British Super Brunch at the Hilton Kuala LumpurWords by Louise Miller, Photos by The Yum List (Monica Tindall)
Monica’s invitation to join her at the Hilton’s British themed Super Brunch was shortly followed with her enquiring, with what I interpreted as more than a soupcon of skepticism, as to whether we Brits actually have enough iconic dishes to fill the promised 1000 square metre spread! Ok, so whilst I concede that my country’s cuisine is not what put the ‘Great’ in Great Britain, we do have some seriously delicious gastronomical fare so I was brimming over with excitement to be culinarily transported back home for the afternoon and to see Monica eat her Yorkshire Puds along with her words.
No sooner had I stepped foot in the hotel’s foyer than I encountered the comforting familiarity of Britishness: a classic red telephone box and letter box faced a proudly parked Union Jack decorated Mini Cooper and the whole scene was overlooked by cardboard cutouts of Premiership football players. The set-up just begged for some silly selfies! Needless to say, I was in my element before even glimpsing the food.
Time for Some Silliness
I took a preliminary tour of the buffet: a reccy at these kind of events is, after all, essential to start strategizing over what to eat and in what order. I was overwhelmed with choices but opted to start with a classic: the Fish & Chips station displayed pretty little newspaper print cones filled with beautifully battered English plaice, a mound of freshly fried chips, a line-up of malt vinegar bottles, tartare sauce and a bowl of peas, more pureed than mushy but delicious all the same. I was impressed by the fish – the super light and crispy batter had obviously preserved the plaice’s delicate flavour and texture during the frying process and had provided a delicious opener to my feast. 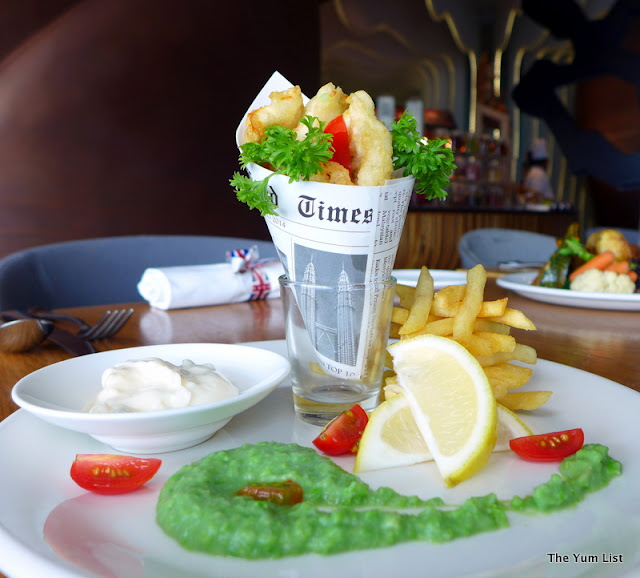 Fish and Chips
A walk around the various stations revealed the many international influences omnipresent in the modern British diet. If those less familiar with GB’s love of Indian food were surprised to see a curry station feature in this British themed spread, they would have been further taken aback by the fact that Chicken Tikka Masala has been our official favourite dish for many years now. Yes indeed, overtaking the more traditional meat pies and Sunday roasts, the richly spiced Indian offering is what we Brits officially prefer and the Hilton’s take on this did not disappoint. We were served up tasty bite size portions of succulent chicken tikka morsels to complement the extensive range of delicious curries on offer in the buffet. These were so good that I couldn’t resist returning for a second helping despite wanting to leave room for much more. 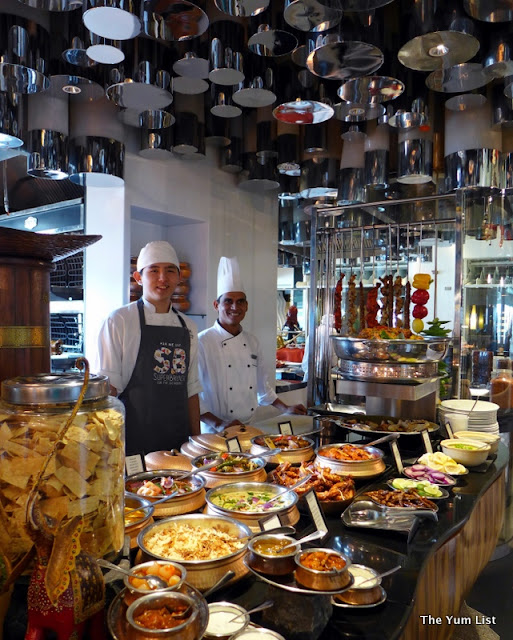 Indian Station
Around the corner from the curries was the Lamb Doner Kebab station, another potentially surprising component of a British themed buffet but one whose place was fully deserved in my opinion since this Turkish skewered and sizzling lamb meat tower has come to be symbol of weekend indulgence particularly at the end of late night partying.
In addition to these well loved culinary imports, it was great to see that the Hilton’s restaurants were showcasing some of their menu’s highlights so for those who weren’t as overcome with excitement as I was at the idea of sampling some of the best of Blighty’s dishes, there were plenty of other options such as Chambers Bar and Grill’s tantalising grilled skewers, Chynna’s Peking duck pancakes and Iketeru’s sumptuous sushi spread. As tempting as these were though, I was heading back to more familiar territory for my fourth course. 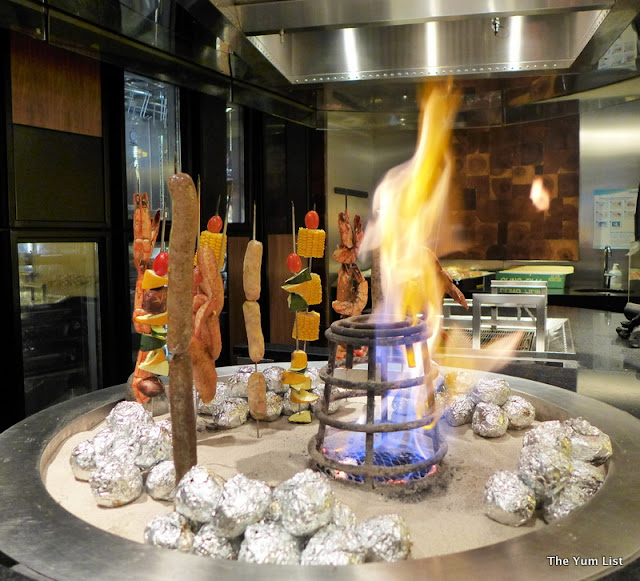 Japanese BBQ
I’d hovered around the Roast Beef station for long enough, drooling over the enormous joint of meat. Executive Chef and fellow Brit, Warren Brown, informed me that this Australian Wagyu leg had weighed in at a staggering 47.5kg, had been roasted for 10.5 hours and was unsurprisingly the biggest whole leg of beef ever cooked in Malaysia. I couldn’t wait any longer to try it. I asked for some nice pink slices, accompanied them with roast potatoes, vibrant veggies, rich gravy, creamy and punchy horseradish sauce and Yorkshire puddings. Ahhhhhh! There is something so very comforting about this Sunday classic: the meat was melt-in-the-mouth tender and flavourful; the roasties perfectly crisp on the outside and fluffy within; the Yorkshire Puddings, which, for the uninitiated are a British staple made from batter and usually judged on the height of their rise in the oven. Originally conceived, it is thought, to fill the stomach with low cost ingredients so that one would not eat so much of the expensive meat, these fluffy beauties make great receptacles for gravy. 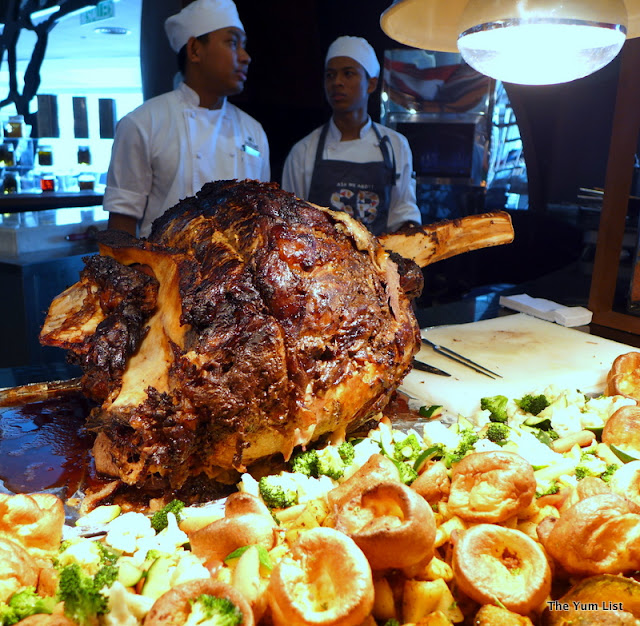 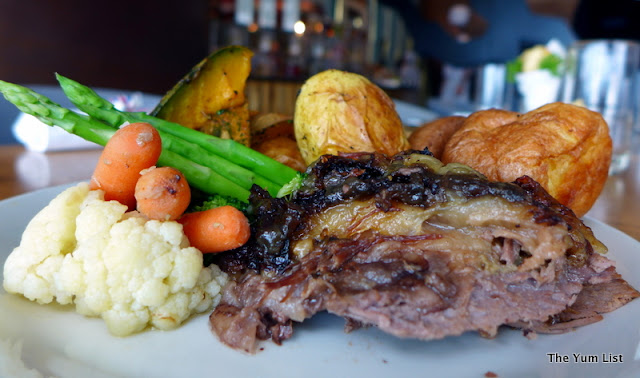 Roast Beef
I was starting to feel quite full at this point and still had so much to cover but such is my commitment that I ploughed on, this time with a visit to the cheese station. Like everything else, the presentation here was just stunning – huge cakes of Stilton, Parmesan and all manner of Cheddars, smoked cheeses and creamy goats’ cheeses were accompanied by an impressive range of homemade breads including grossini, ciabatta, pure rye and multi-seed varieties. I would have made many return visits if I hadn’t needed to somehow fit in dessert. 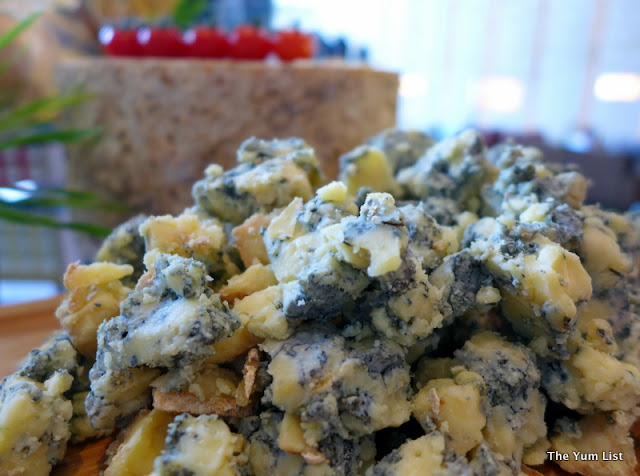 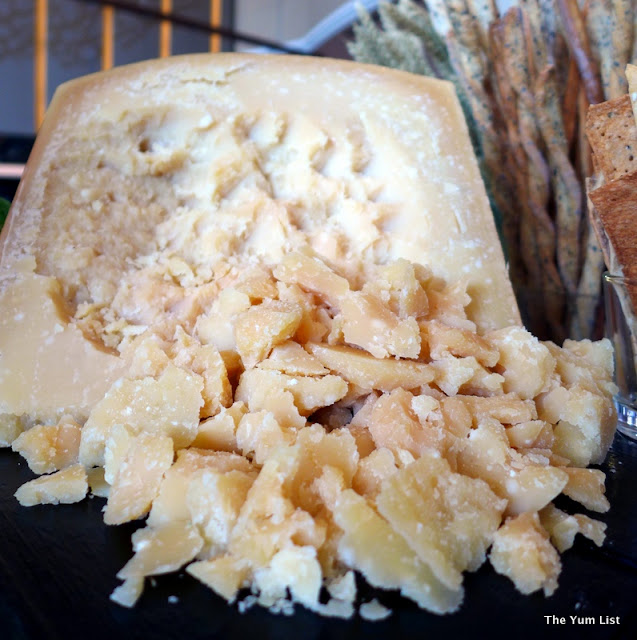 Cheese Glorious Cheese
Before making my way to the huge spread of sweets, I took a detour via the crumpet station where the chef on duty was making crumpets on demand. I drizzled a few of these with butter and strawberry jam and took them back to our table to share with Monica who agreed with me that they were the lightest and most delicious crumpets we’d tried. 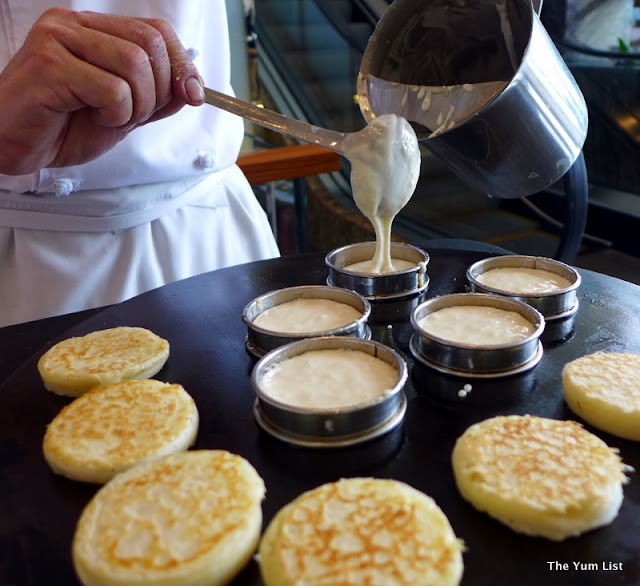 Crumpets
All that remained now was the desserts. Well, I say ‘all’ but actually this area of the Super Brunch spread was quite overwhelmingly well stocked. Amongst the abundance of mini lemon curd tarts, blueberry cheesecakes, London themed cupcakes and shortbread sandwiches, lay a couple of two metre long cakes. The first was Almond and Apple in flavour and the second, a Super Moist Chocolate Cake lived up to its name courtesy of the mayonnaise that had been used in the sponge base – an unusual ingredient in a chocolate cake but please trust me when I say that this worked!

Two Metre Long Cake!
In addition to the cakes already mentioned, there were, as you might expect, a couple of fruit crumbles, a chocolate and plain Bread & Butter Pudding, eight different ice-cream flavours, Trifle and Eton Mess, so beautifully presented in little shot glasses that its name seemed highly inappropriate.

Eton Mess
And at the end of all of this indulgence, I was very happy but in need of a lie down! Now brace yourself for some bad news… the British themed super brunch (RM199 nett) was actually a one off event to culminate the month long British food festival which also featured an audience with British celebrity Michelin star chef Gary Rhodes, a Twinings Tea Dinner and an English afternoon tea buffet and Bond extravaganza. The good news is that the Hilton are planning more Super Brunches in the future. I pleaded with Executive Chef, Warren Brown to repeat this fantastic British spread some time soon as I know so many people who would have loved the experience as much as I did. I guess we’ll just have to keep our fingers crossed and check their website for upcoming events.
Reasons to visit: a fantastic spread full of great features the ultimate highlights being roast beef and crumpets. Great service and a lovely ambience in which to spend a leisurely and indulgent three hours.
www.hilton.com