If you’d follow this blog long enough, you would know that I’m a huge fan of Korean cuisine. So when I first heard about the newest Korean BBQ restaurant to hit Malaysian shores – distinguished by its 8 flavored pork bellies, I knew it wouldn’t take long for me to pop by.
Palsaik Korean BBQ Malaysia
Early 2014, Palsaik opened it’s doors in the quieter side of Soho KL, at Solaris Mont Kiara. 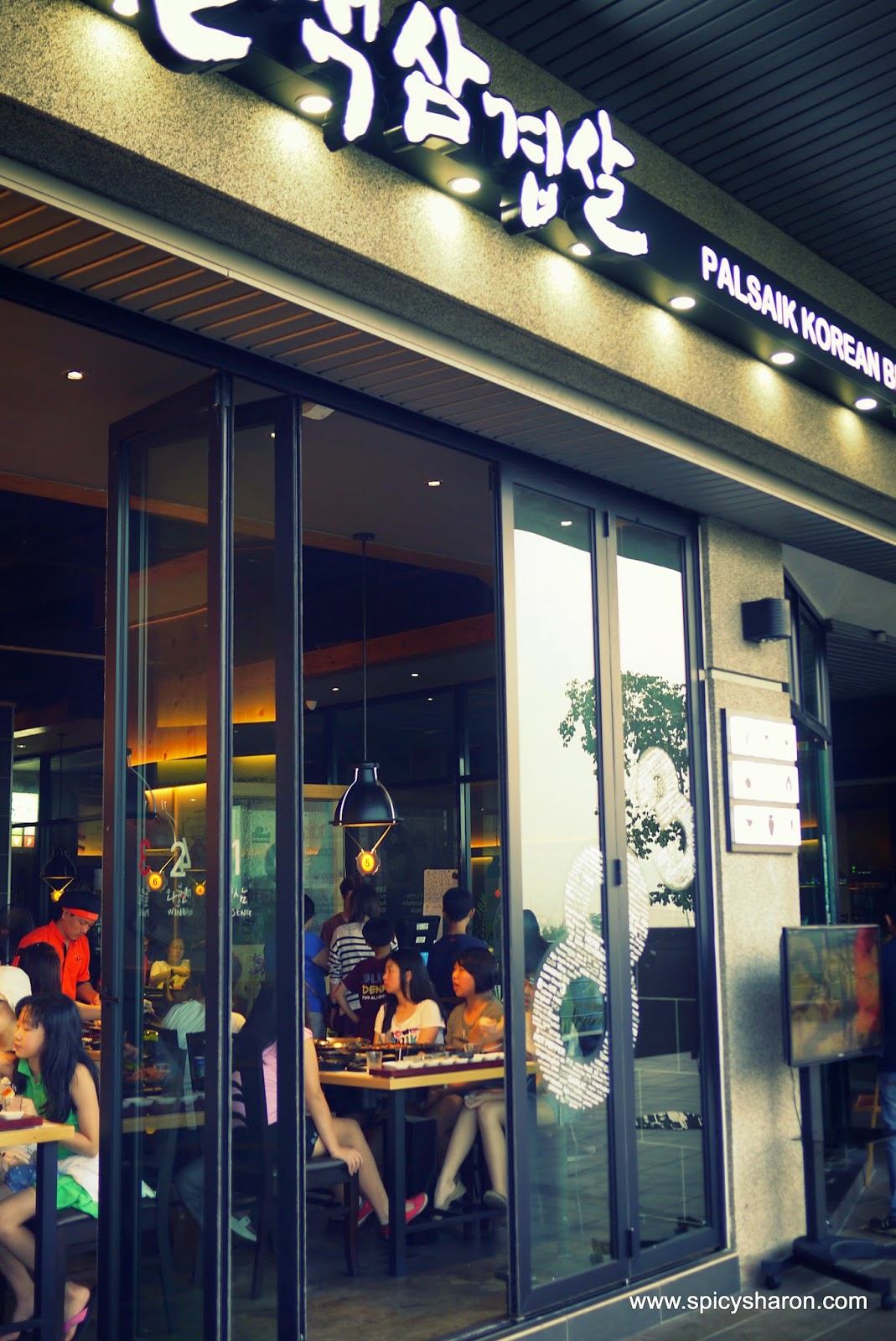 I was there on a Sunday evening, along with 4 of my friends in tow. Thinking that pre-bookings are non-essential for a Korean BBQ restaurant, we got there at slightly pass 6pm and was greeted by a crowd of early-comers already waiting outside the restaurant. One look into the restaurant, I noticed a handful of unoccupied tables – some waiting to be cleared and some reserved – or so we’ve been told. It was about 30 minutes before we were ushered inside. You may want to make reservations prior.
Air conditioning and ventilation was terrible. Despite the size of the restaurant, there were only one main air-conditioner. With the sweltering evening heat and the lack of cool air, we were literally sweating buckets. Imagine how’d it be like during noon! 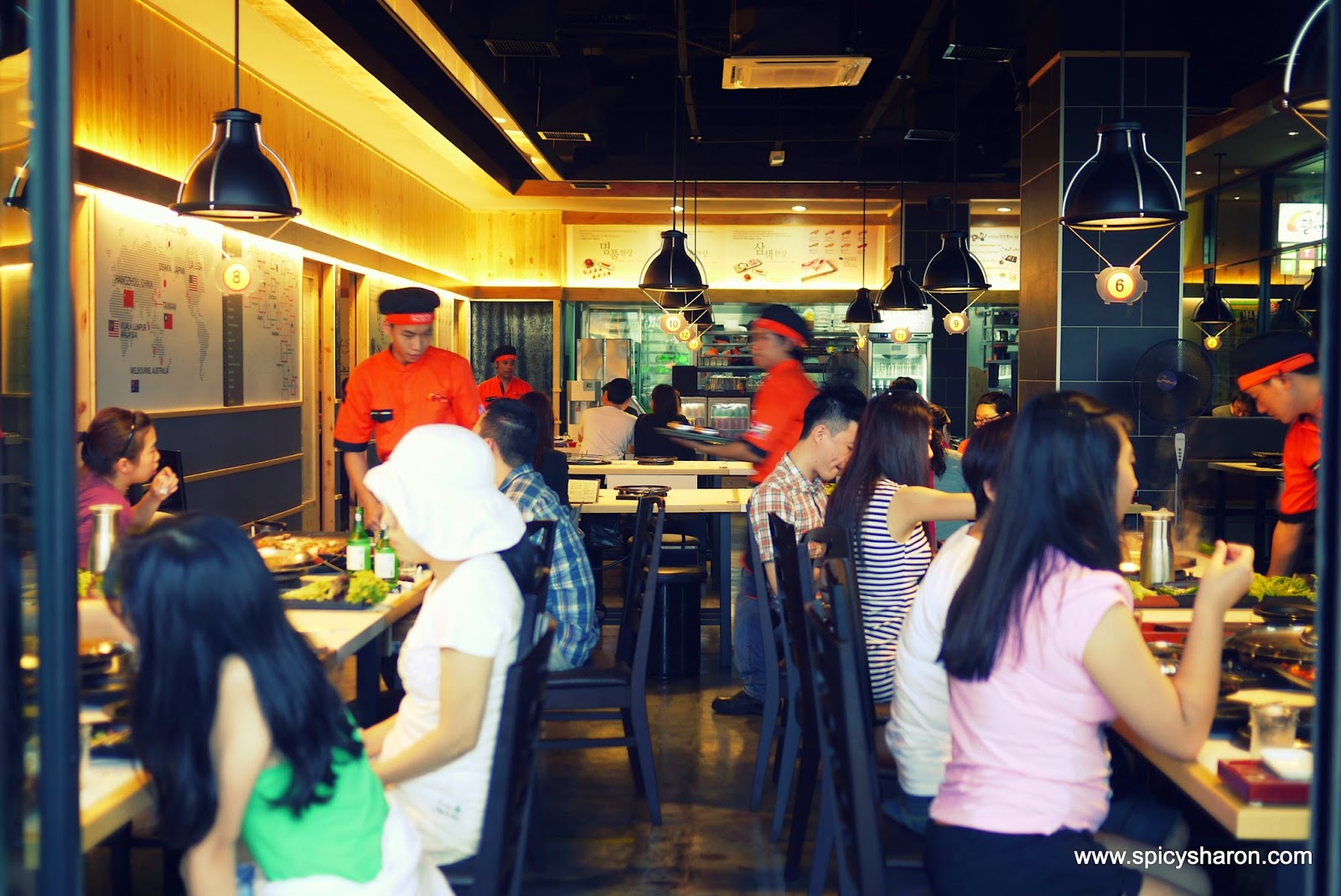 The thing about eating here – you’d have to come in at least a group of 3; the essential set meals are meant to be shared among 3-4 persons.
The menu is quite narrow with not much to choose from. I was combing through the drinks section, scouting for an order of Korean tea, but realized that they don’t even have that. Water only please! Mul-cu-seyo! 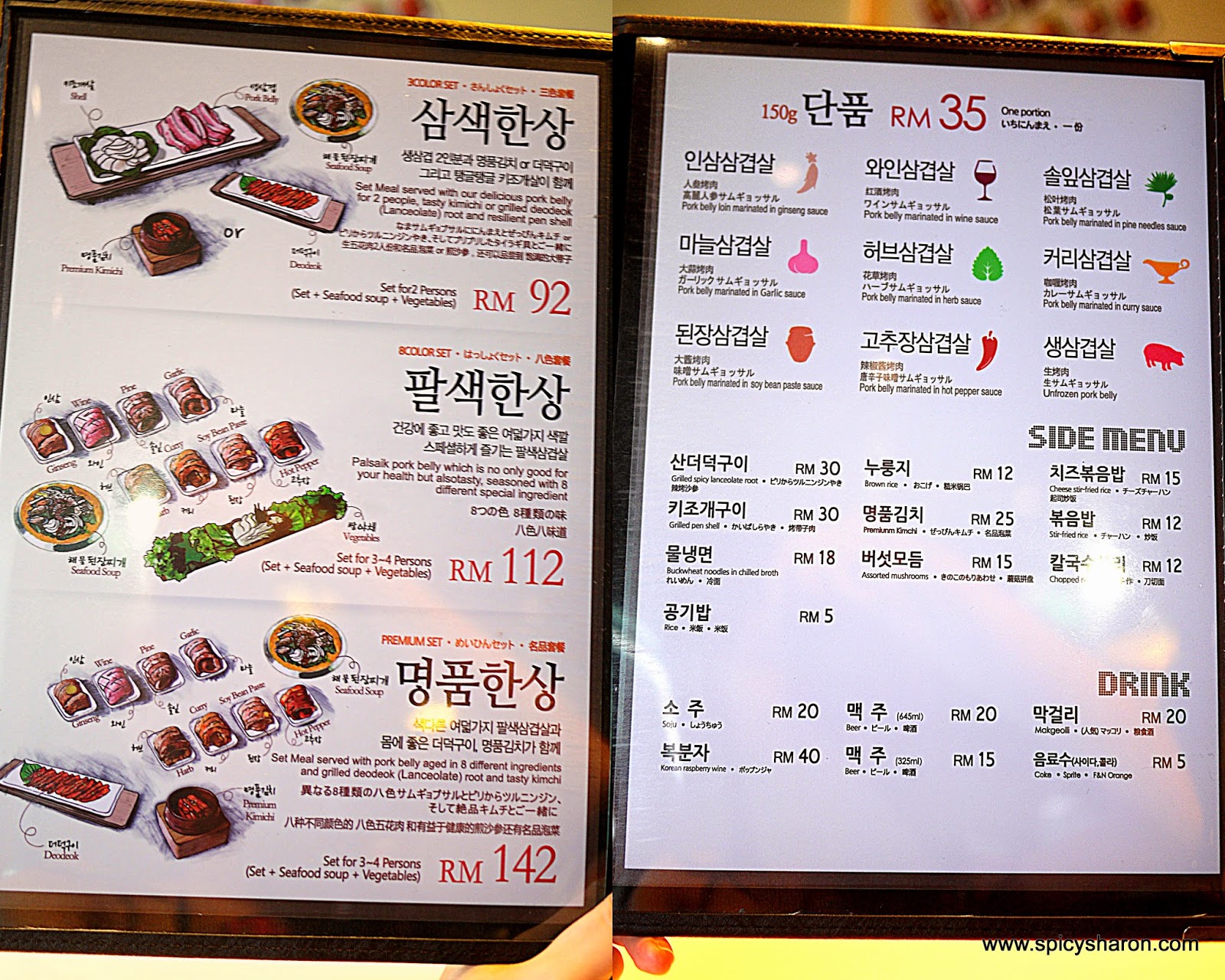 I was really looking forward to sampling some banchan (side dishes). Sadly, none was served. Now, let us just patiently wait for those scrumptious pork bellies shall we?
8 Flavored Pork Belly. 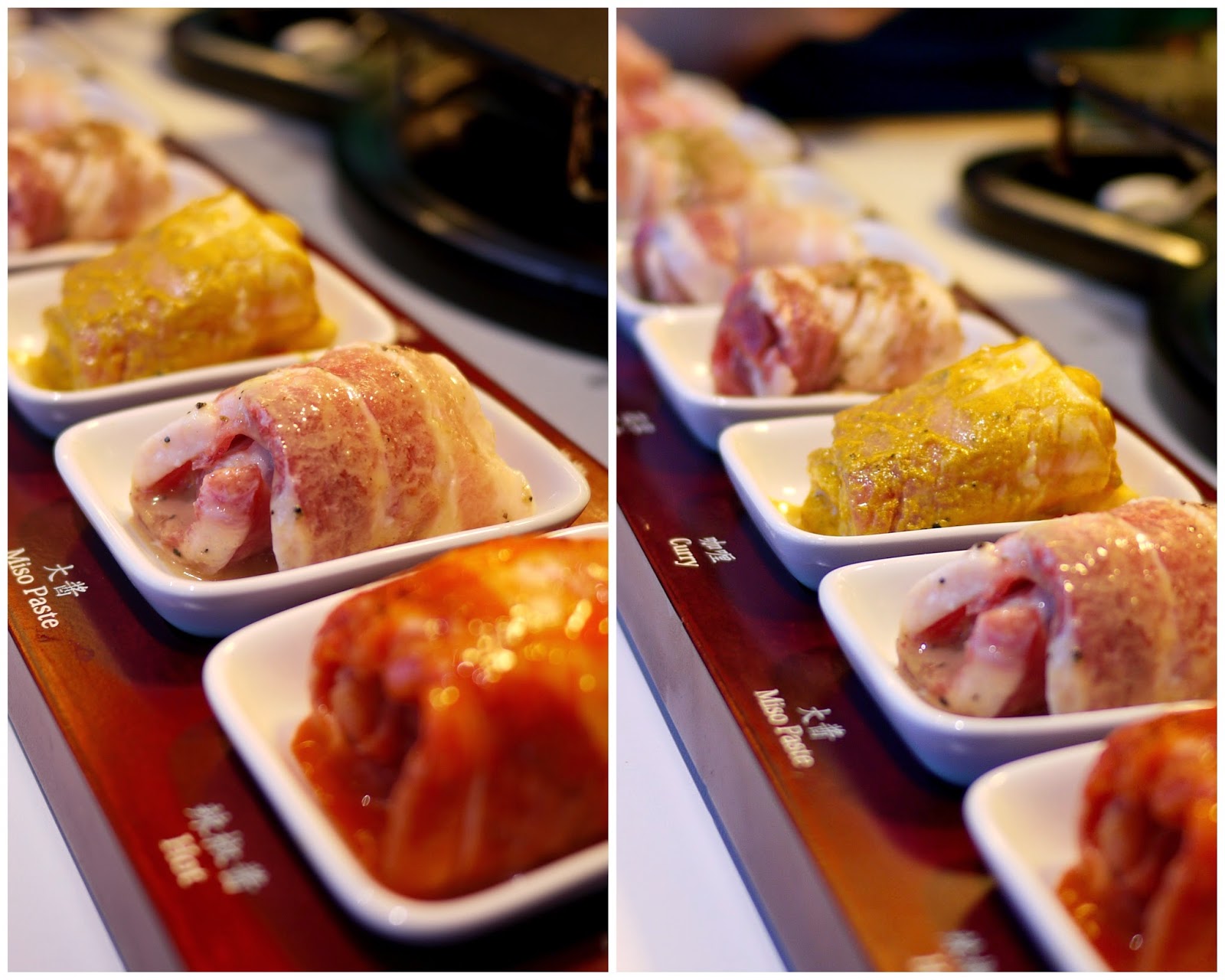 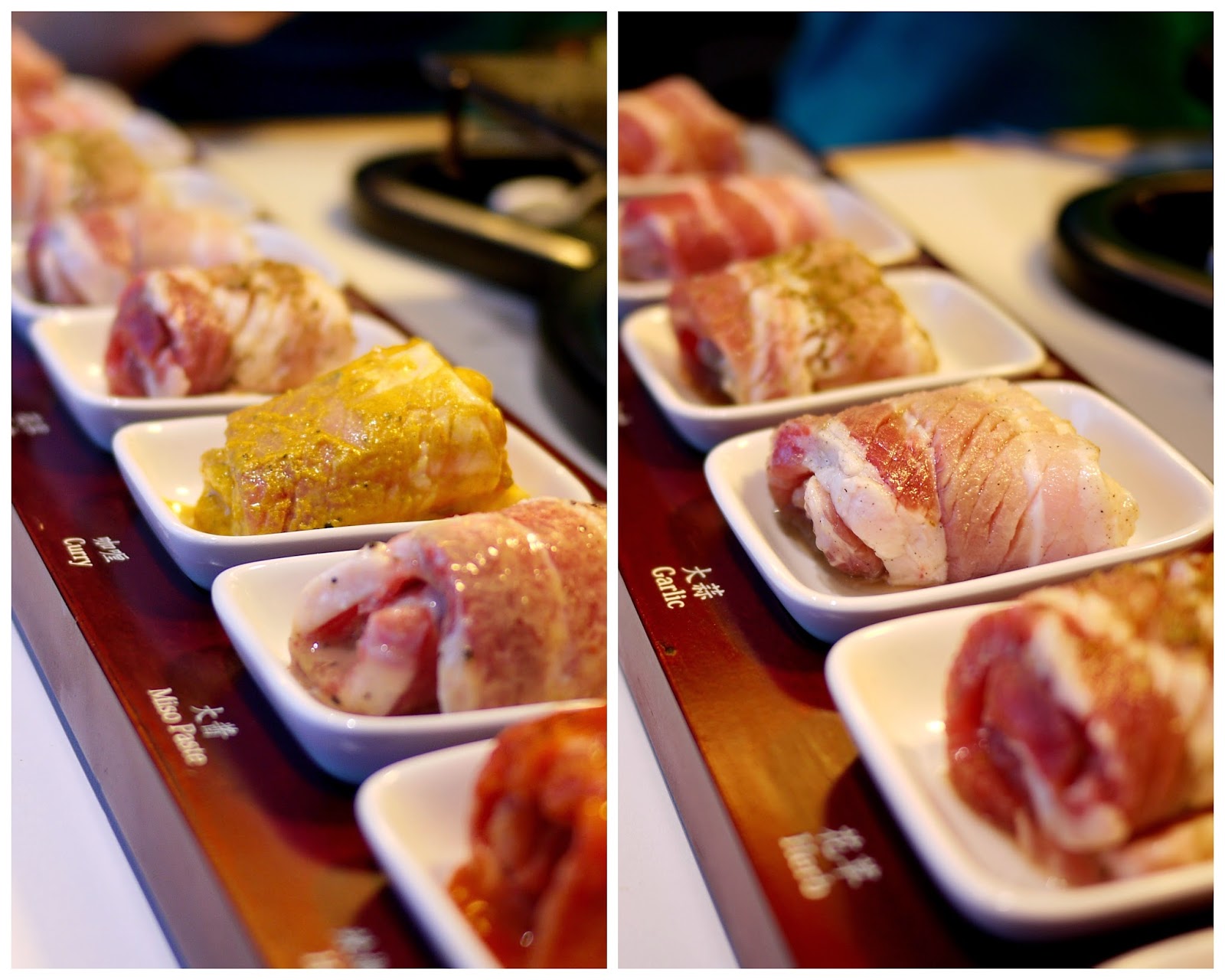 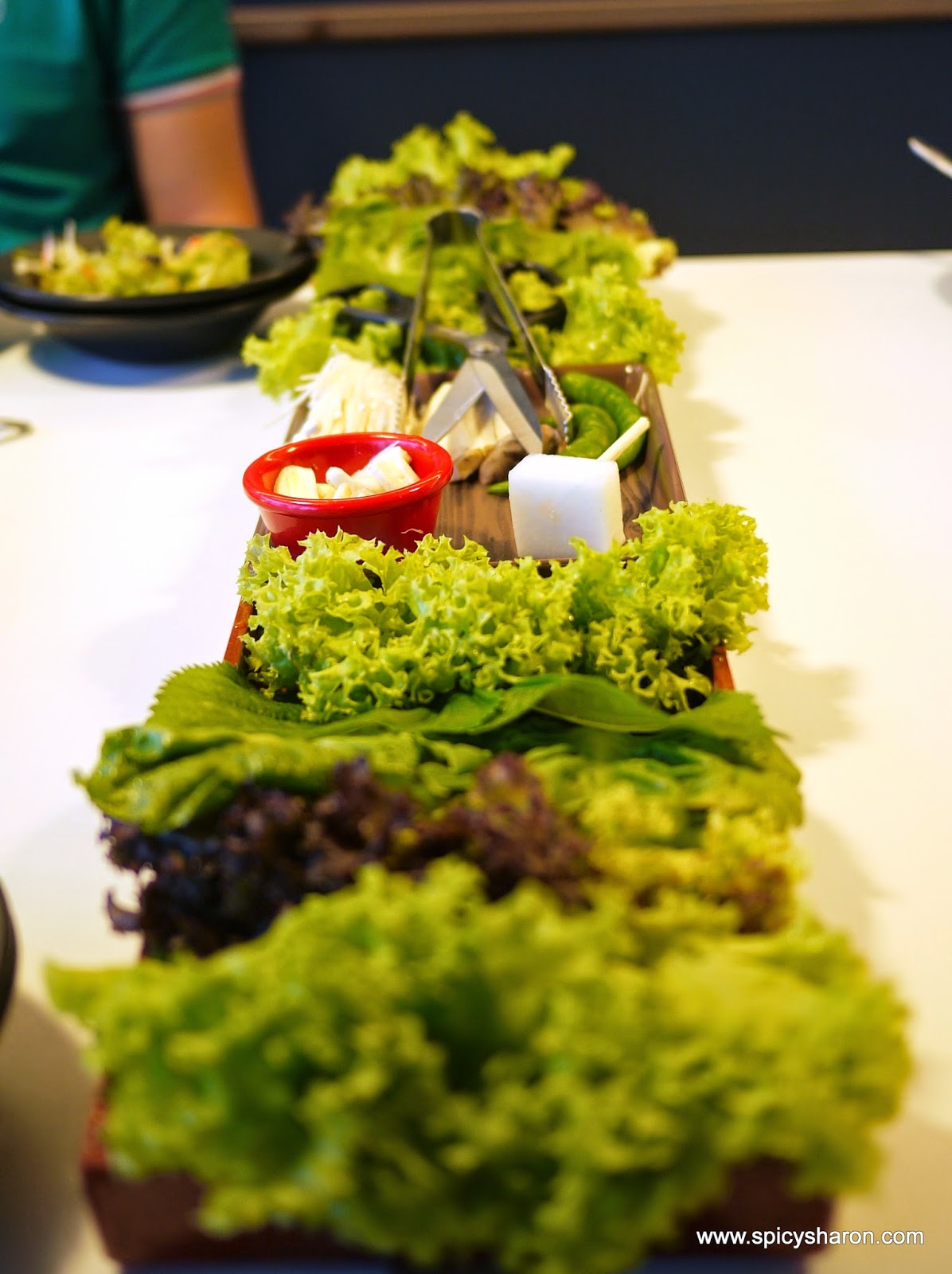 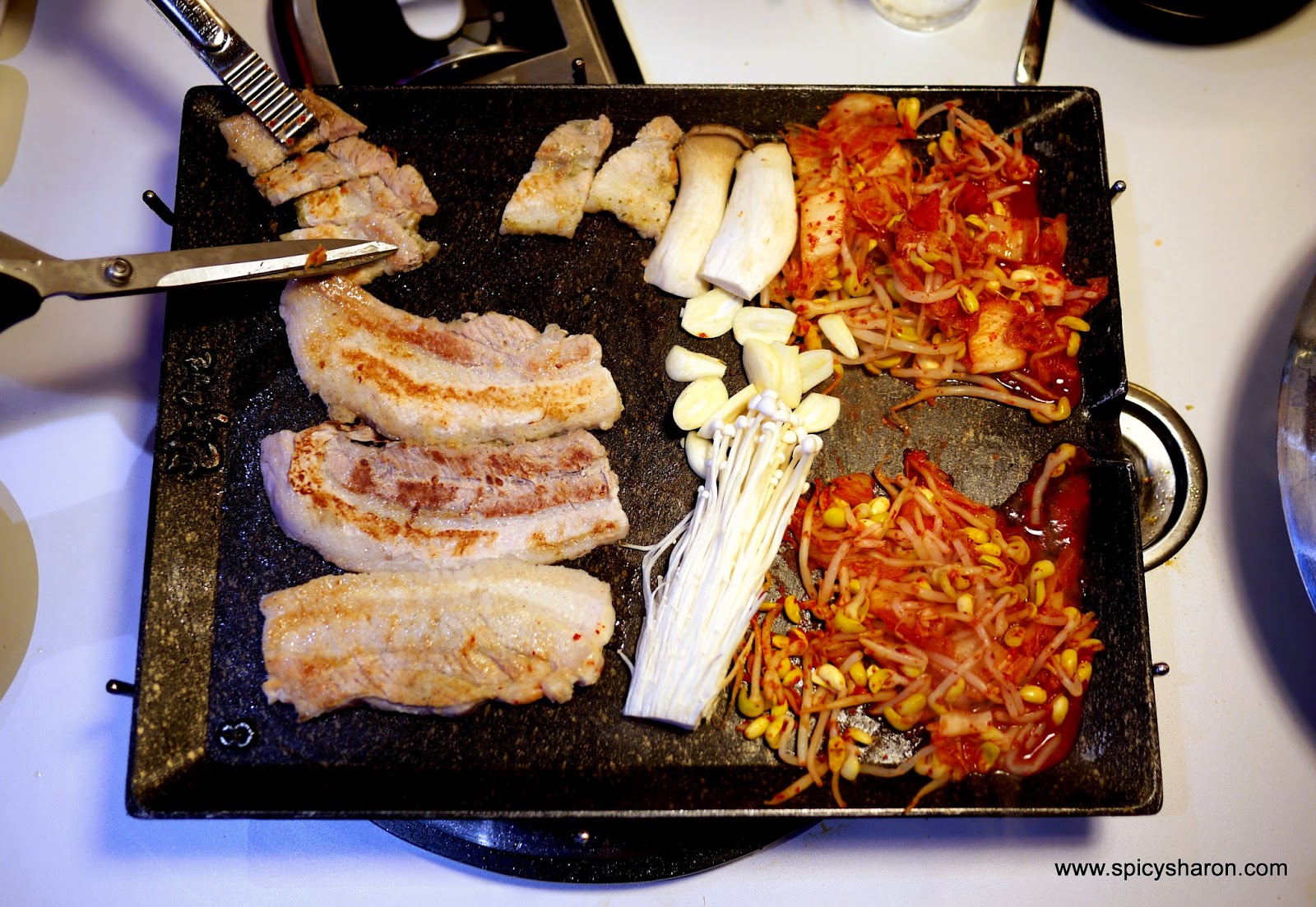 You can’t imagine the excitement when the pork arrived. Everyone was wrestling for a photograph!
Palsaik – 8 rolls of flavored pork bellies. It is meant to be eaten in sequence, from left-to-right for maximum tingling of the taste buds. That said, despite strictly following instructions, the entire lots tasted rather identical to me, evident from the lack of marination and flavoring. My favorite among them all – Hot. And that’s the last flavor.
Seafood Soup. 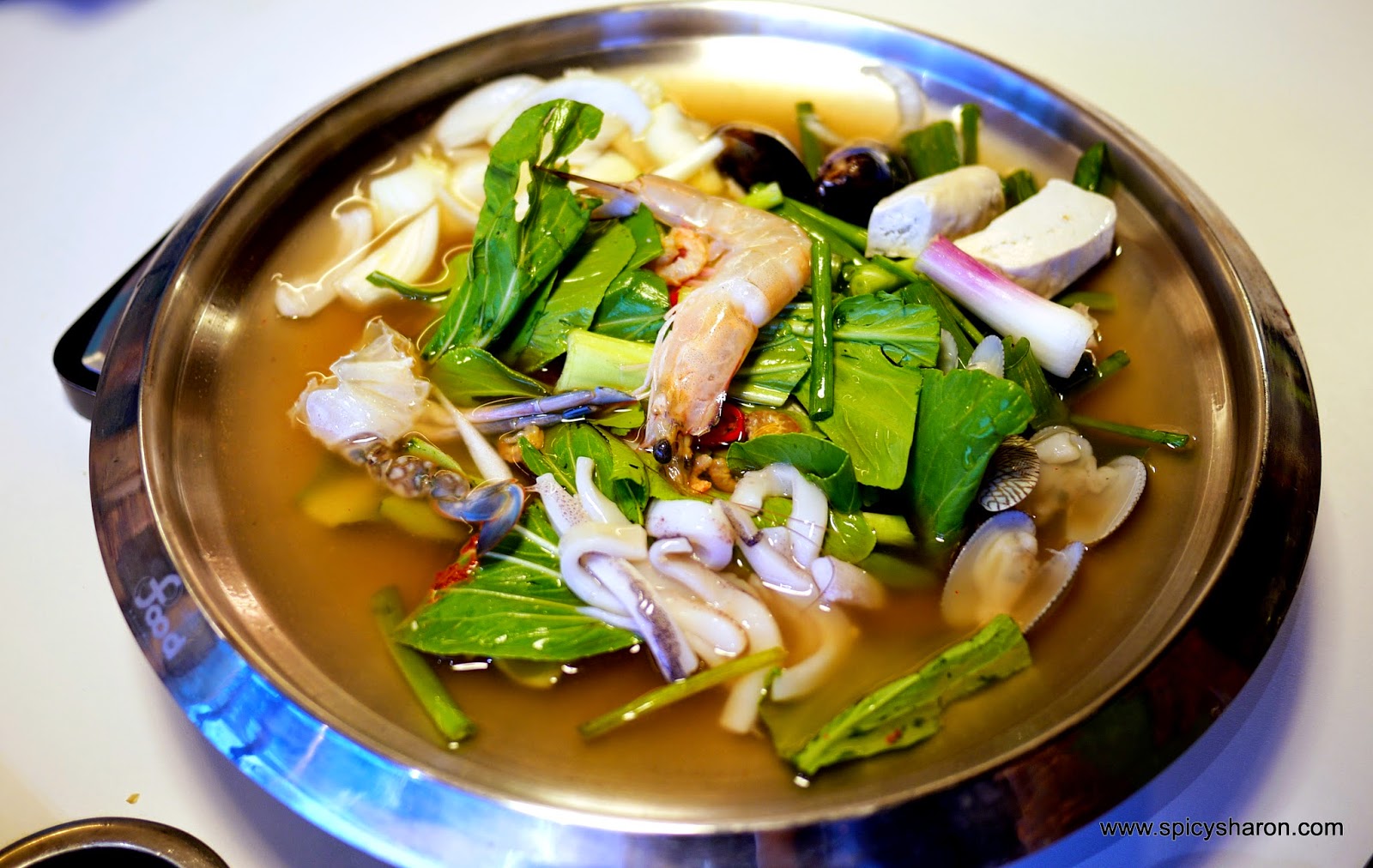 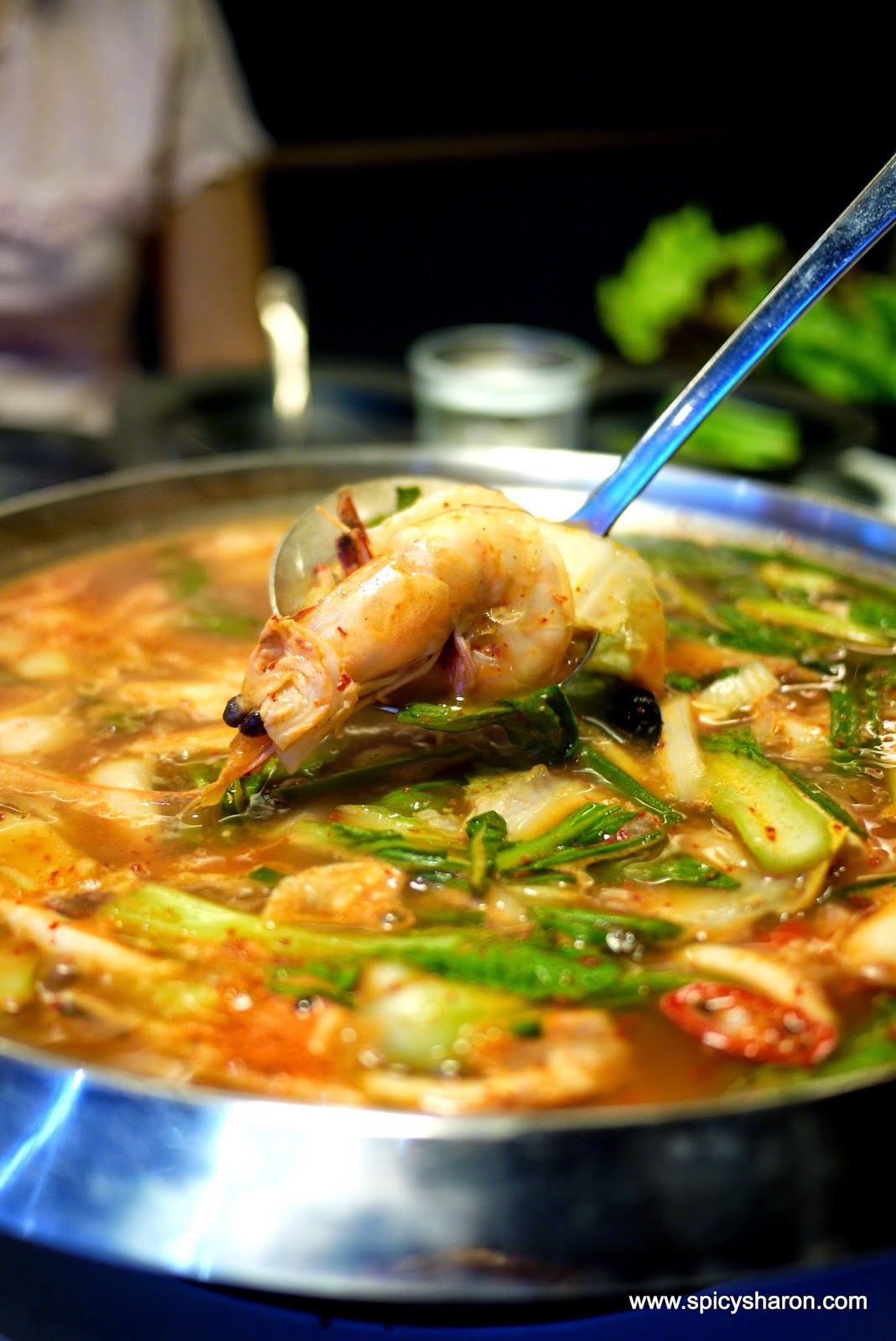 An enticing pot of bubbling seafood soup that came together with the set meal. It had an abundance of seafood and greens inside. Fiery no doubt, but my friends were raving about how good this was. 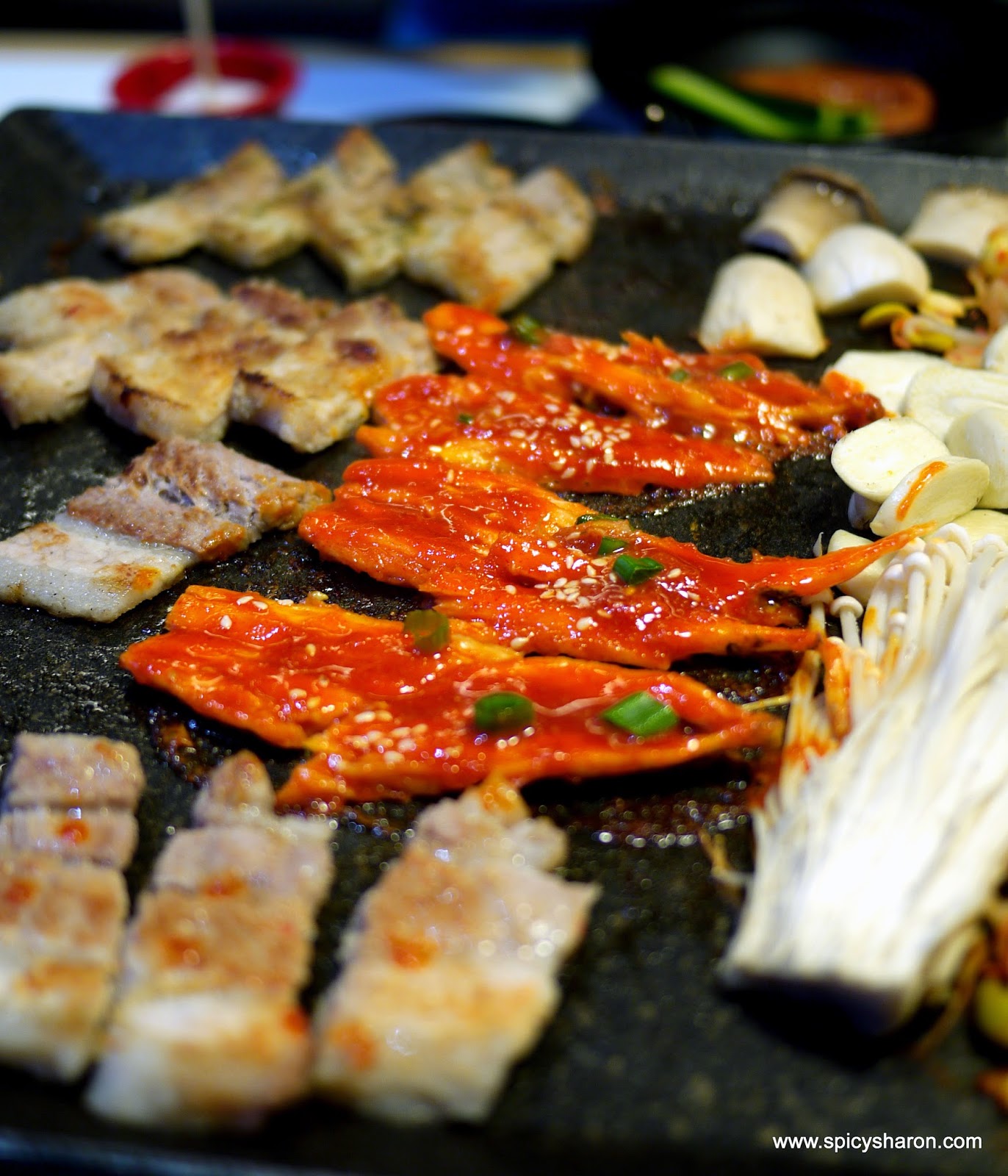 We weren’t entirely sure what this was at first. It looked like slices of fish but was spicy and had rough and fibrous textures, like dried-up cabbage. After what seemed like mass contemplation, finally someone said, “Hey, I think this is ginseng root.” Right. Not a fan though. 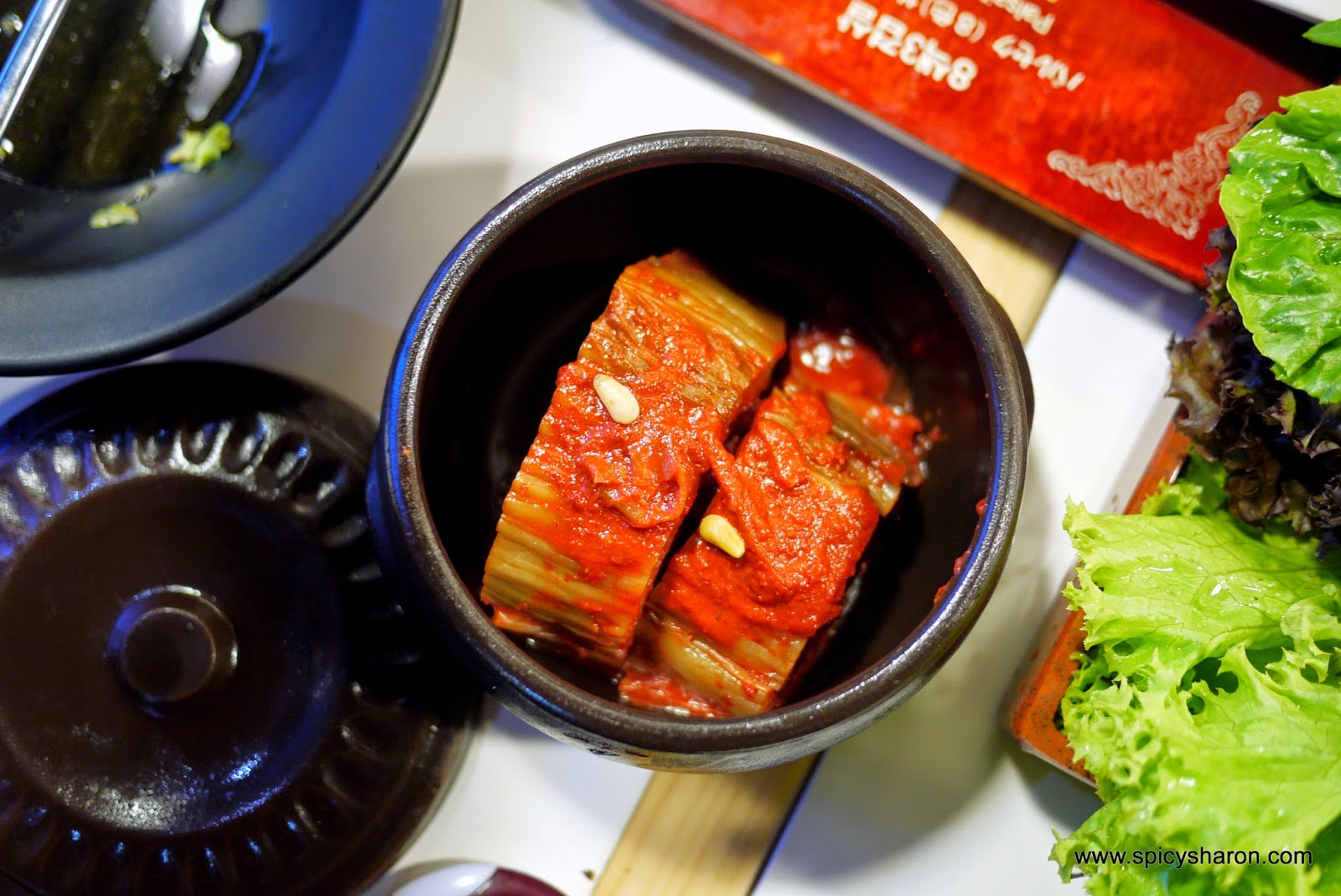 Many would probably find this very distasteful – 1 year old fermented kimchi. Kimchi typically have a maximum shelve life of about 2 years. As the vegetable aged, it becomes more pungent, sour and spicy. I wasn’t too fond of this nonetheless. Don’t get me wrong, I love my kimchi. In fact, it’s my daily staple. Yes – I have this almost everyday, but I had a tough time wrapping my taste buds around this.

Overall Rating: 6/10. Perhaps a little over-hyped for now – the pork bellies came slightly below expectations. It wasn’t as tantalizing and as flavorful as we hoped, with almost all of it tasting identical. The condiments that came with it – ginseng root and 1 year old kimchi, seemed a little far fetched for the Malaysian taste buds. We had a less than stellar experience in terms of customer service also. We ended up doing most of the barbecuing ourselves, which we really didn’t mind. But the fact that even getting water and sauce refills was dawdling, I thought customer service really needs to buck up. New restaurant syndrome – again, perhaps. Furthermore, with it’s limited menu offerings, it would be hard to convinced of a revisit any time soon.
Address: J-01-09, Soho KL, Solaris Mont Kiara, No.2 Jalan Solaris, 50480 KL.
Phone: 03-6211 0383
Opening Hours: 11.30am onwards daily

Located inside Soho KL, at the topmost floor, tucked at the far end, facing the main roads.