Our evening started at Fluffed, where we unintentionally overordered and stuffed ourselves sweet with one too many waffles and cakes. We then drove to Walffeine, a new cafe located just minutes away from where we were, and sample some savory waffles after that.

It’s pretty obvious that I was on a waffle streak that evening. Let me now start with Fluffed Cafe & Dessert Bar. 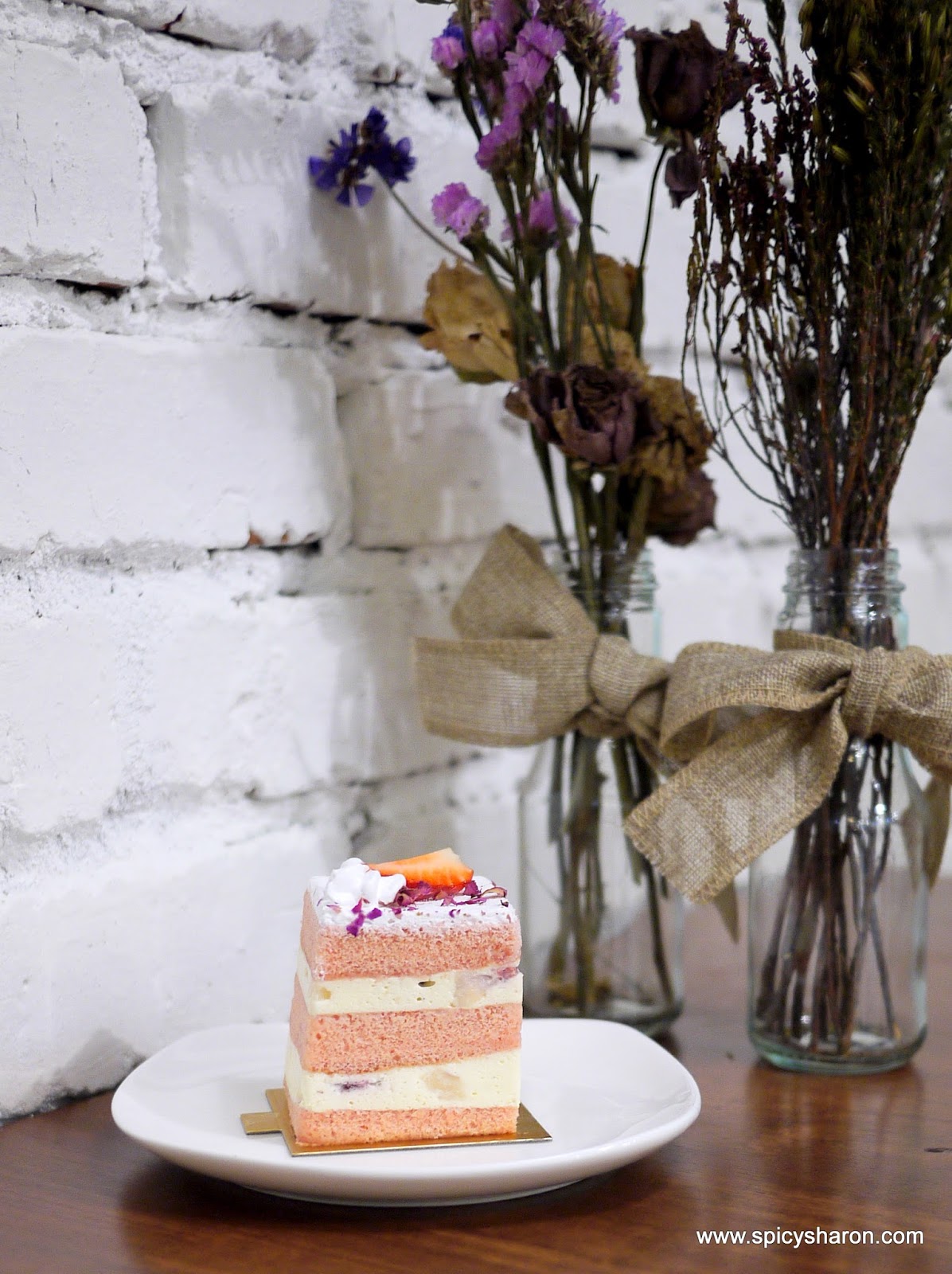 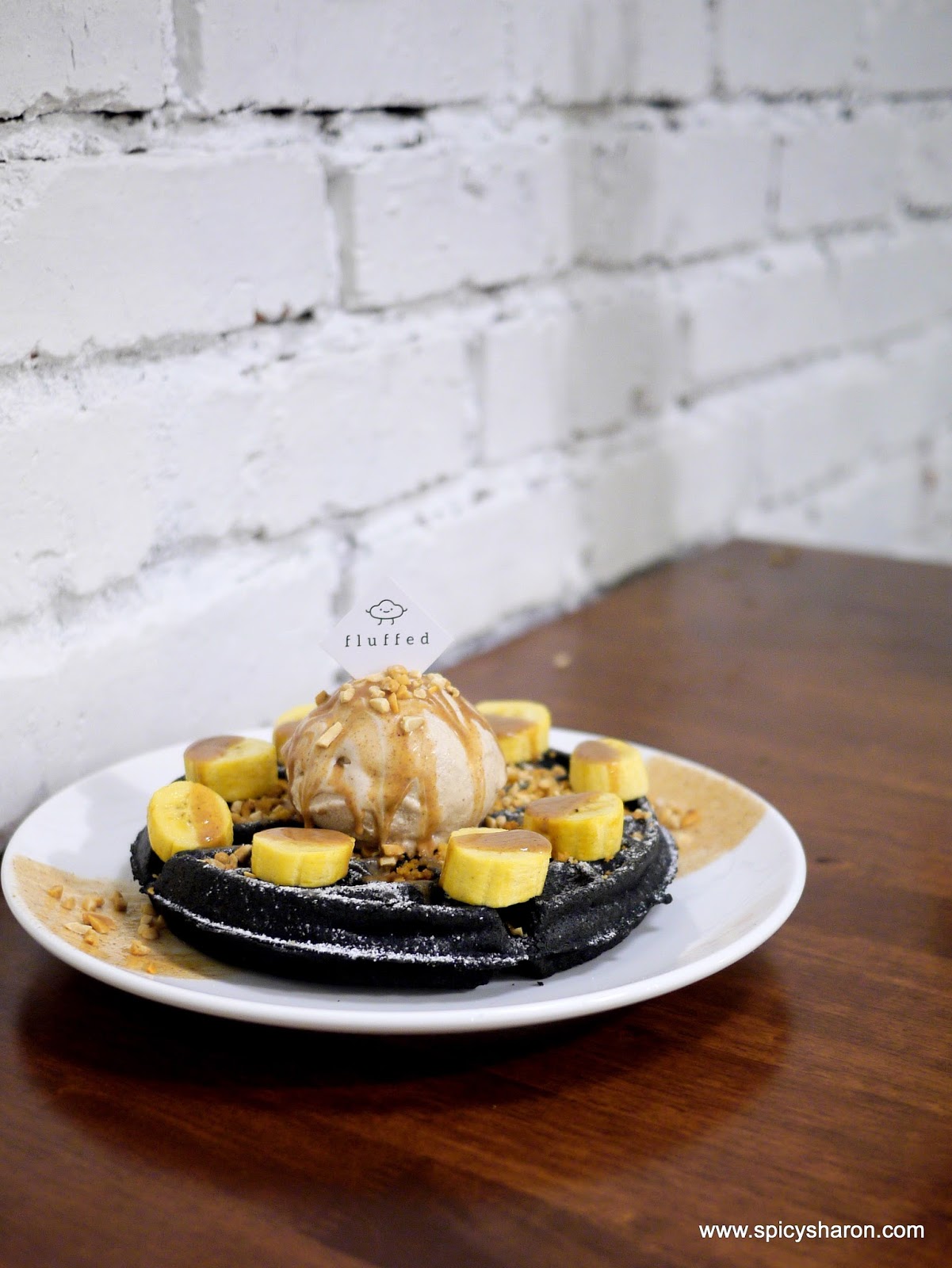 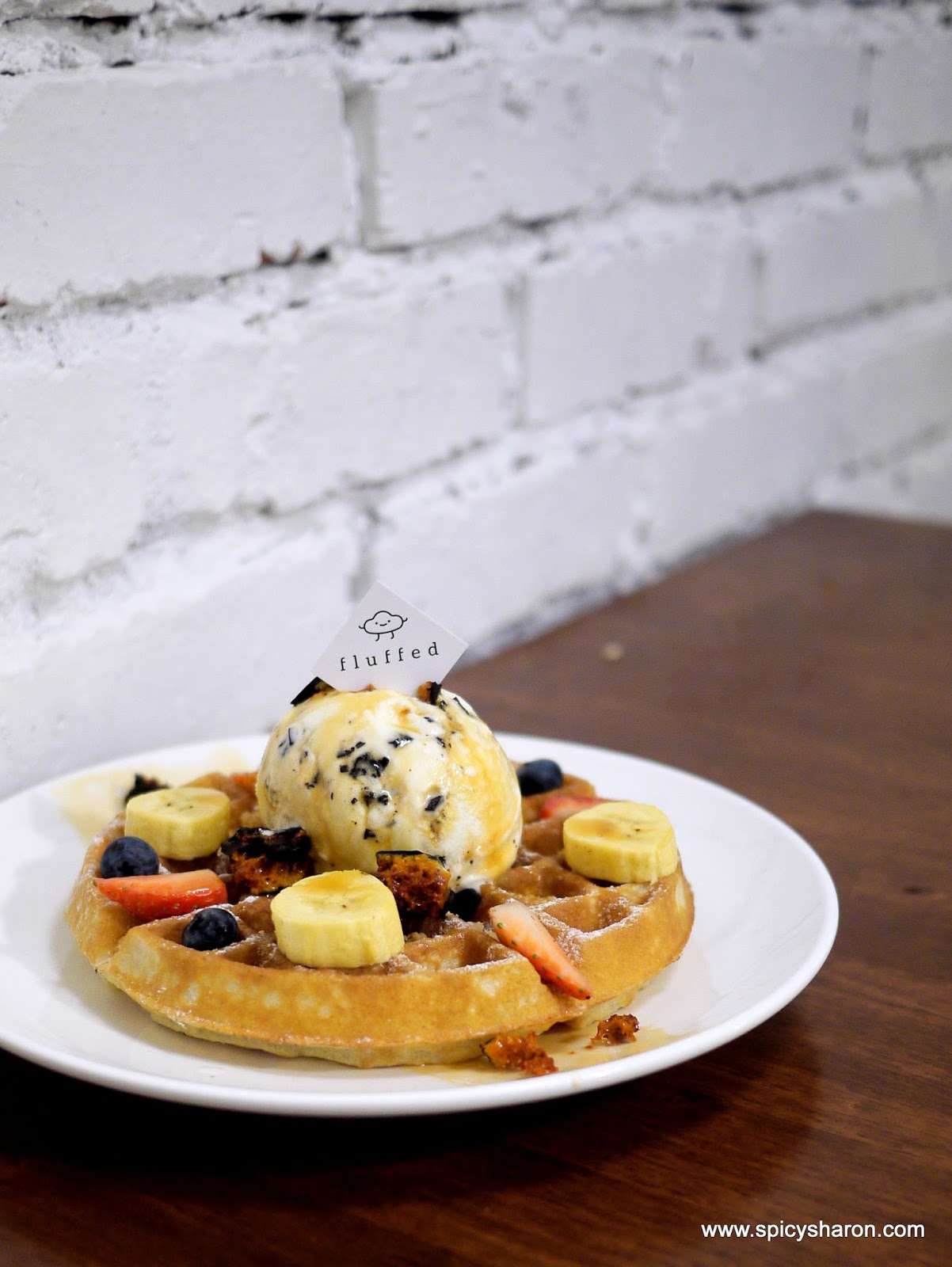 Pooh Bear’s Favourite (Rm18) – Hokeypokey ice cream, salted caramel, crushed honeycomb and fruits.
Overall Rating: 7.5/10. Being a huge fan of honeycomb treats, I really liked the Pooh Bear’s Favorite, and especially the marvelous homemade hokeypokey ice cream. My friend on the other hand preferred the Snoopy & Peanut, which I thought had far too many peanut elements in it. All in all, the waffles were fantastic – crisp on the outside and fluffy inside. That said, the Snoopy & Peanut weren’t evenly toasted, patches of it were soft, though still gratifying overall. I would also highly recommend the Rose Lychee Cloudcake. 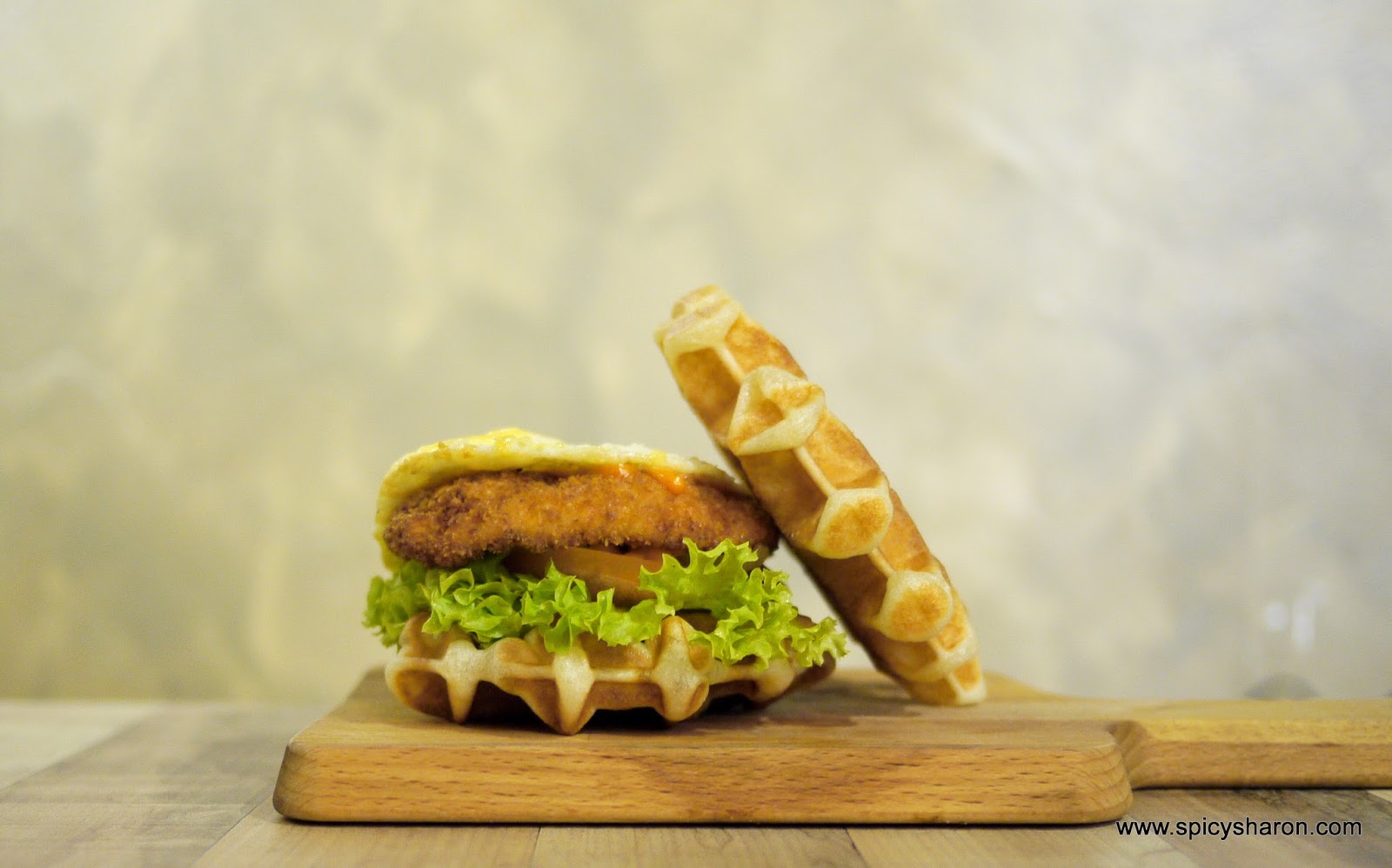 Next up, we drove to the newly opened Walffeine, some 2 minutes away from Fluffed Cafe & Dessert Bar.

To be honest, the cafe didn’t looked welcoming at all on first sight. Both the exterior and interior looked as though it used to be a phone shop or nail parlour, that was incompletely transformed into a cafe after that. Talk about cutting cost. Nevertheless, I didn’t let my initial judgment cloud the overall experience, we stepped into Walffeine in dire excitement to eat.

Prices for plain waffles range from Rm3.90 – Rm7.90. Prices for sweet and savory waffles with toppings, goes from Rm15.90 onwards. 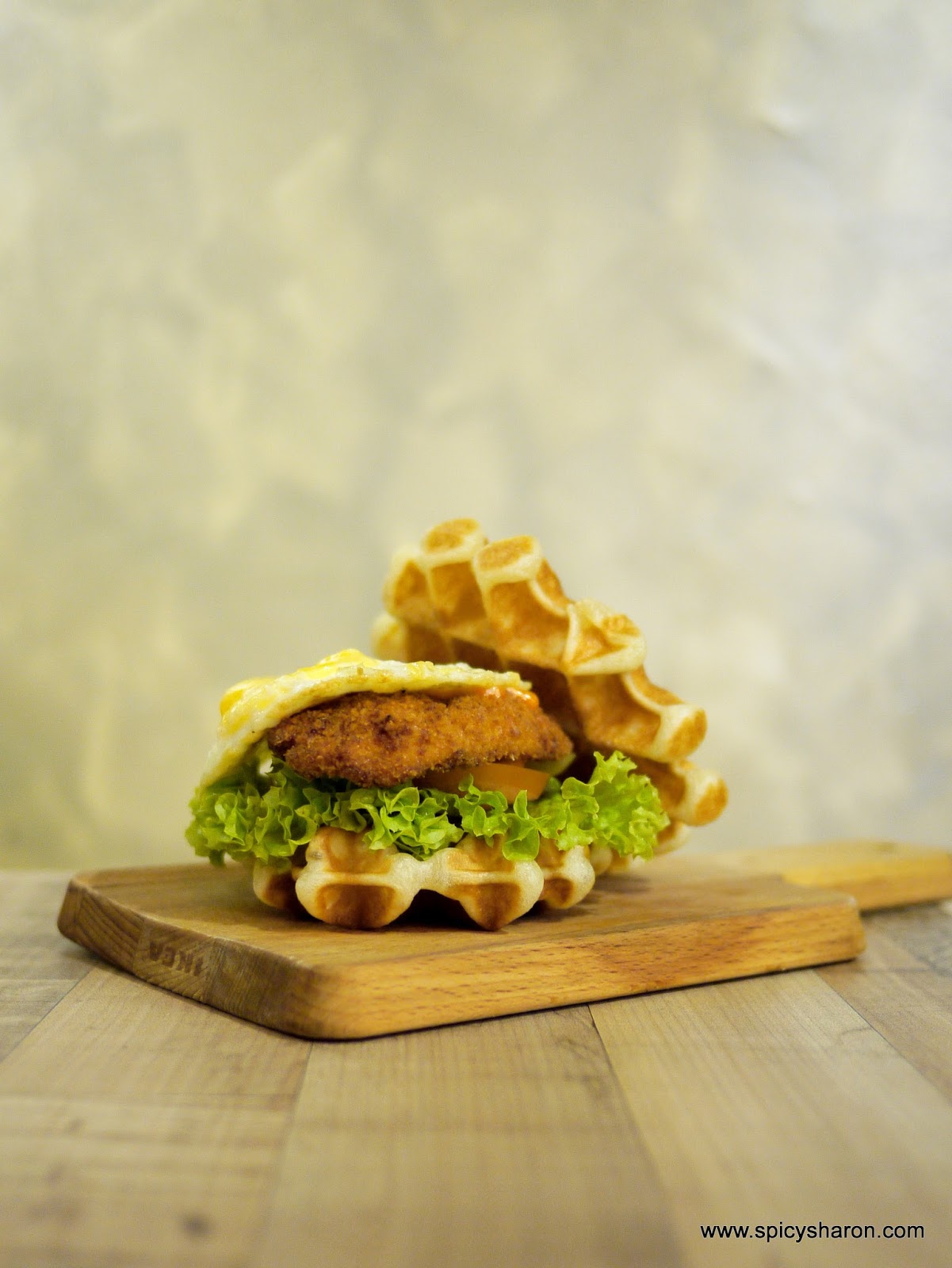 Australian with Chicken (Rm16.90) – Waffle, lettuce, tomato, fiery mayo, fried egg and fried chicken fillet.
Overall Rating: 5.5/10. Seriously, where’s the chicken? I was really looking forward to having a juicy chicken fillet that evening, but was disappointed with one that came with more batter than meat instead. The waffles on it’s own was good, but the chicken was extremely meager in size and very mediocre in taste. For that portion and price (no sides, you get only the burger), Walffeine’s waffle burger was a huge letdown for me. I don’t think I will return in the near future.
Walffeine is located at:
Address: No. 29, Seksyen Petaling Jaya,, 46300, Selangor, Jalan 21/17, Taman Jaya, 46300 Petaling Jaya.
Phone: +603-7877 7532
Opening Hours: 12pm – 11pm Tuesday – Sunday. Closed Monday.