There were a handful of pie-centric cafes that sprouted up in the Klang Valley in the past couple of months. It was only about time that I dip my foot into the newest foray into all-things-pie. If only one of ’em sets the formula right, I reckon – pies could be trend setting as the next-big-cafe-thing.

So, did A Pie Thing managed to jump start the pie trend?

The shutters were barely half opened when I stepped into A Pie Thing that Sunday evening. I was quite surprised to find a few tables already occupied with hungry patrons busily devouring their pies.
A Pie Thing only opens from 4pm onwards till all pies are sold out. This is in fact my second visit here. My first attempt were obviously unsuccessful since that was for lunch. Nevertheless, I’m so glad I came this time round. 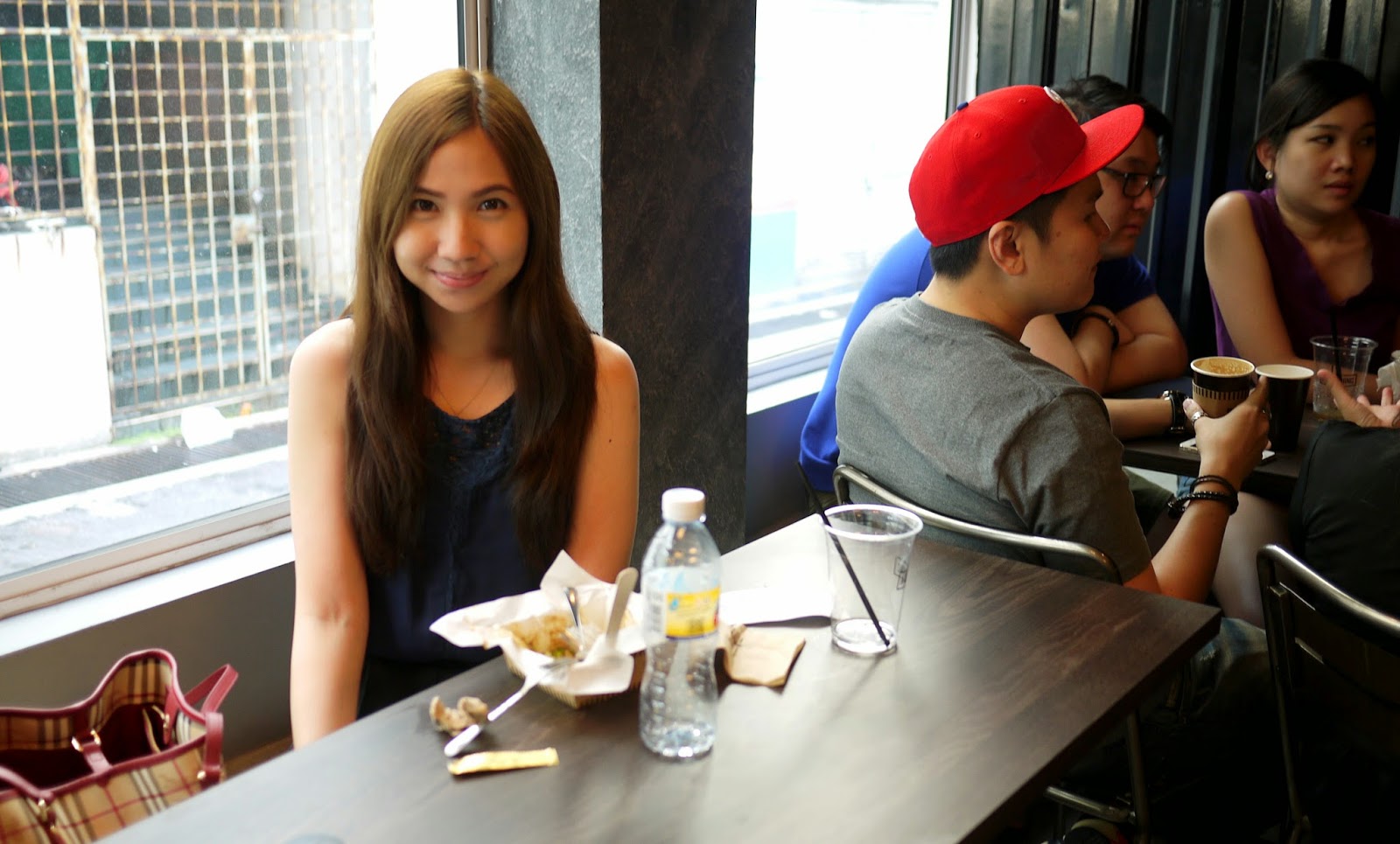 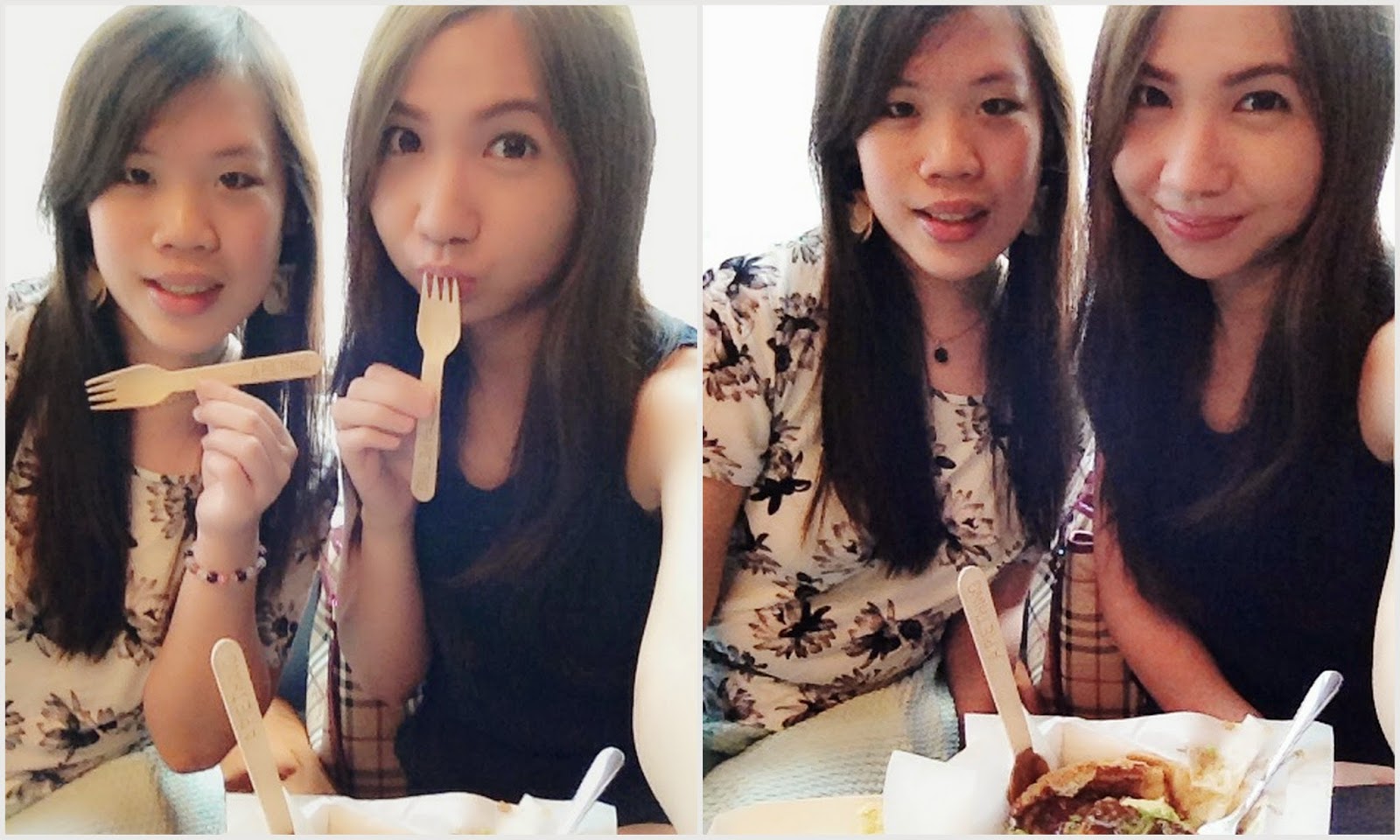 Simple menu board hung high. On the left, there’s the drinks menu – coffee, tea or soda. Prices for coffee are pretty much on par with any other cafes around town. Will give that a go in my next visit. 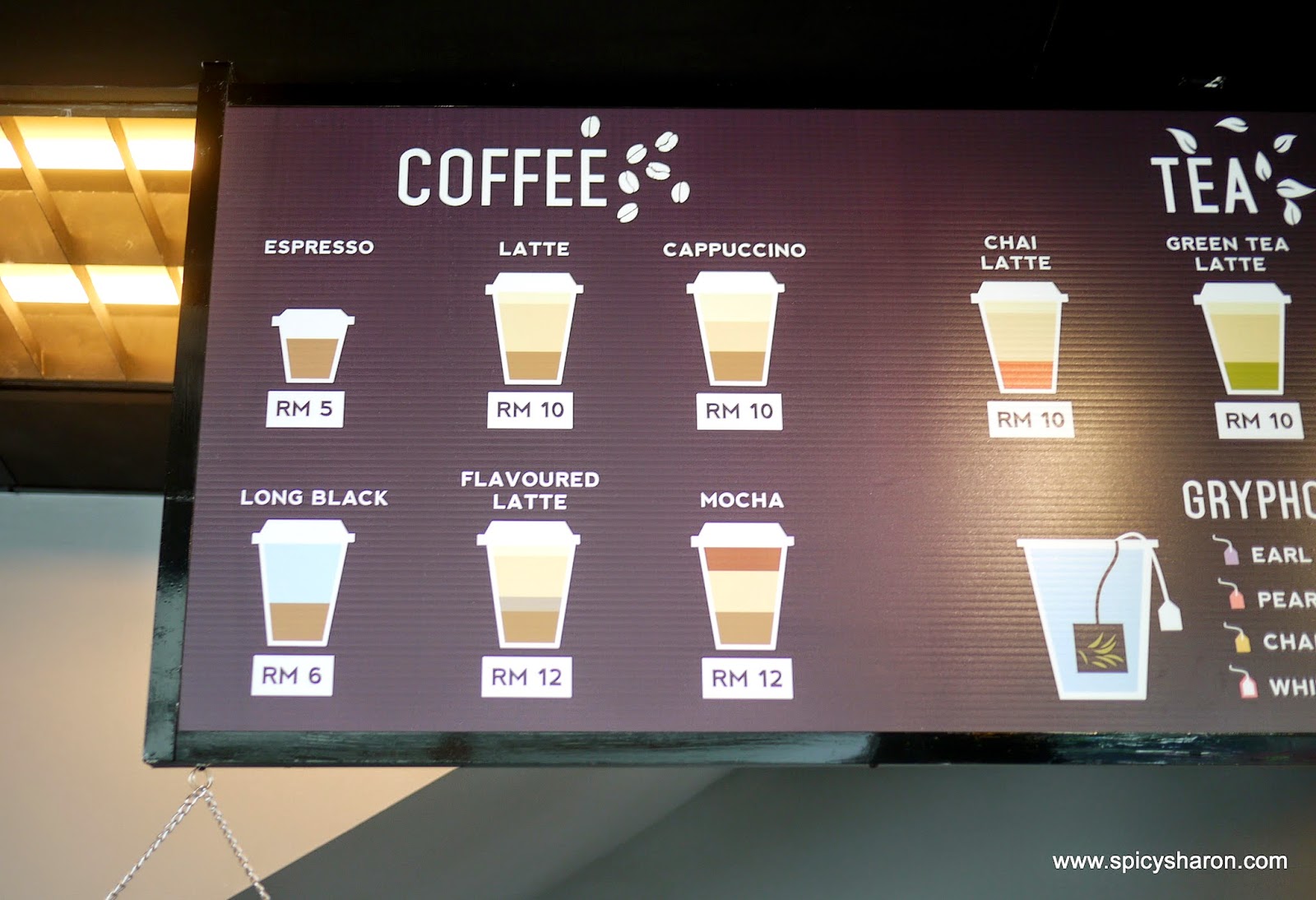 On the right, there’s the pie sets and pie toppings. 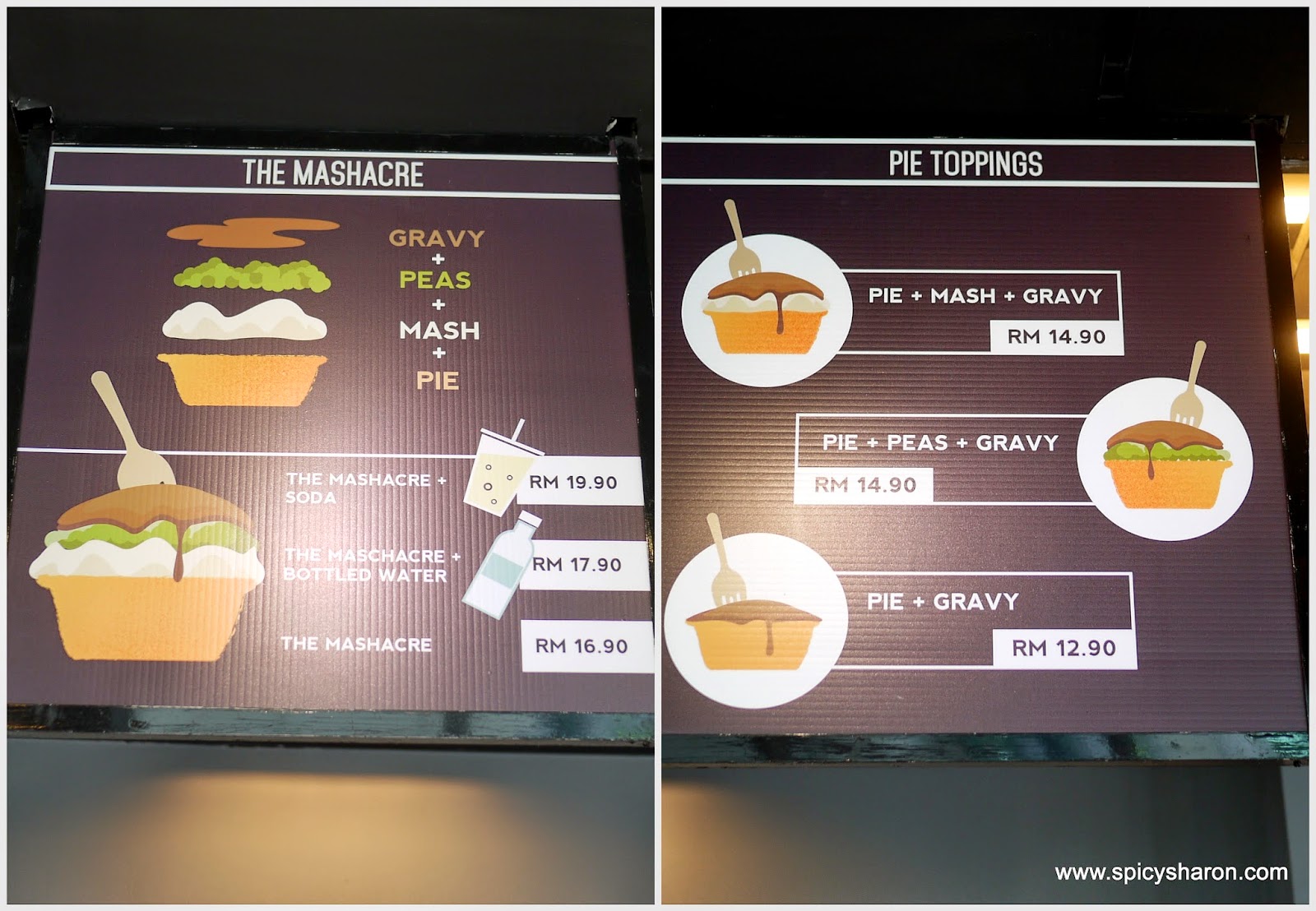 Oh I swear the pies were such a beautifully appetizing sight – glistening and golden crusted, hulking pies.
There is a selection of sweat pies and savory ones, neatly arranged and stored warm in the pie display shelve next to the counter. All pies are priced at Rm9.90 each.
There is also a shelve filled with chocolates. Didn’t take much look at that however. I was just too enthralled by the pies, I couldn’t wait to dig in. 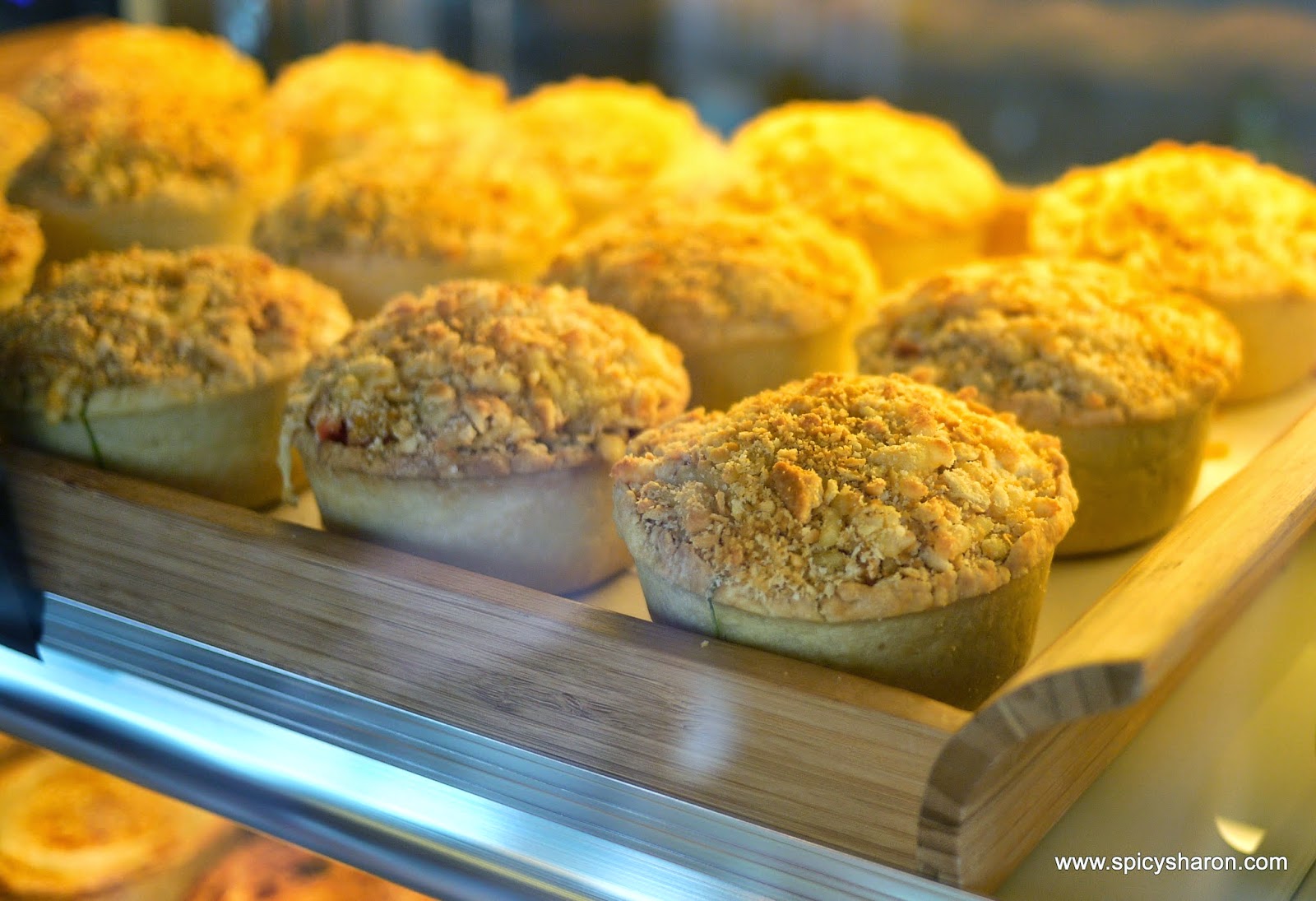 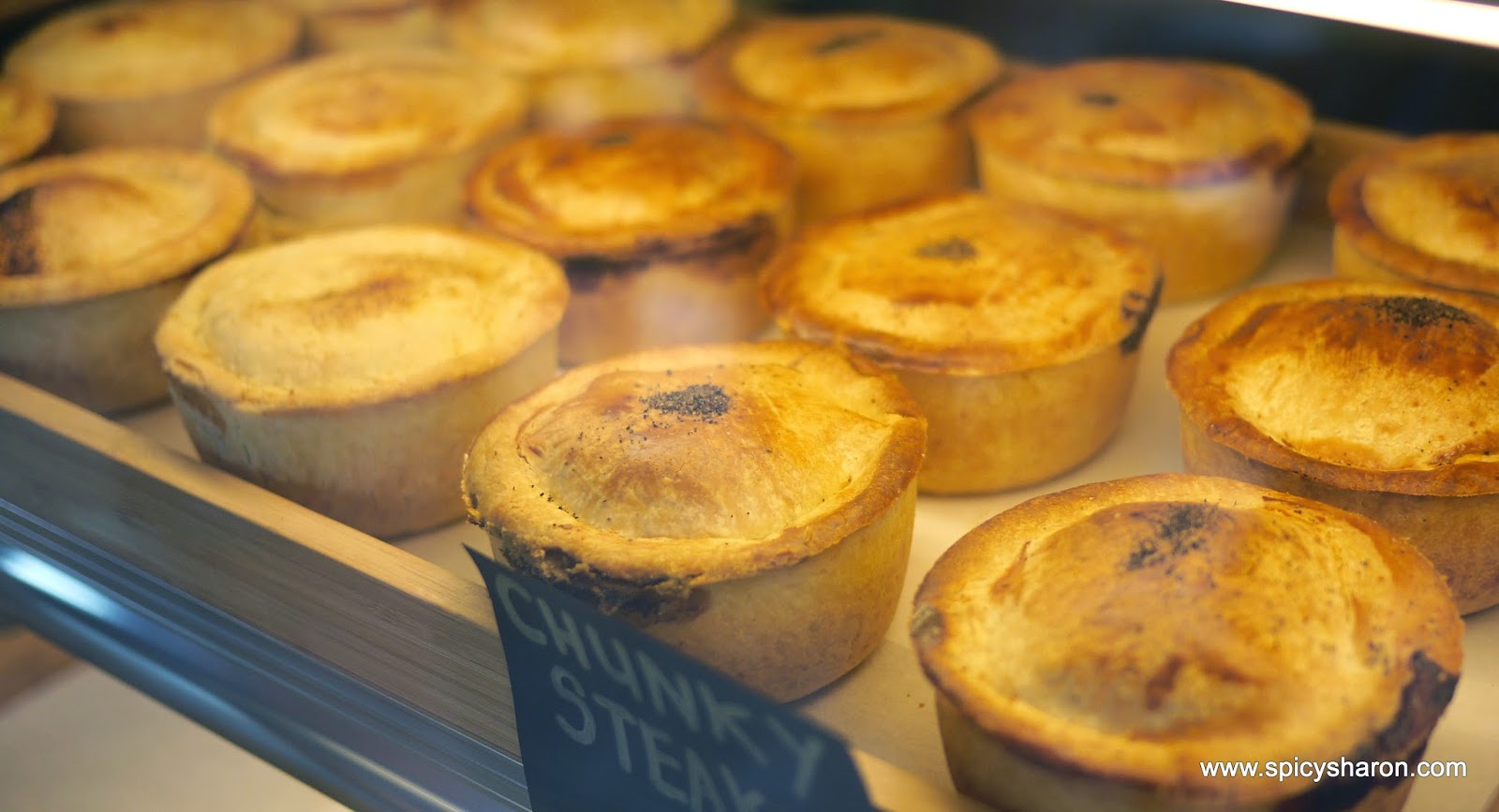 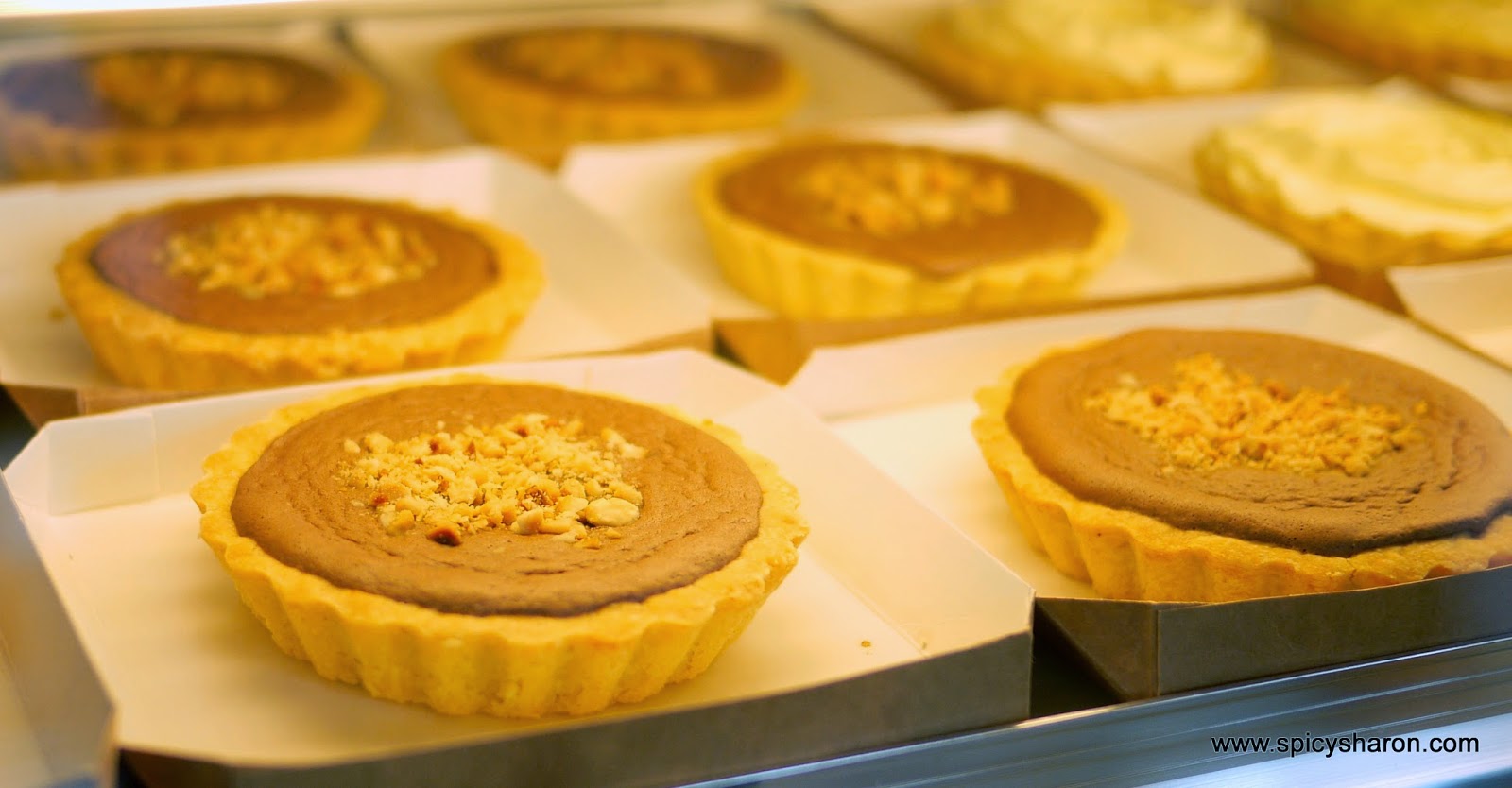 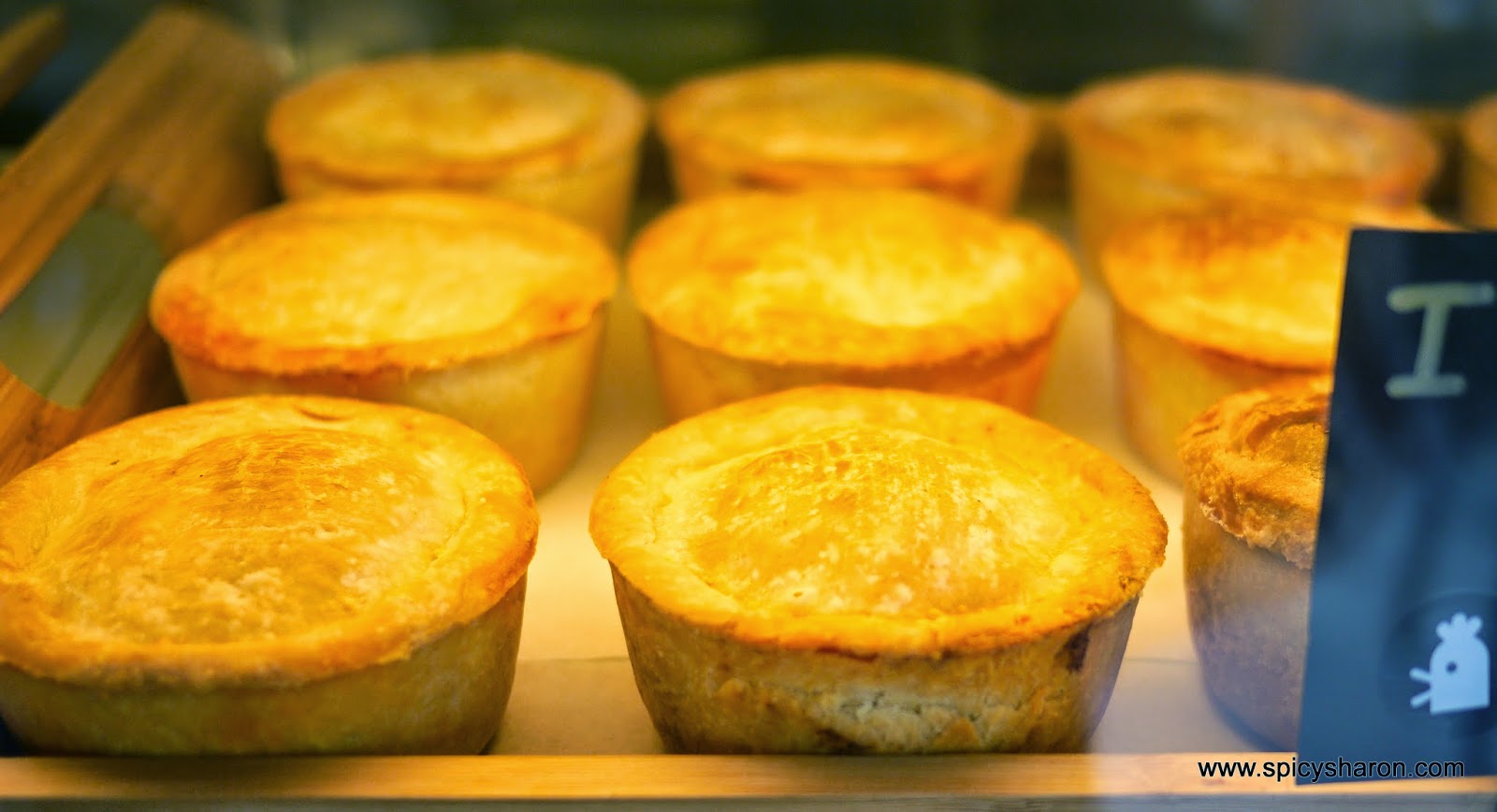 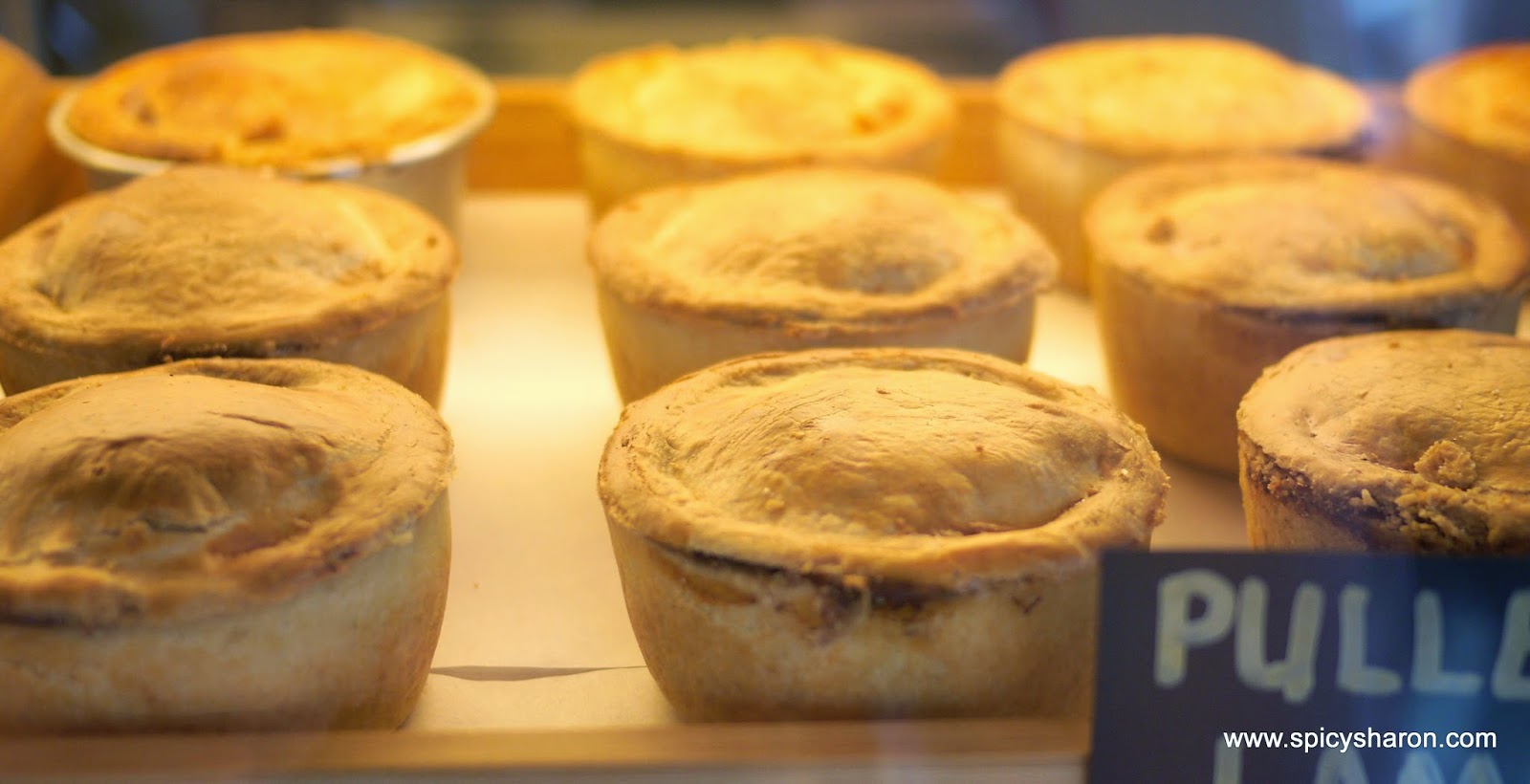 After ordering, we sat down and waited for our number to be called. It took barely 5 minutes before I collected our order from the counter. Who would have thought that pies would look so good in metal baskets? What a creative yet clever idea! 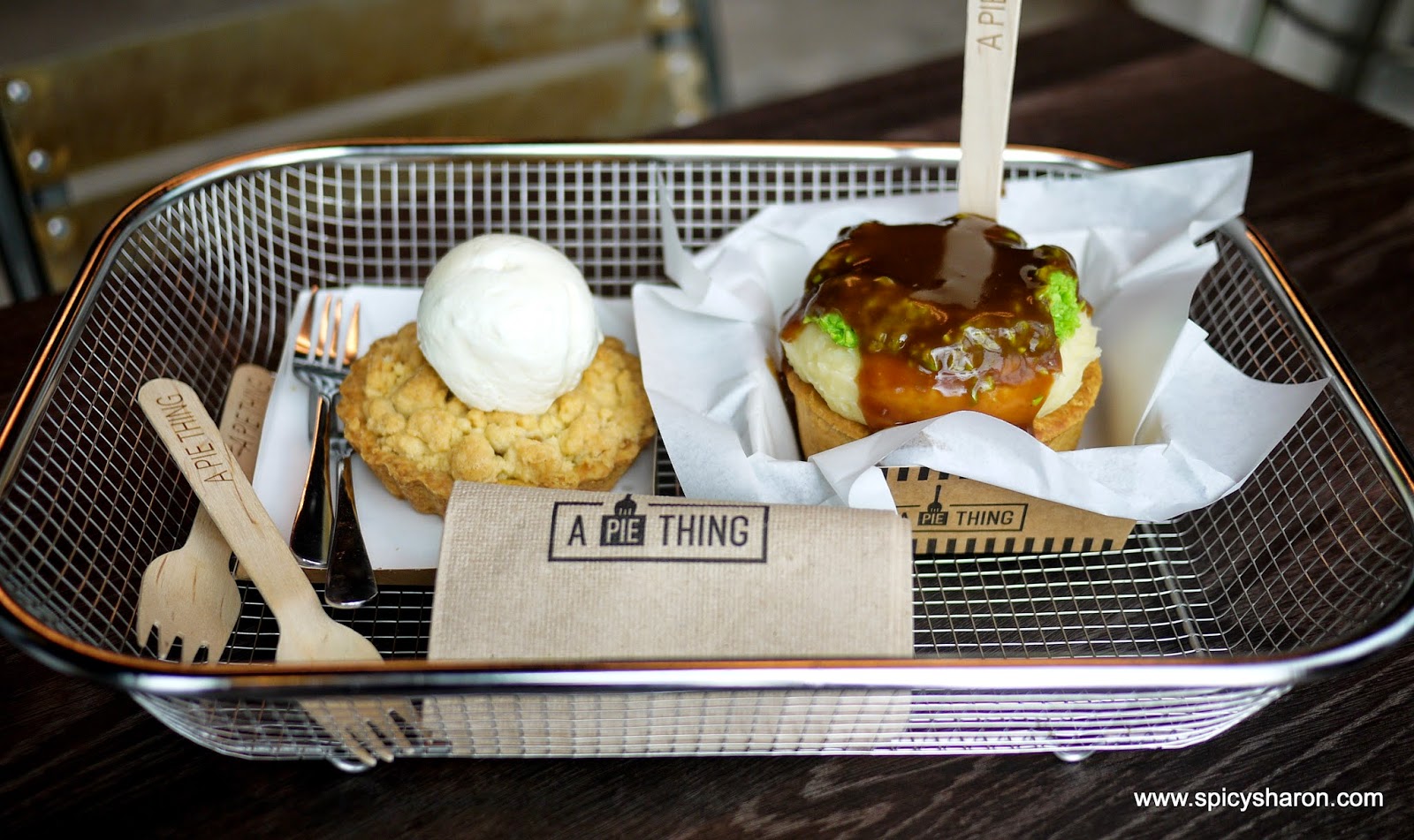 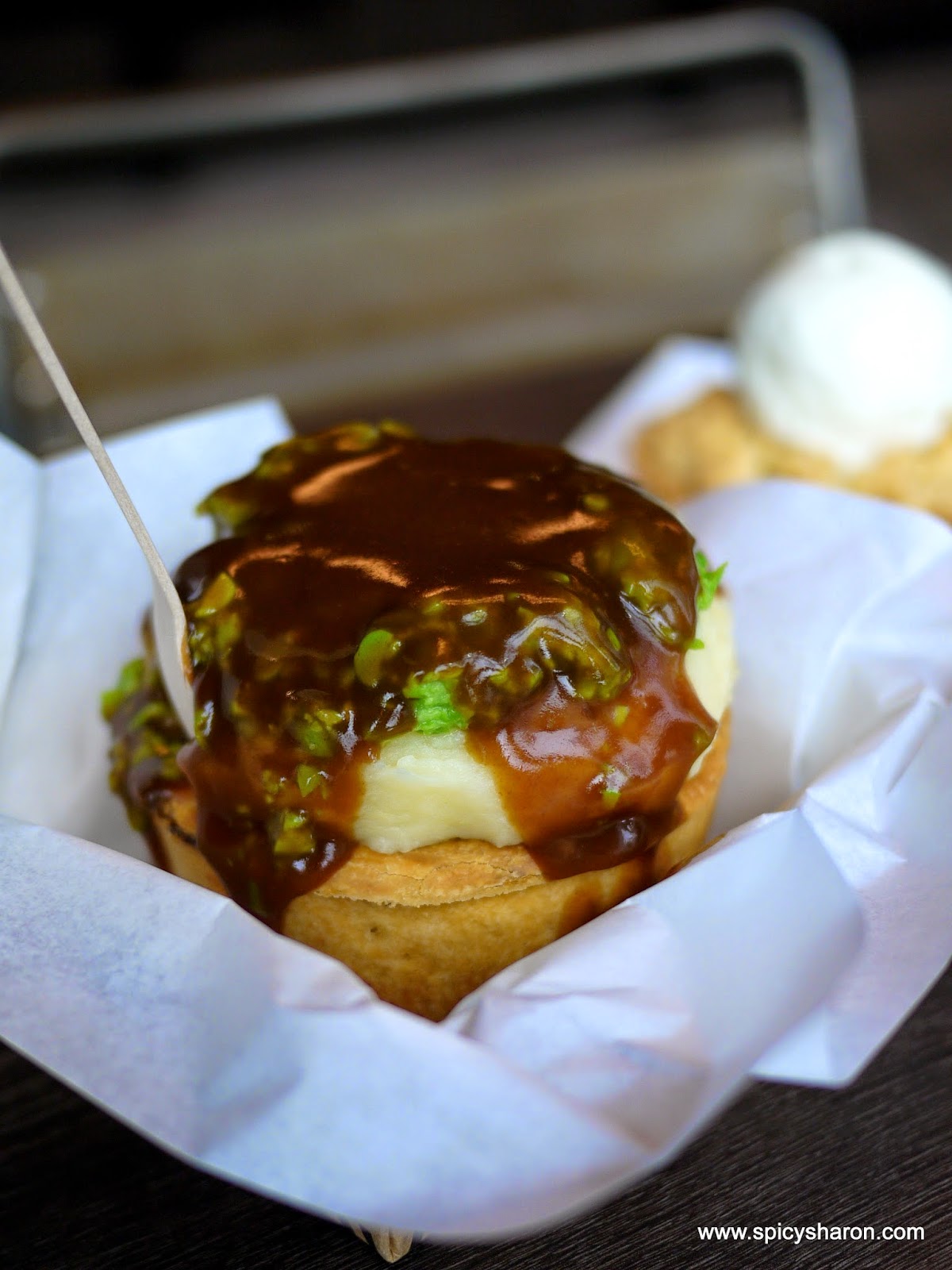 We ordered the steak pie to go with The Mashacre, which is essentially Pie + Mashed potato + Peas + Gravy.

The pie was full of chunks of tender beef, the layer of thick mash and peas was perfectly done and the gravy tasted just right. The crust base was still crisp when we reached the bottom. The mix was simplistic yet fantastic. 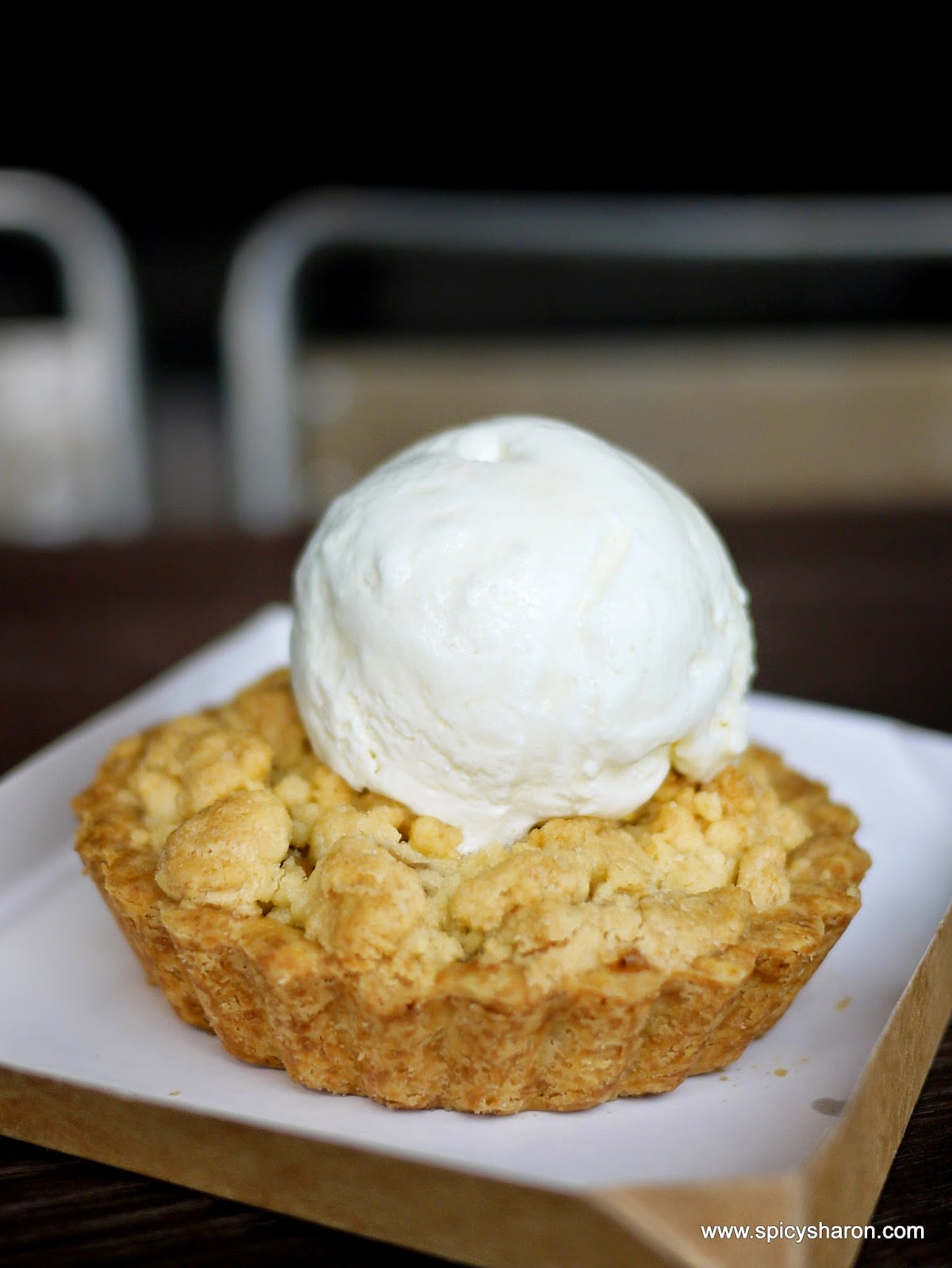 The apple crumble topped with a scoop of vanilla ice cream was equally scrumptious. The crust was crumbly and had a nice sugary texture, as expected, and the fillings were not too sweat. Though I thought it could do with a bit more stewed apple bits inside.
The whole pie affair probably took us 15 minutes maximum. By the time we were done, the place was buzzing with activity. Servers were running in and out of the kitchen, refilling multiple trays of pies at once. 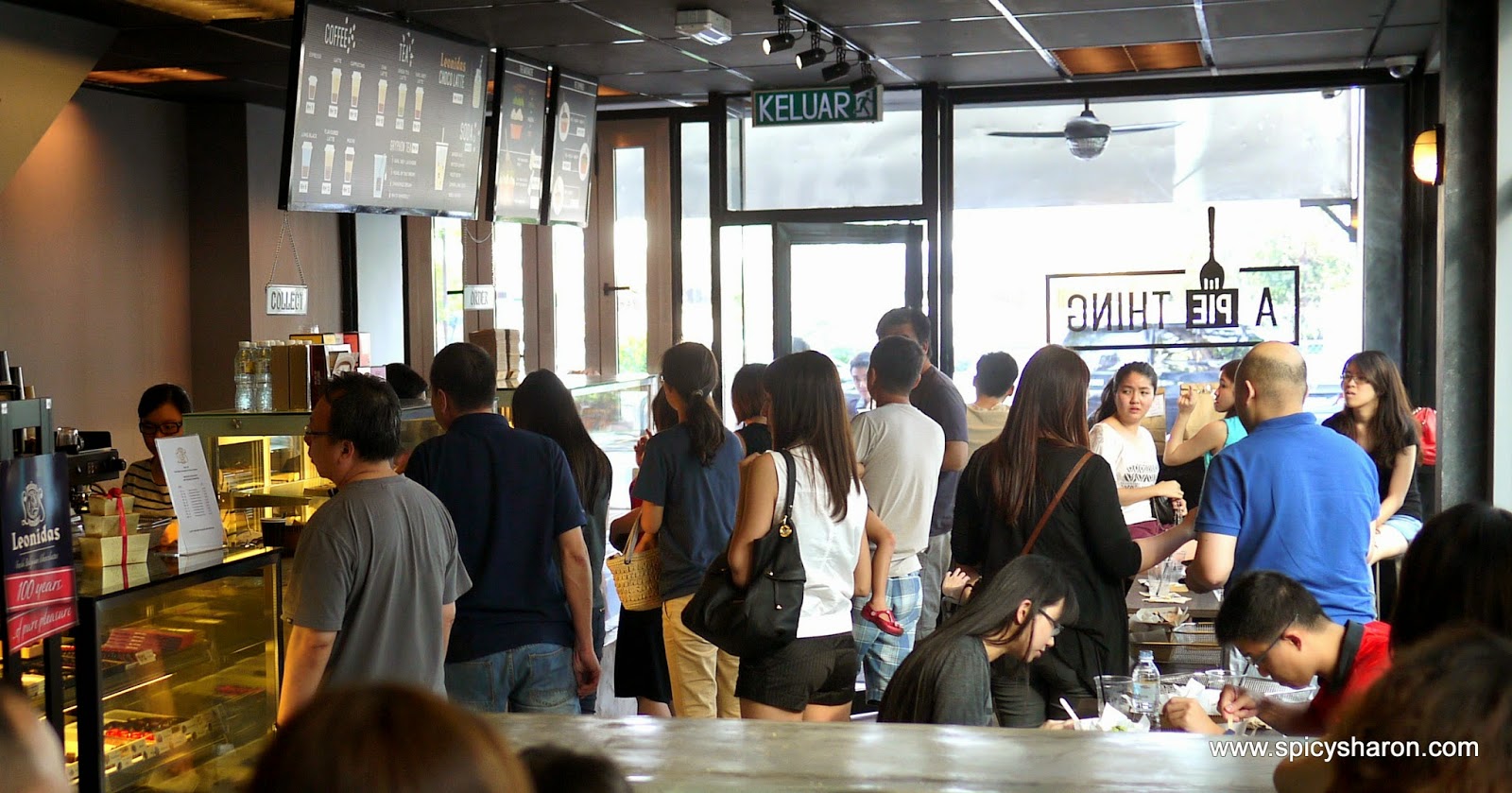 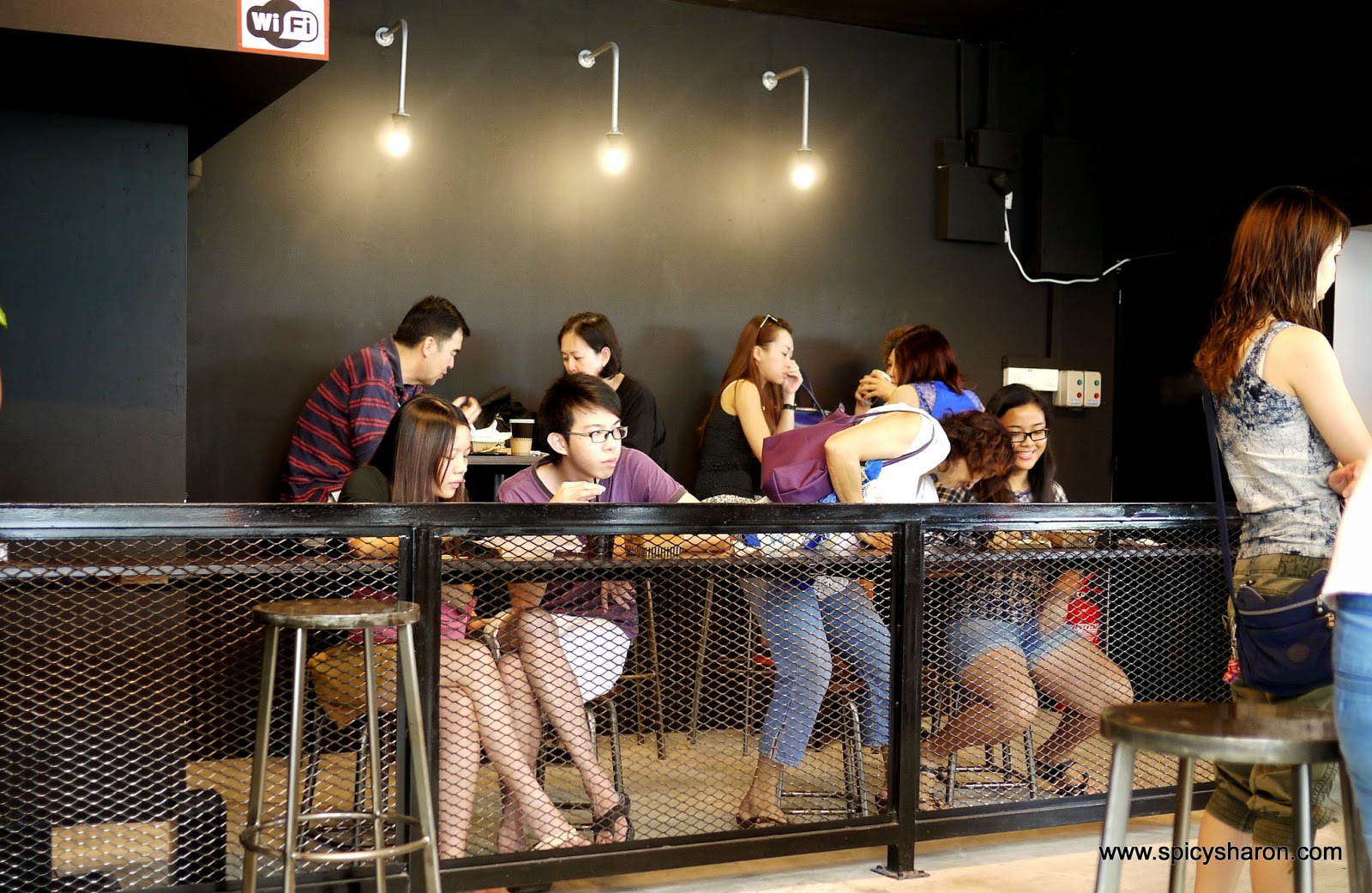 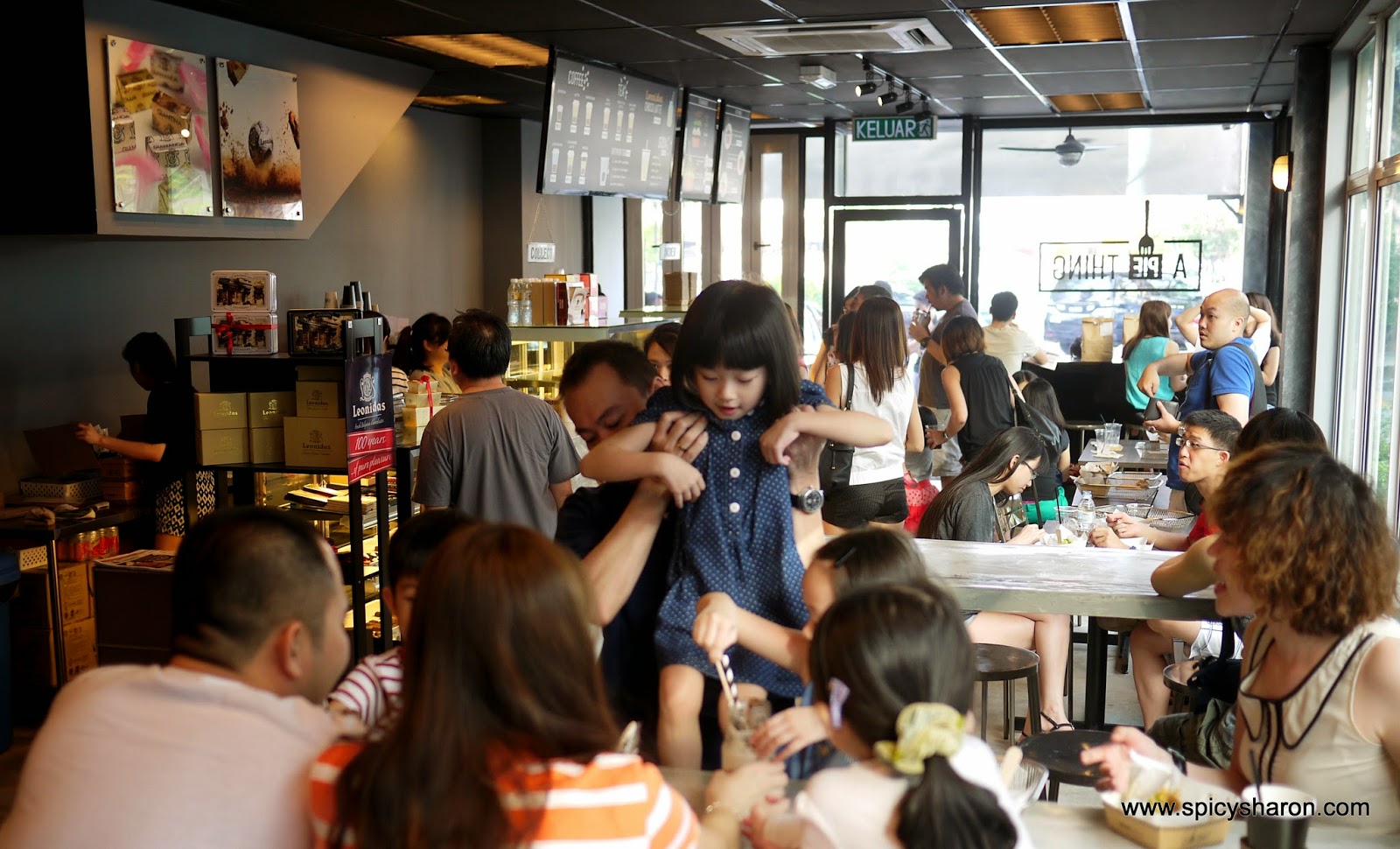 Overall Rating: 8/10. Hearty comfort food at its best. I would definitely recommend The Mashacre to go with every savory pie ordered. That said, prices does not come cheap for extra mash, peas and gravy, at Rm6 more. I thought it was worth every penny nonetheless. If all’s well goes well, I reckon A Pie Thing could definitely make it as the next best thing.
A Pie Thing is located at:
Address: 128, ss21/35 Damansara Utama Petaling Jaya