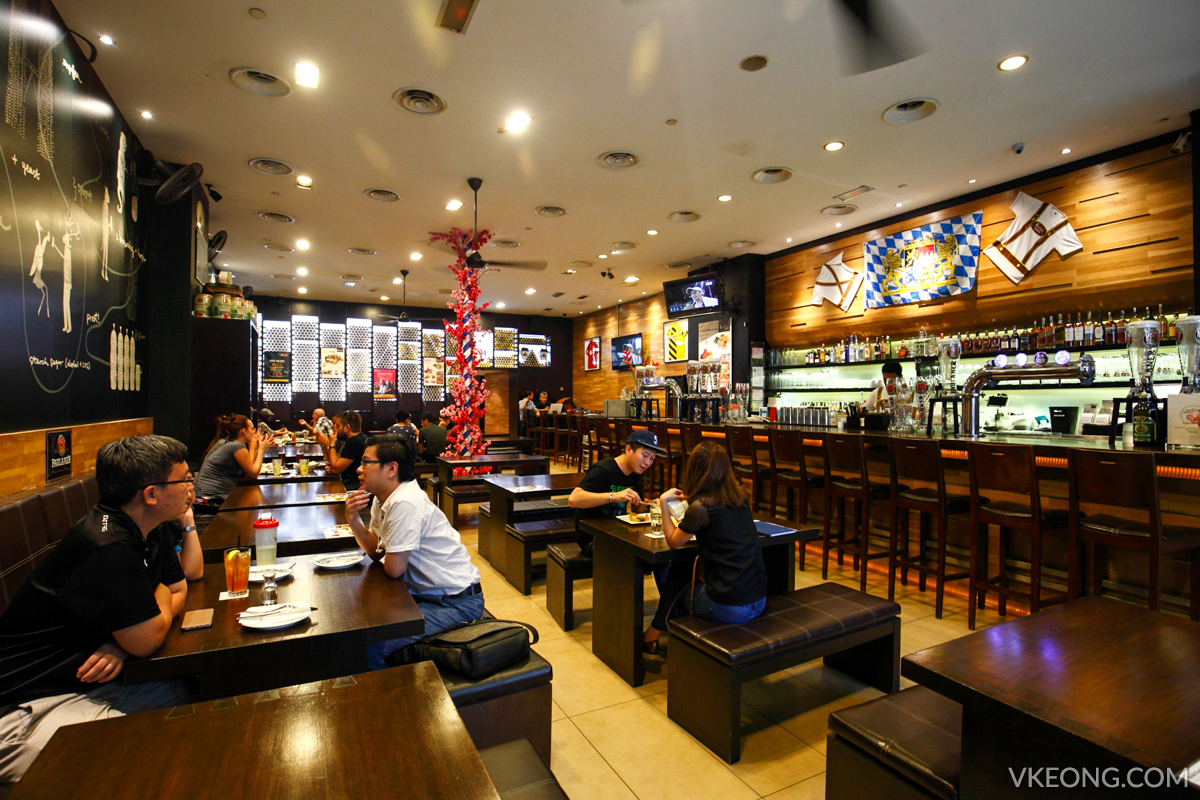 When I casually mentioned to my friends that I was going to eat at Brotzeit, here were some of the responses I got:

– “That place serves great beer and food. Nice place for dating liao.”
– “I went during their Groupon promotion, food also nice already. Worth going even without Groupon.”
– “Get the farmer’s plate, big portion and nice!”

Rarely have I received so many great feedback about a restaurant, so I knew it was going to be a good choice. As it turned out, that was precisely the case. Food was good and fresh, service was attentive and the plating was great – in fact better than what we saw on the menu.
To be honest, I don’t know enough about German food to say whether the food is authentic. The real German food we had in Berlin and Munich were mostly currywurst, pork knuckle, goulash and apple strudel anyway.
That’s where German executive chef, Helmut comes in. He works closely with the suppliers, especially butchers to ensure that the food you get at Brotzeit is as close as it can get to home for him. We already had the Farmer’s Plate and pork burger on our mind so the rest was ordered based on the chef’s recommendation.

I think I have never wolfed down a salad so happily. The Seafood Salad @ RM42 is topped with plentiful smoked salmon, seared tuna, prawns then garnished with sour cream and house dressing. It’s a colorful and appetizing salad that’s also refreshing with the addition of orange wedges. 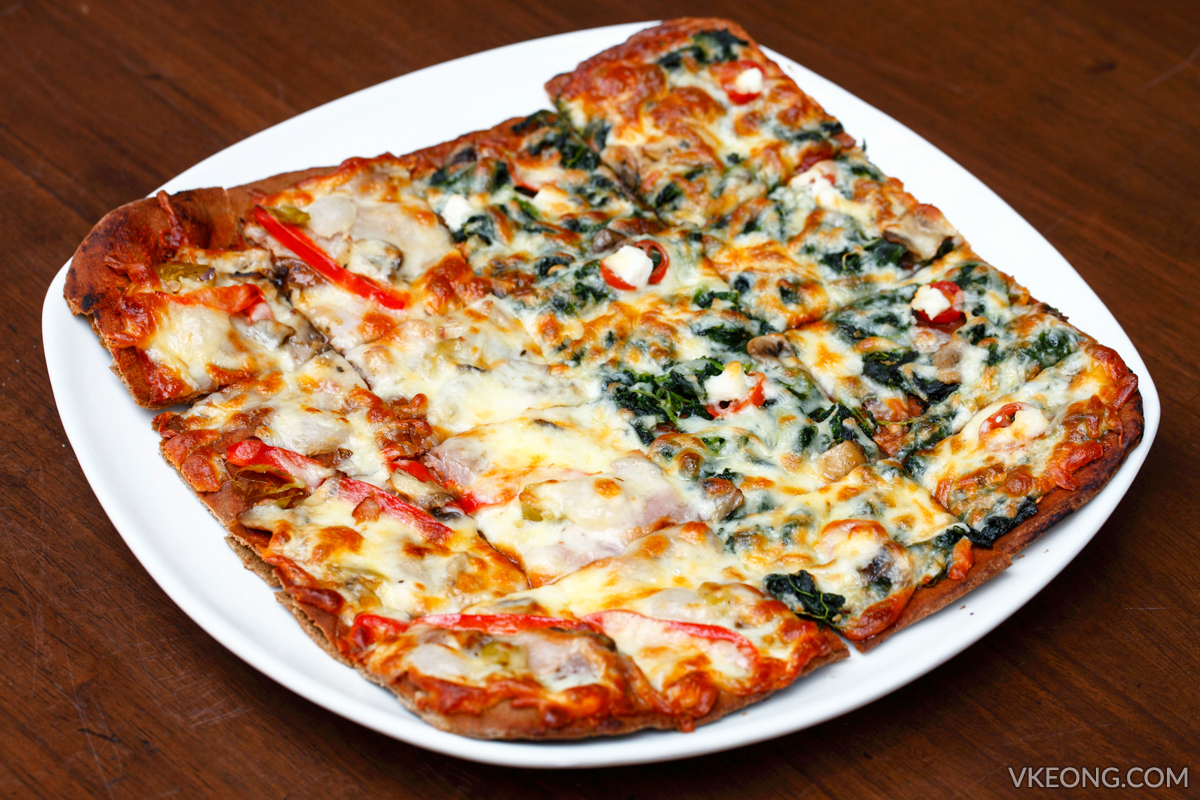 All the pizzas at Brotzeit are thin-crust with a crunchy, cookie like base – exactly the kind we like. It appears darker than usual because the pizza dough is mixed with rye flour that also gives it a distinctive taste. 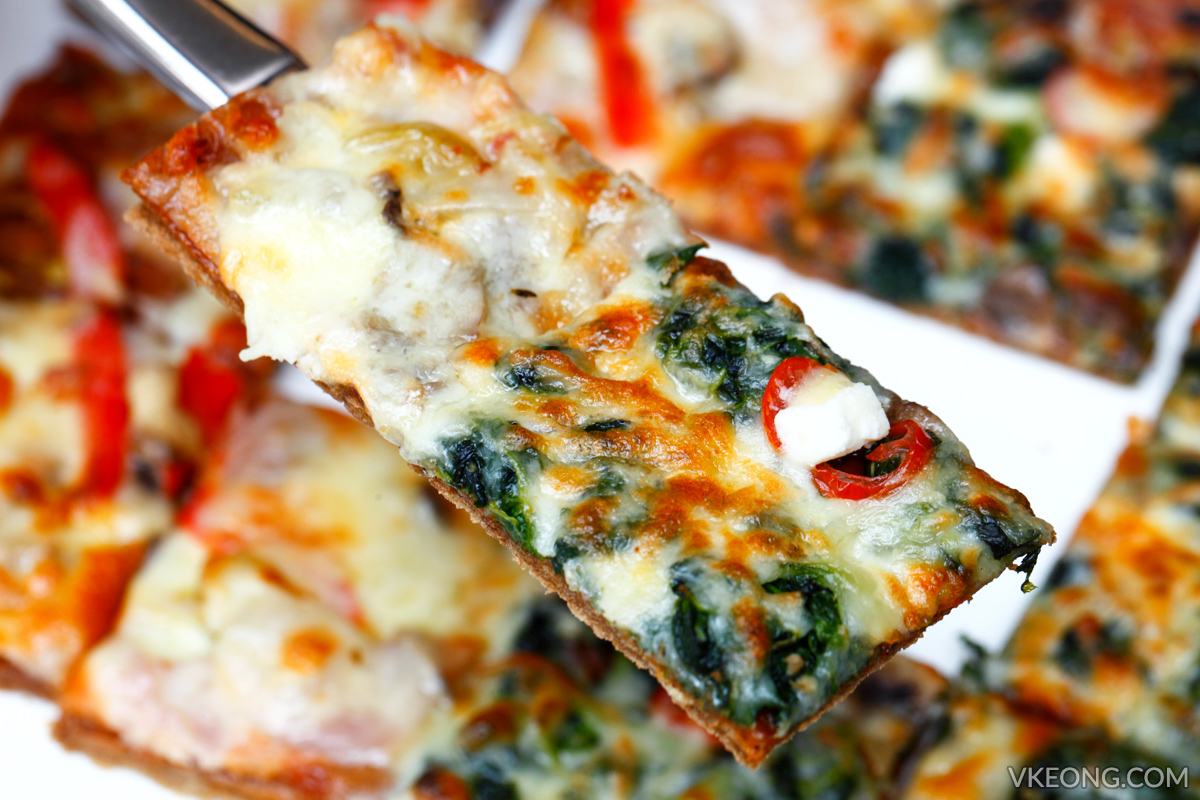 Although it’s not explicitly stated on the menu, you can actually opt for half and half pizza here. Just pick two and pay for the pie with the higher price with no surcharge.
For the sake of balancing things a bit, we picked the Spinach to pair with the Bavarian pizza. Both were cheesy and good but as always, we preferred the meatier version. 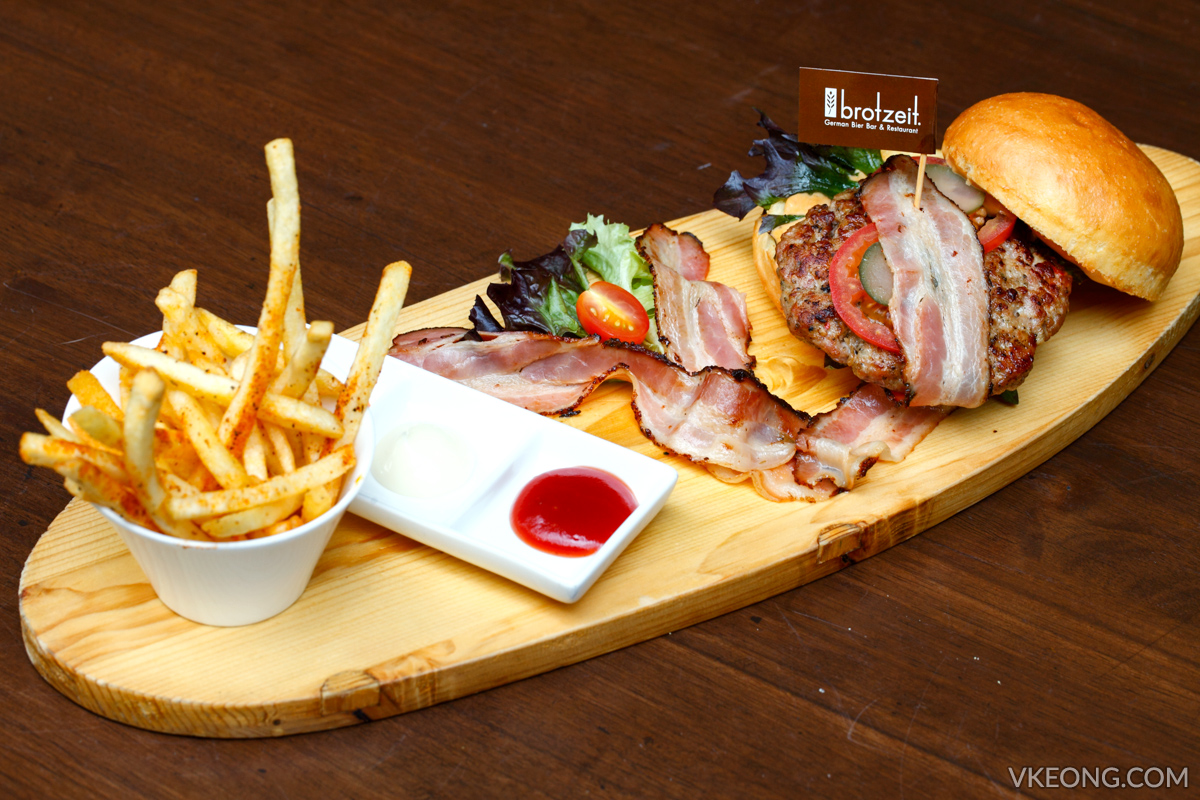 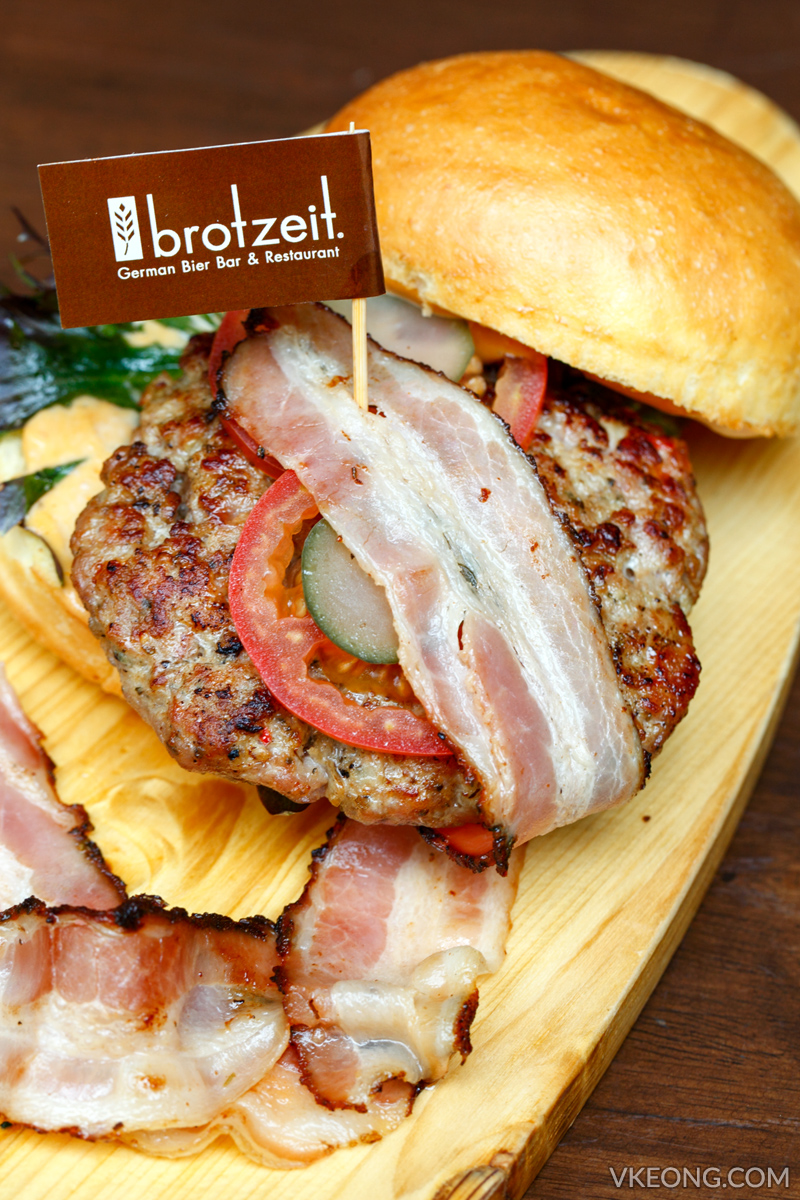 If you hanker for a big, juicy burger with the bonus of it being pork based, then you won’t go wrong with chef Helmut’s Pork & Bacon Burger @ RM38.
Except for the things that need to be grown, everything that constitutes this mouthwatering burger is homemade. Even the spiced fries were addictive. Do note that this item is only available for dinner for 6pm onwards yeah. 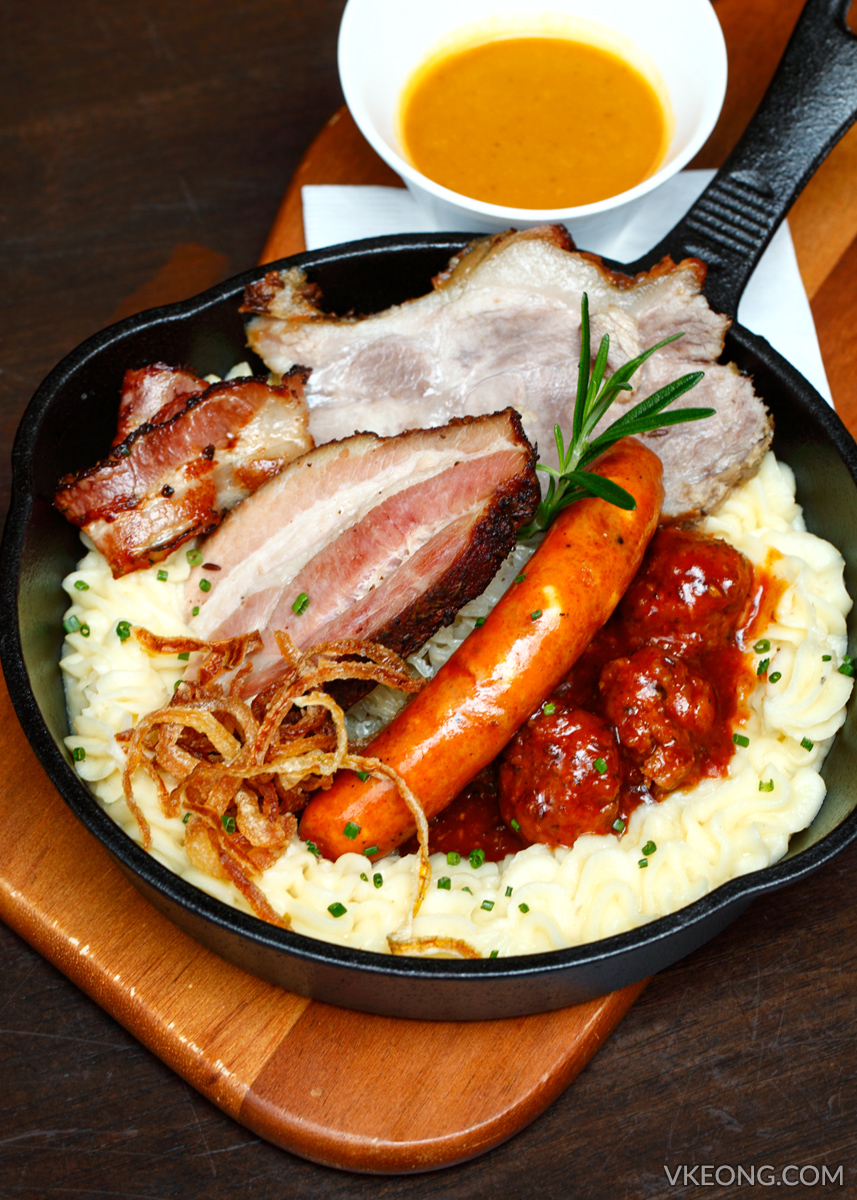 Here’s the Farmer’s Plate (RM46) we set out to try and it didn’t disappoint. It’s basically a medley of pork belly, bacon, meatballs (in honey rib sauce), pork cheese sausage on a bed of sauerkraut in a ring of mashed potatoes.
While the portion is intended for 1 pax, the huge serving allows for sharing among a group. You get to try a bit of everything and my favorites were the chunky pork cheese sausage and the excellently made mashed potatoes which, for me, was perfect in every way. 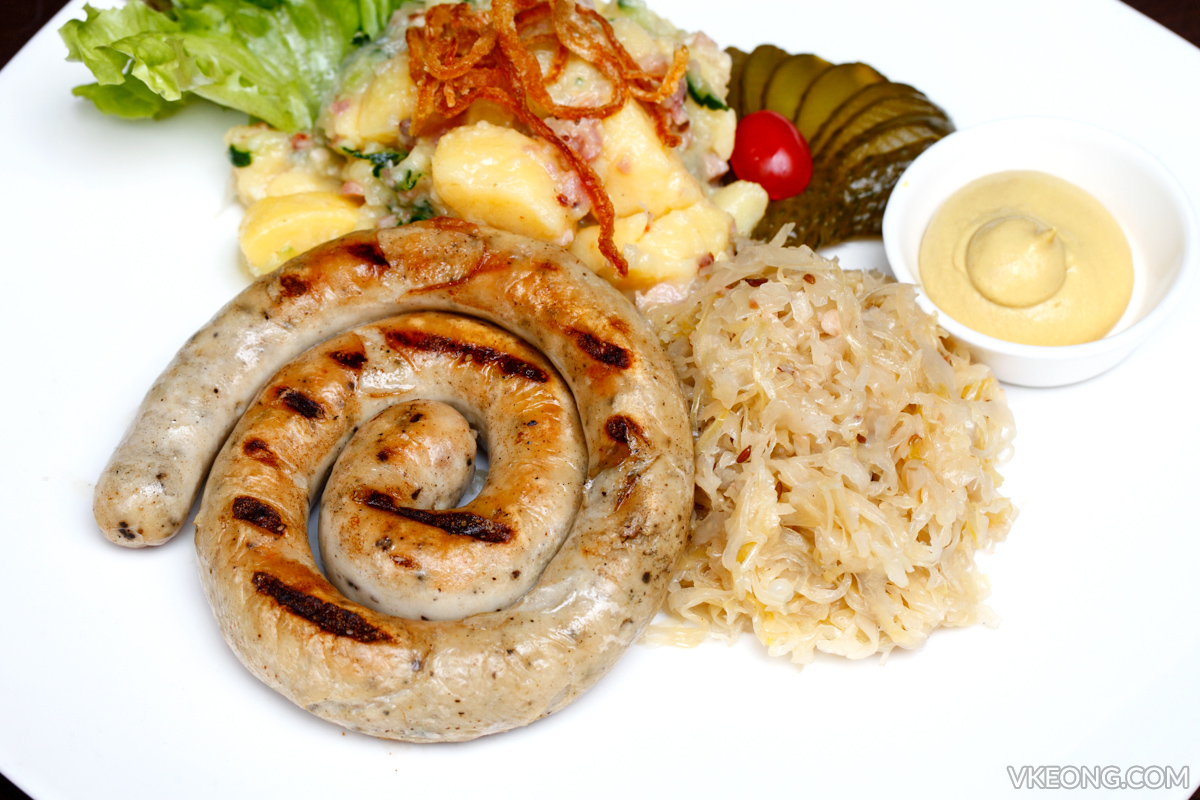 Unless there’s another German chef from Thuringia working in KL – chef Helmut’s Coiled Thuringian Bratwurst (RM43) is the only one you can get your hands on. Compared to the cheese sausage earlier, the Thuringian bratwurst had a finer grind so you will taste more flavor from the fat. It also has that desired charring that distinguishes itself from the rest. As per the Thuringian tradition, mustard is used as the dip. 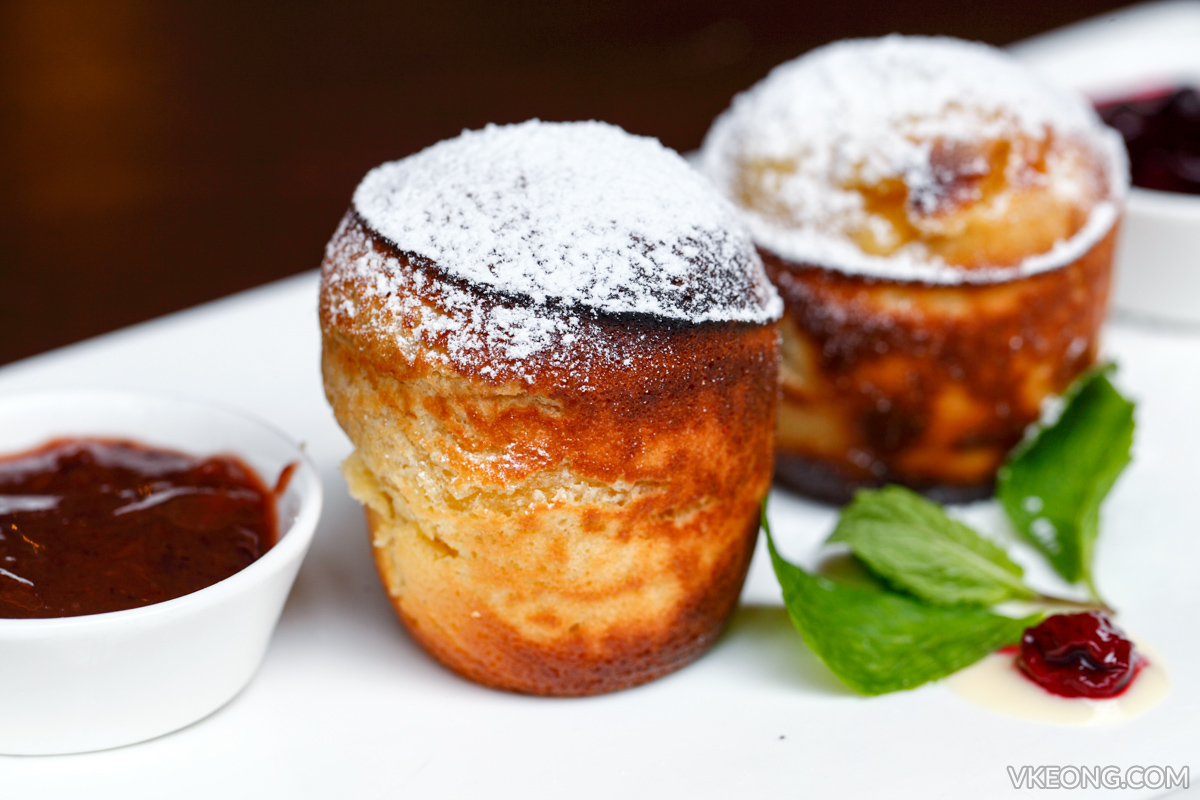 Dessert wise you have plenty to choose from and they are not the run of the mill items too. We were torn between the apple strudel and the chocolate lava cake (RM25) but we decided to have the latter, mainly because it was uniquely prepared with white chocolate instead. 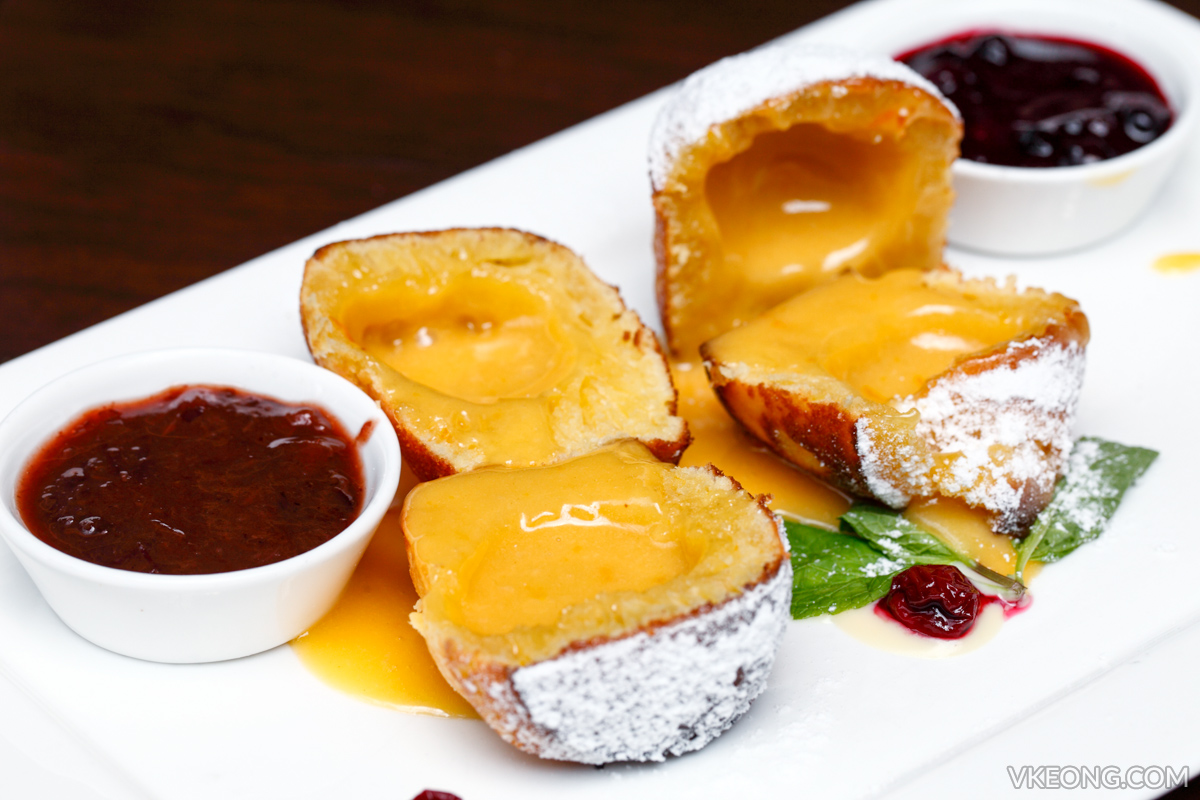 We were pleasantly surprised that it did not taste like the normal chocolate lava cake. Of course, there’s still a liquid chocolate center, except that it’s infused with orange juice and zest. The cake, on the other hand, had a crispy shell with a dense, moist and spongy texture inside.
Plum and bluberry sauce are provided for extra tartness and sweetness – not like it’s necessary since the cake is already delicious on its own, but nevertheless recommended. 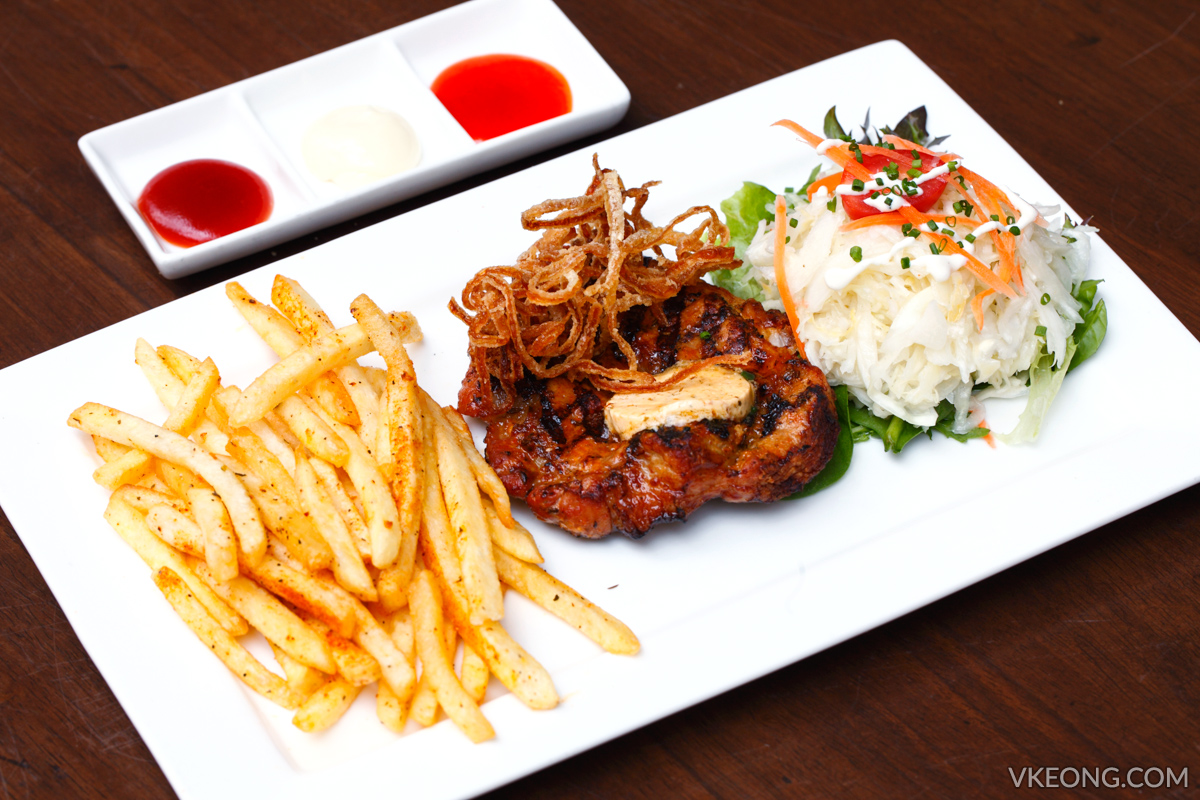 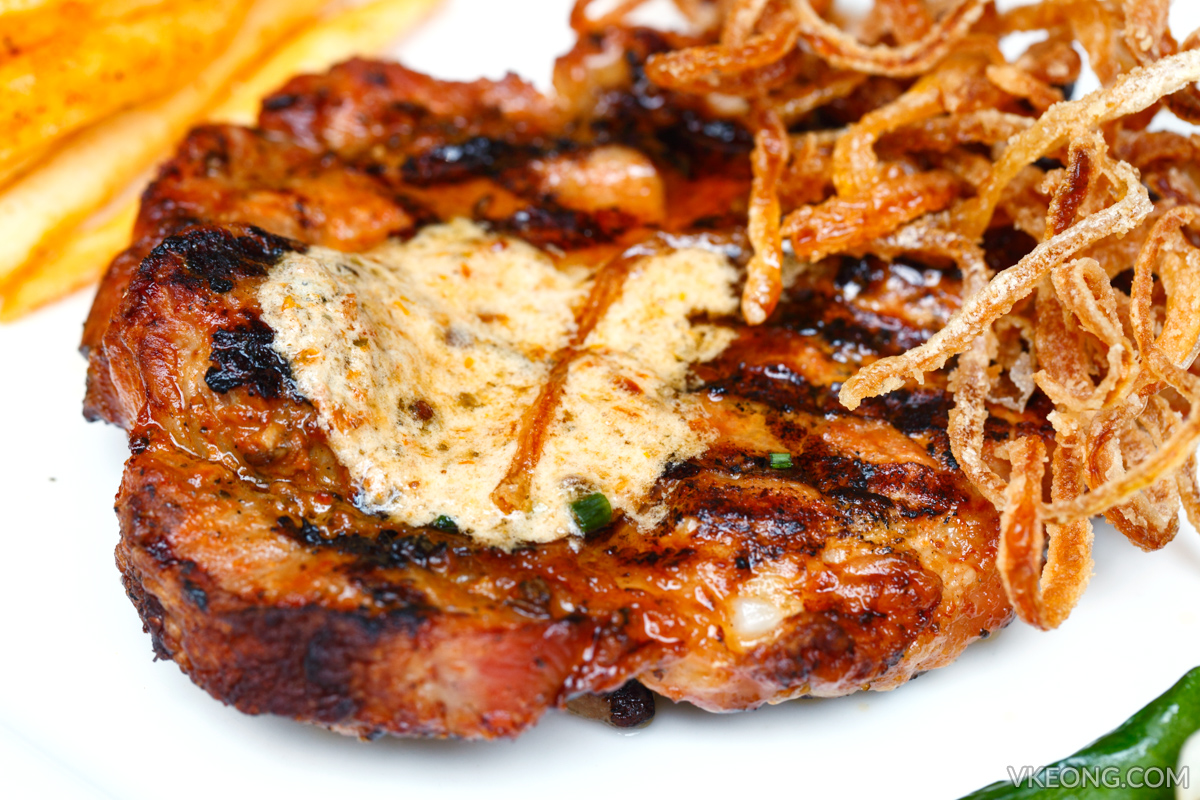 Brotzeit’s lunch specials are also worth mentioning. For RM20 or so, you get a main course with free ice lemon tea and the serving size is more than adequate considering most of them also include sides. If you add on a salad or soup, it even comes with a complimentary dessert. Talk about value.
The Lumberjack Steak @ RM20 features a fillet of pork neck that’s marinated in German spices for a day, then grilled and baked to tender succulence. Another version of this dish is also available in the dinner specials menu, but with double the meat and extra honey glaze. 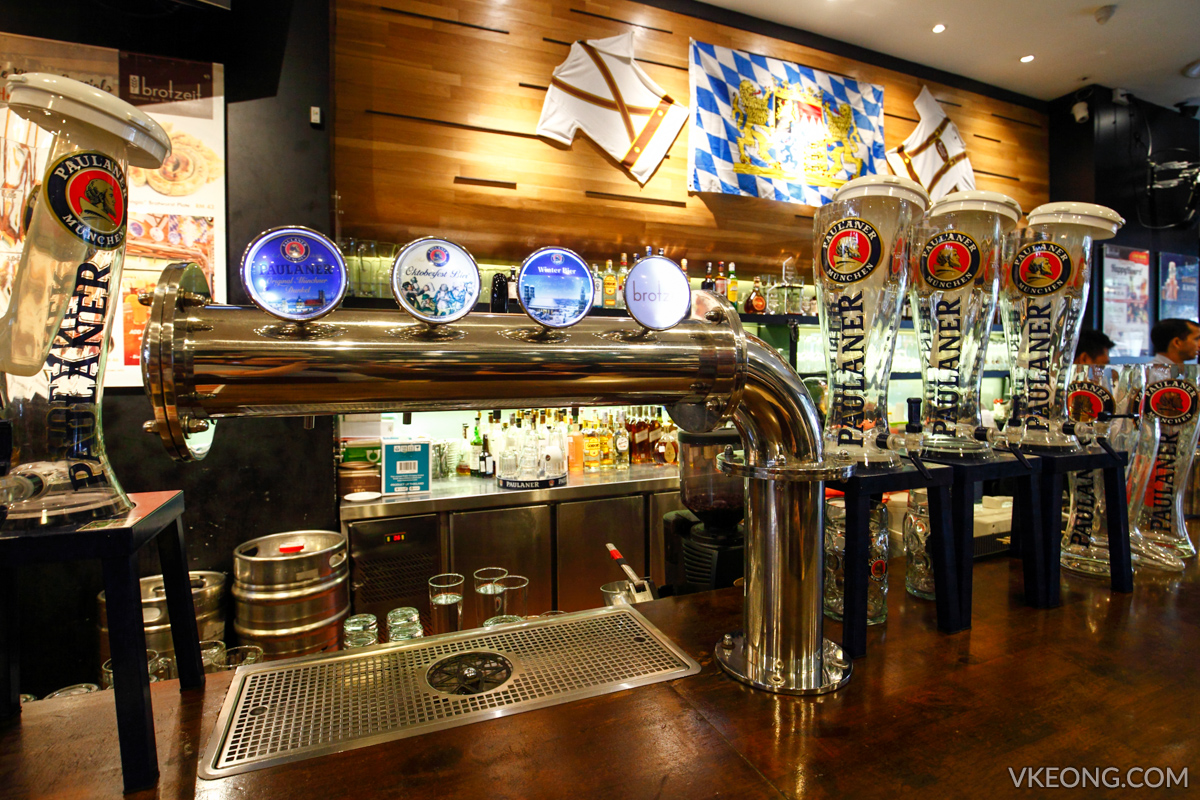 Don’t forget to check out the selection of draft Biers while you are here. Octoberfest is celebrated at Brotzeit annually and they carry a wide range of beers, mostly by Paulaner. 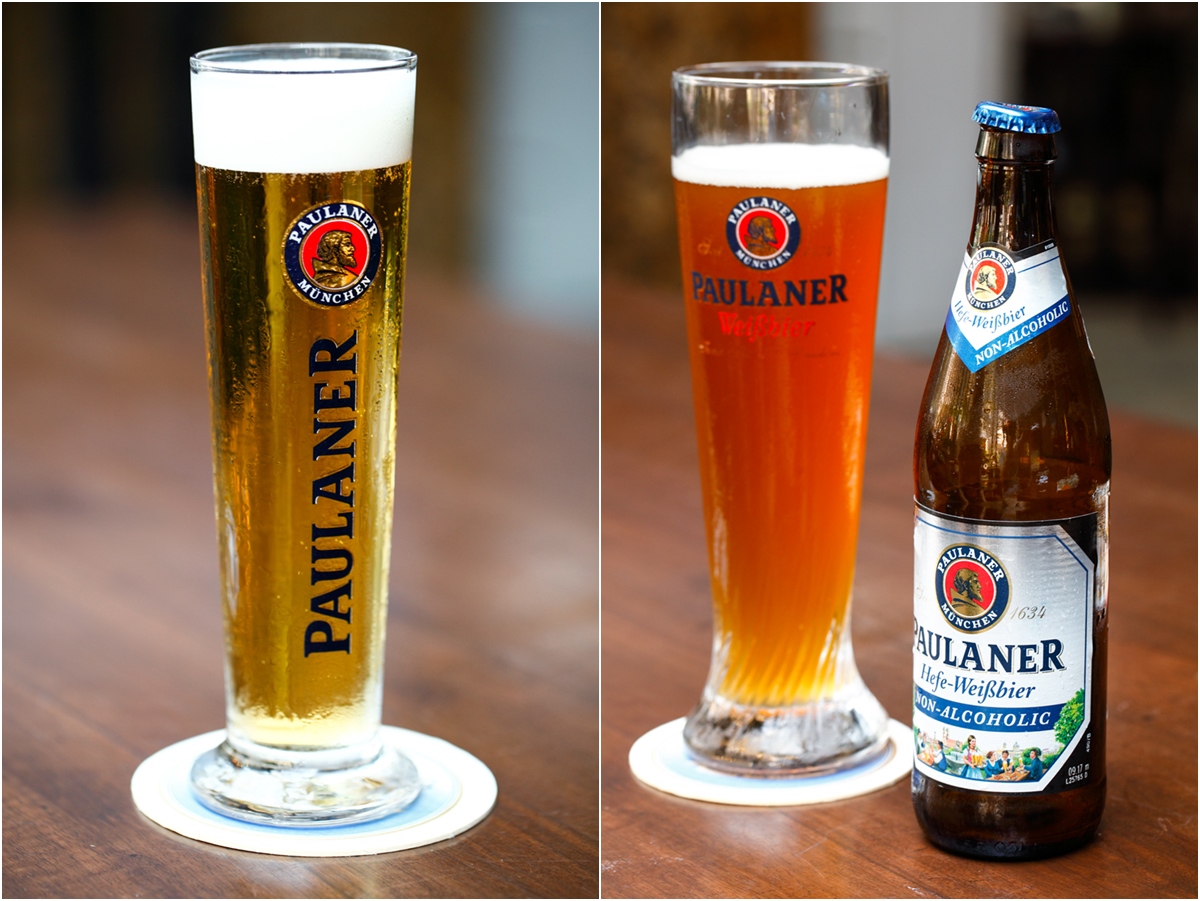 The Paulaner Hefe-Weissbier Alkoholfrei is probably the more authentic non-alcoholic beer we have had so far. Great when you want to stay sober, and more importantly when you’re not driving. Otherwise, perhaps it’s a better idea to stick to the real thing. 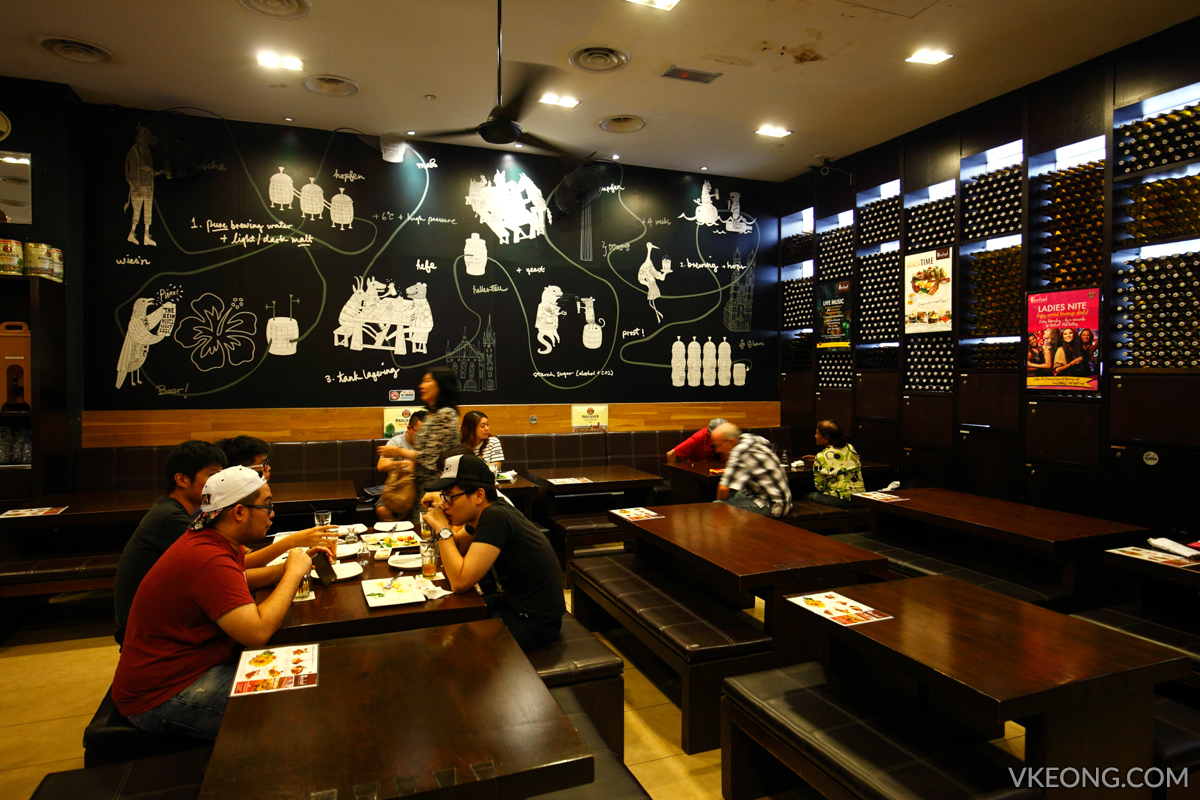 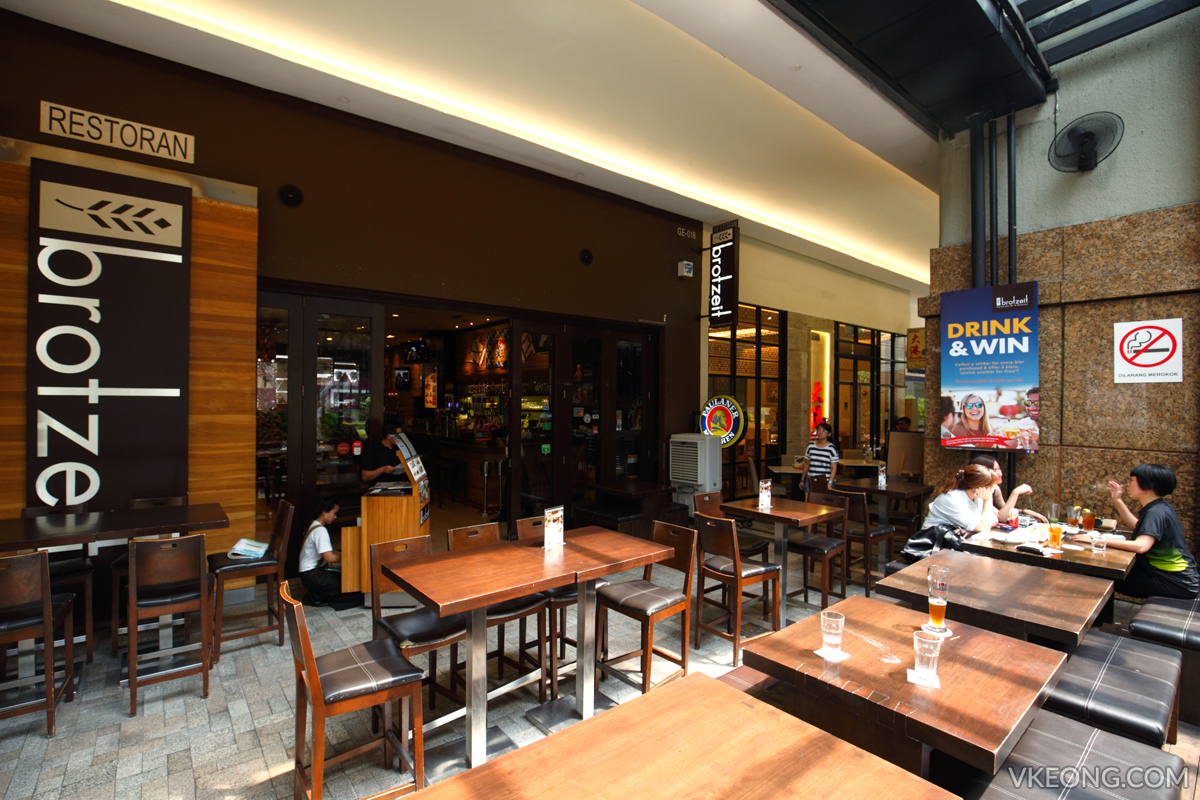