Oyster Festival Kuala Lumpur 2015
Words by Huong Tran Photos by Monica Tindal (Yum List)
When you mention oysters, the running joke always is “ha-ha it’s an aphrodisiac,” but to an oyster fanatic, “it’s like kissing the sea.” Many French poets have so beautifully described the taste and experience that I feel it’s my duty as a foodie to find out more.
I have always liked oysters, and on those few occasions in the year when I’m lucky enough devour them, I find their silkiness and freshness perfect for our local KL weather. However, I am no oyster connoisseur or adept at distinguishing between a wild or native oyster let alone origin and taste, but luckily for me, the invitation from Monica to the 2015’s Oyster Festival has opened up doors to a greater and wider appreciation and understanding of oysters.
This year marks the first ever Malaysian Oyster Festival (25th October until 01 November) – organized and hosted by Southern Rock Seafood and its adjoining kitchen restaurant – a family run specialist fishmonger that has been consistently supplying premium oysters to KL’s top restaurants, hotels and loyal retail customers for the past six years.
Southern Rock Seafood
I was fortunate to pick the brain of Melvin, the ops manager and Josh, one of the directors and founders – both die-hard oyster enthusiasts. They were full of answers to my questions, but had also prepared an educational tasting guide was very useful for reference. Just like white wine, there are characteristics with a number scale system to measure flavour, saltiness, sweetness and umami. How funny, “umami” is a Japanese word measuring the essence of deliciousness! 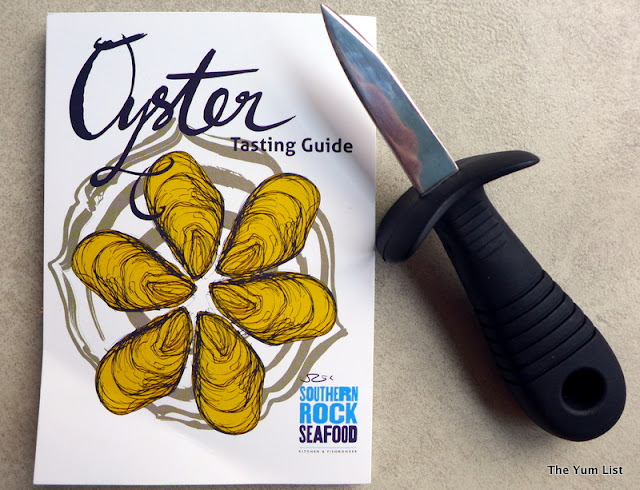 Oyster Tasting Guide
October was a great month to hold the festival, as it is the in-between month where you can enjoy both the northern (English, Irish, Scotland, Dutch, and French) and southern hemisphere oysters (Australian / NZ). So lucky for me – a whole plate full of 12 varieties! 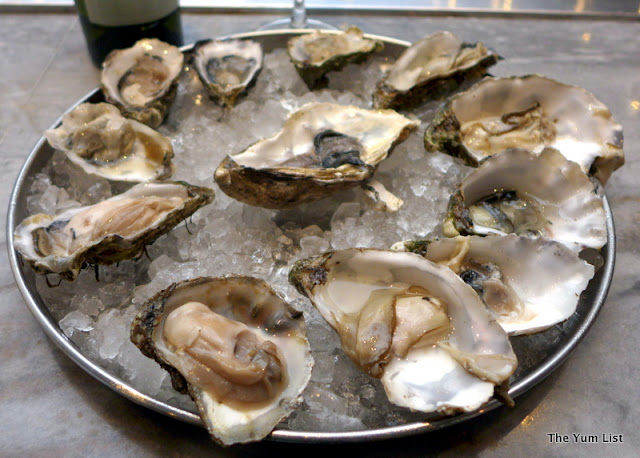 Twelve Oyster Varieties
And this is perhaps the easiest way to taste and differentiate the many varieties – line them up in one go and eat them “naked.” That’s a term when you don’t put any toppings on your oyster – to really appreciate the honest flavour. Like wine or cheese, it’s really a personal preference. Yes, you certainly 100% can taste and feel the difference. Besides from the shell looking different or being different in size, it’s like perfume – each oyster variety has its own smell and very distinct taste and juice. That’s why the prices range too: from RM80 to RM168 for a dozen with the Irish oysters being the most expensive.
My favorite oyster is the Irish Tagheanna Bay Oyster. It’s simply velvety, creamy, and very umami – my new word for “very delicious”. Paired with a chilled Strongbow cider, it’s a wonderful match. 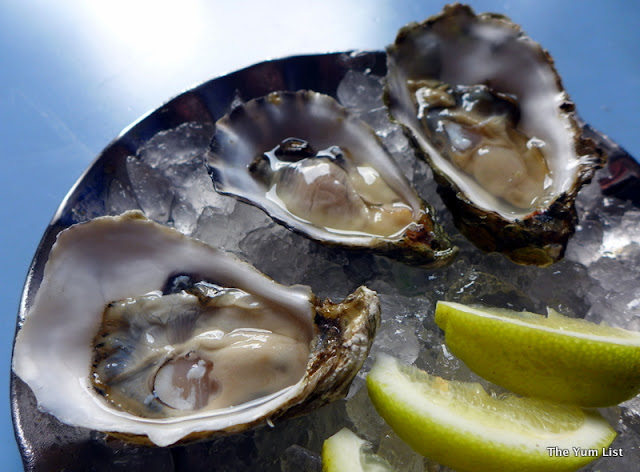 Close Up on the Oysters
So in a two hour tasting session I’ve learnt an abundance of new facts. I can say it’s a little briny (aka salty), or try to describe the smell as sea-weedy or sandy shores. Then of course there’s the body and texture of the oyster (eg plump, firm, woody) and its finish and after taste. Never will I take an oyster for granted again!
To end the afternoon a friendly shuck-off competition was held where contestants shuck (oyster term to open the shell and detach the meat) 12 oysters and present it back on the iced plate in a pretty manner. The winner is based on fastest time and also quality of shuck. What skill precision and speed these shucklers work at! I am impressed and thankful that I order my oysters opened and ready to slurp. 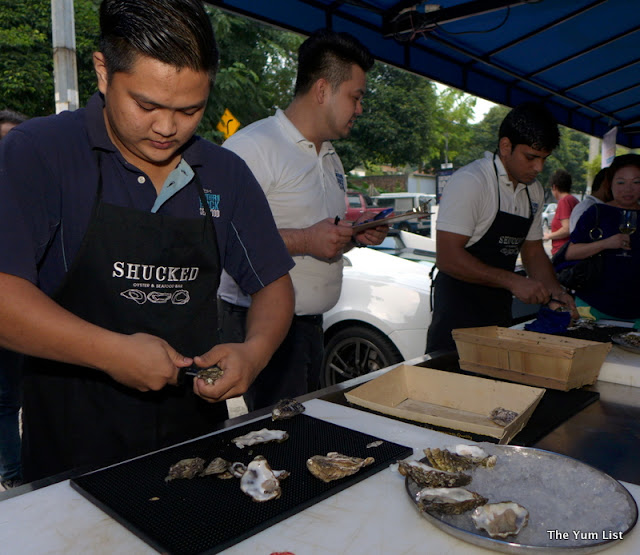 The Great Shuck Off!
But if you missed the Festival, it’s ok because drum rolls… This is just the soft launch for the big event which is to happen next April for the 2016 Malaysian Oyster Championship – so bookmark your calendars to watch some serious shuck-off and prepare for next year’s oyster tasting extravaganza.
Today is the last day of this year’s oyster festival so head on over to one of the Shucked Oyster Bars or to Southern Rock Seafood to get your taste of the sea.
Reasons to visit: perhaps the widest selection of oysters in the city, a chance to sample 12 different types of oysters and a handy guide to take you through the tasting of each one, and remember to bookmark April 2016 for the Grand Oyster Festival.
Southern Rock Seafood34 Jalan Kemuja59000 BangsarKuala LumpurMalaysia+6 03 2856 2016www.southernrockseafood.com