By Manveen Maan
A long sliver of a country in southwestern South America, Chile’s striking, diverse geography has resulted in it being a powerhouse producer of a vast variety of fresh food and wines. Chilean wine has slowly (and rightfully) gained a reputation around the world as the preferred tipple of many a vino lover, while its booming agricultural industry sees the fruits of its labour (no pun intended) bringing in much profit.
Fish vendor at Mercado CentralUnknown to most, Chile is a leading exporter of seafood and fresh fruit, with exports to Malaysia sitting at a whopping 227 billion USD, out of which about a fifth is food and wine. Chile is the Southern Hemisphere’s largest exporter of fresh and dried fruit (and the world’s No.1 exporter of table grapes, plums, blueberries, apples and peaches), while its seafood (Chile is the world’s second largest producer of salmon) and shellfish find their way into many homes across the globe. An impressive feat for such a small country.
BarnaclesNaturally, no trip to Santiago would be complete without visiting the famed markets in the city, a testament to the gastronomic goodness the country has to offer. The most famous one is the Mercado Central, Santiago’s oldest market. The quintessential tourist spot, Mercado Central is housed in a building that dates back to 1872, while the market itself has been declared a National Heritage site, and features an astounding variety of the freshest seafood, some of which can only be found in Chile. 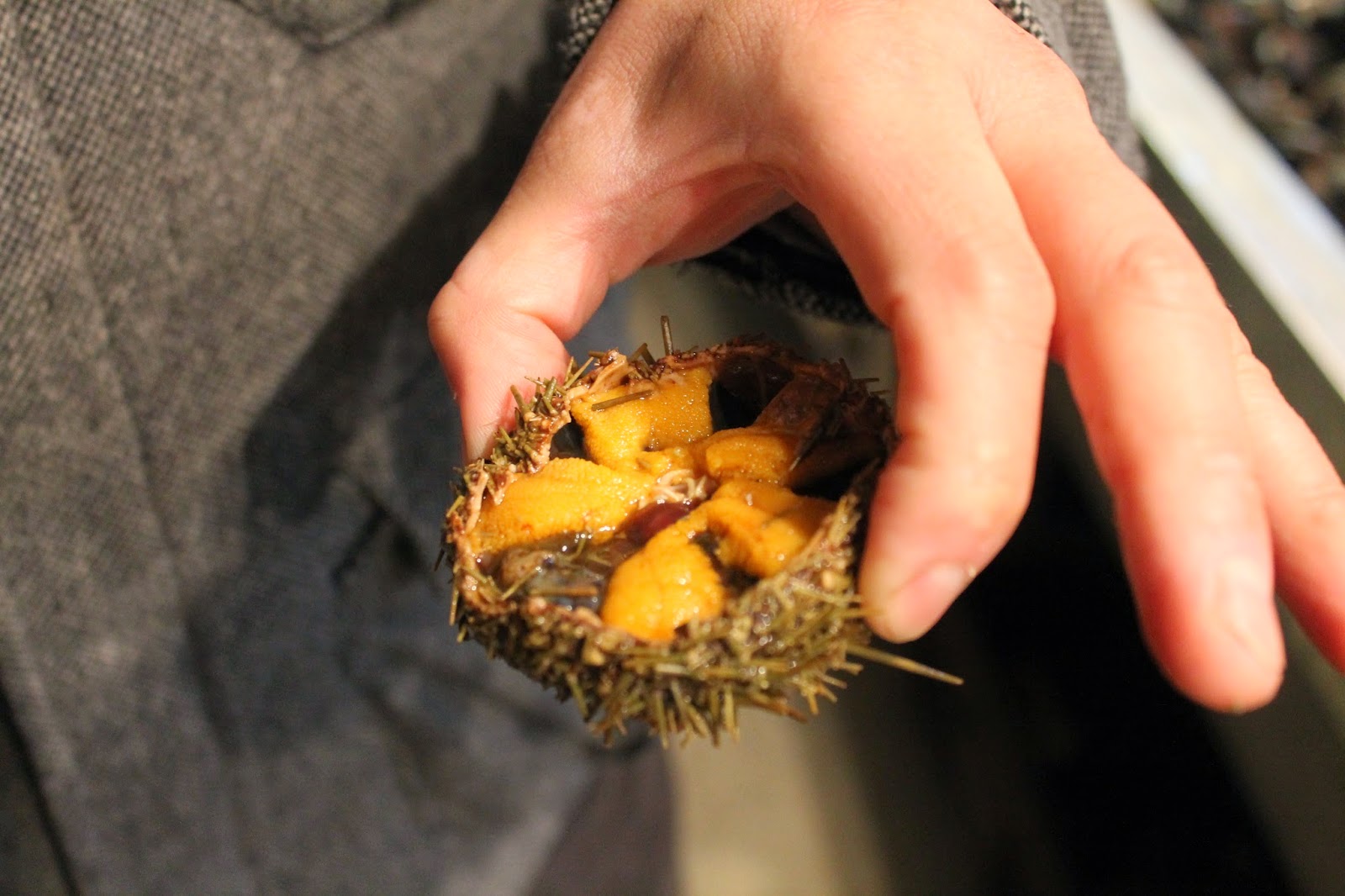 Sea urchinWe arrive at the building itself, and I’m delighted by the variety of hams and cheeses on display – from chorizo and salami, to camembert and provolone, this was just in one shop! We wait for our guide, Chef Cristian Correa to arrive, fighting the sub-zero temperatures of the coldest Chilean winter in 20 years, before walking into a kaleidoscope of colours, sounds and textures within the confines of this grand old building. 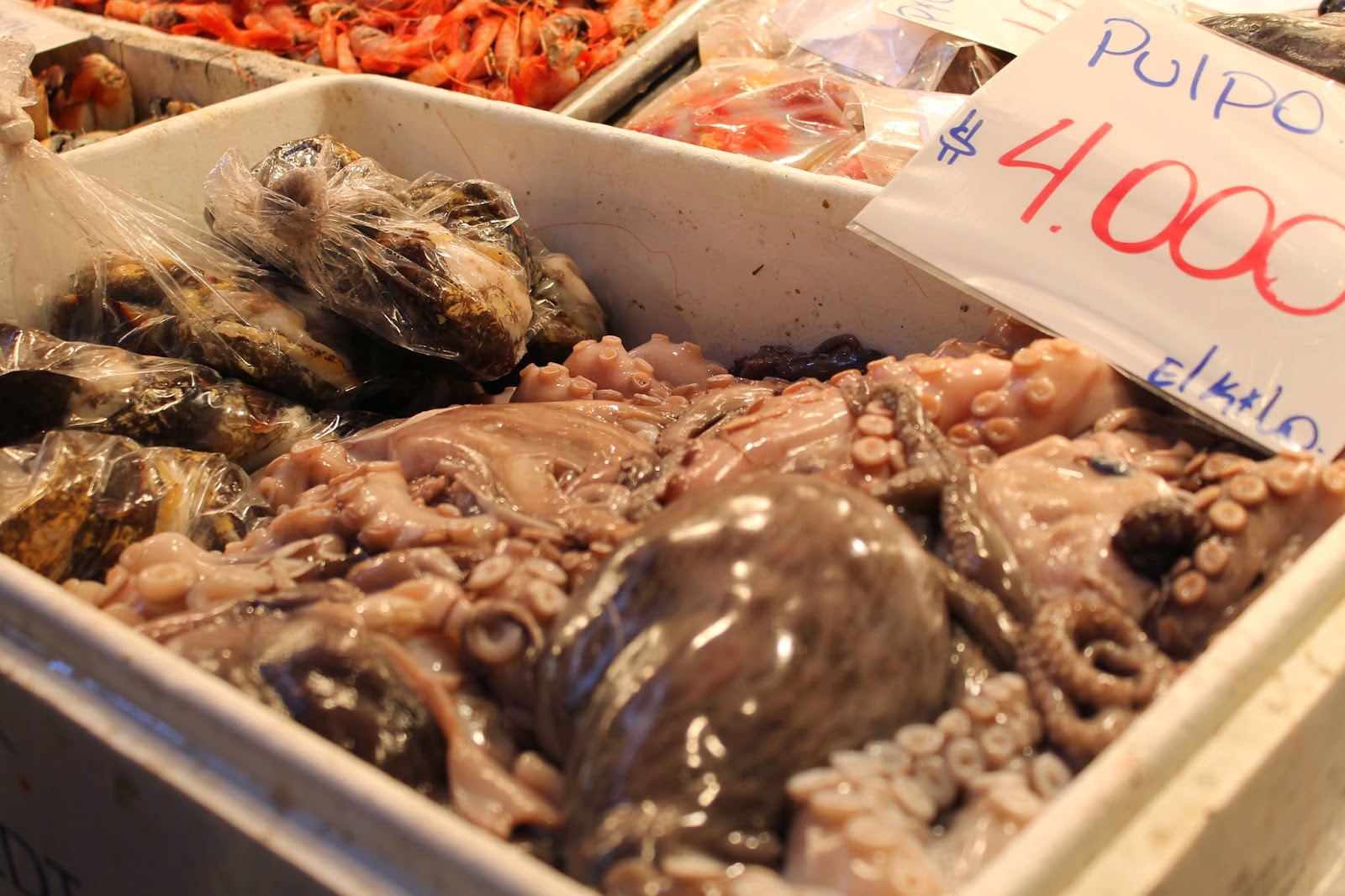 Giant squidLike many of his compatriots, Correa (who runs acclaimed restaurant Mulato) purchases the raw materials for his ever-changing menus from Mercado Central (and the adjacent La Vega market that sells fruits and vegetables), as his restaurant’s menu is dependent on seasonal produce. 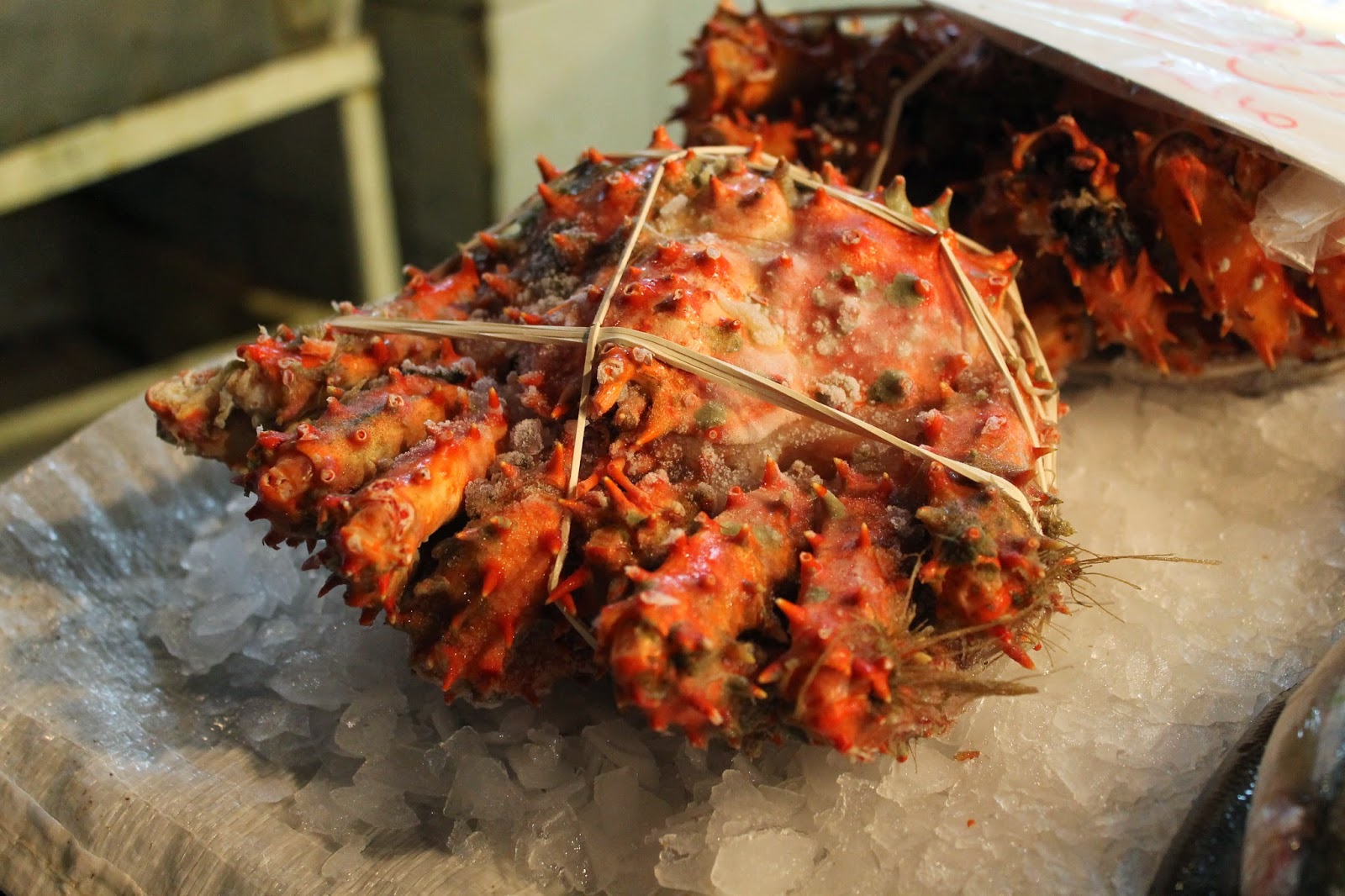 Giant crabThe bustling market is somehow chillier than the Arctic eight degrees Celsius that it is outside, but we soldier on and watch the huge pieces of fish being sliced up for eager customers. Every square foot of the market has a dozen vendors displaying shellfish, crabs, prawns, sea urchins, oysters, scallops, salmon and mussels, with each one yelling out that their prices are the best. Correa takes us to his usual vendor, who slices up chunks of salmon (with his bare hands in the freezing cold!) and shows off the inside of a sea urchin for Correa’s approval. “I only get the best, and this guy’s got it,” he laughs. 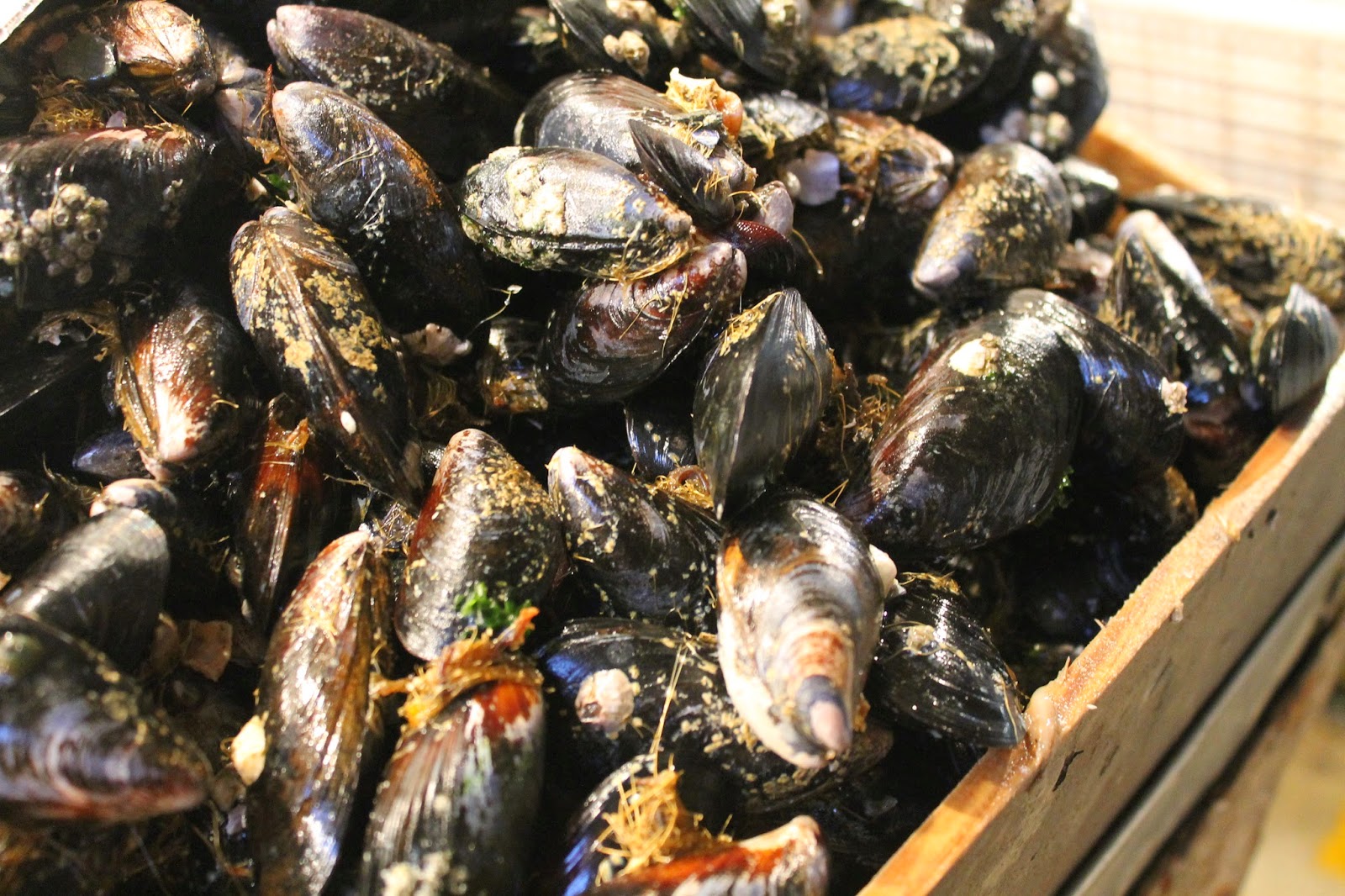 MusselsAll over the market we see an overwhelming variety of fresh seafood – anchovies, mackerel, sardines, hake, shrimp, cuttlefish, and even giant crab and squid! We spot some native species like the Patagonian whip hake and Chilean croaker, alongside bottom dwellers like barnacles, abalone, and razor clams. Sampling goodies may be a little tricky in the market itself, so the best way to enjoy all that fresh produce is to purchase some seafood and whip up a feast back home. But if all that shopping makes you hungry, don’t fret. Mercado Central has plenty of restaurants lining the inside of the market where you can eat all the amazing seafood you’ve purchased – that’s about as fresh as it gets I think! 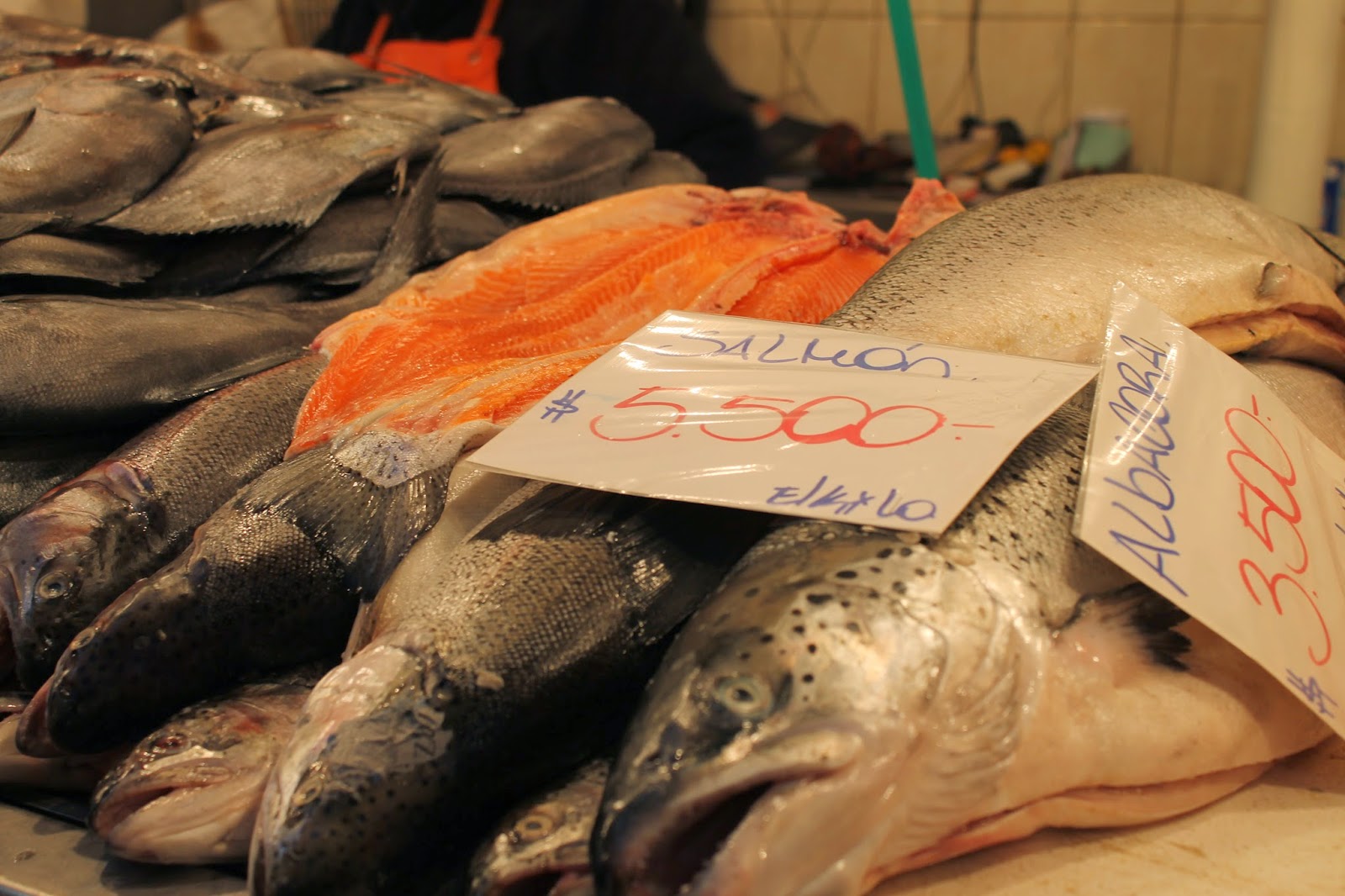 SalmonWe move on to the adjacent La Vega market, a short 10 minute walk away. As soon as we enter its premises I’m floored by the myriad of colours and textures that greet my eyes at every corner. Correa explains that La Vega (also known as Feria Mapocho) is one of the best known markets in the country, with thousands of people frequenting it everyday, to buy the freshest produce from Chile’s Central Valley. 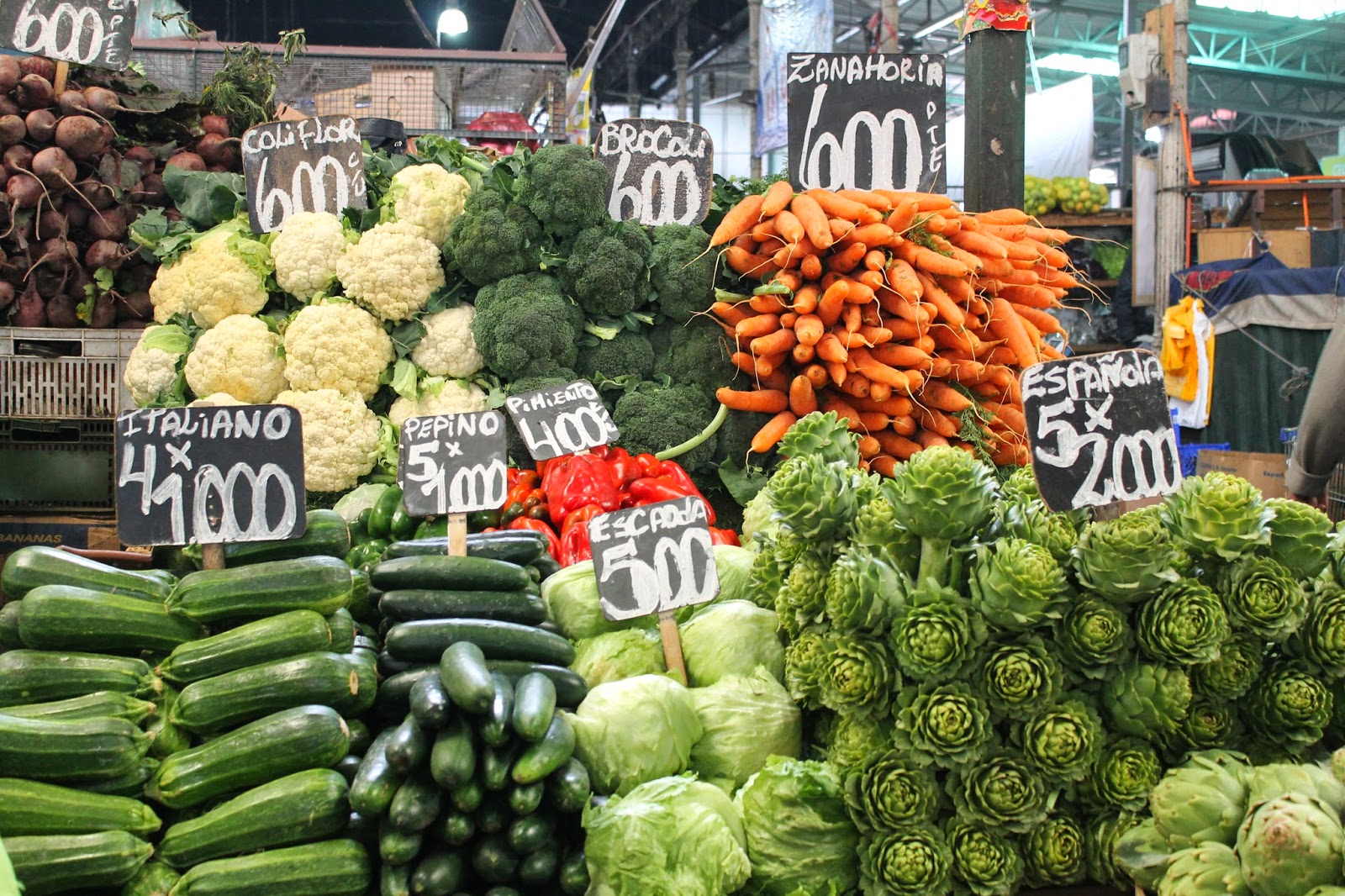 La Vega Chile has practically all climates, resulting in the ability to grow a smorgasbord of quality products, including blueberries, raspberries, figs, cherries, grapes, apples, pears, lemons, oranges, avocados, kiwifruit, peaches, nectarines, and plums. You name it, and La Vega’s probably got it all. 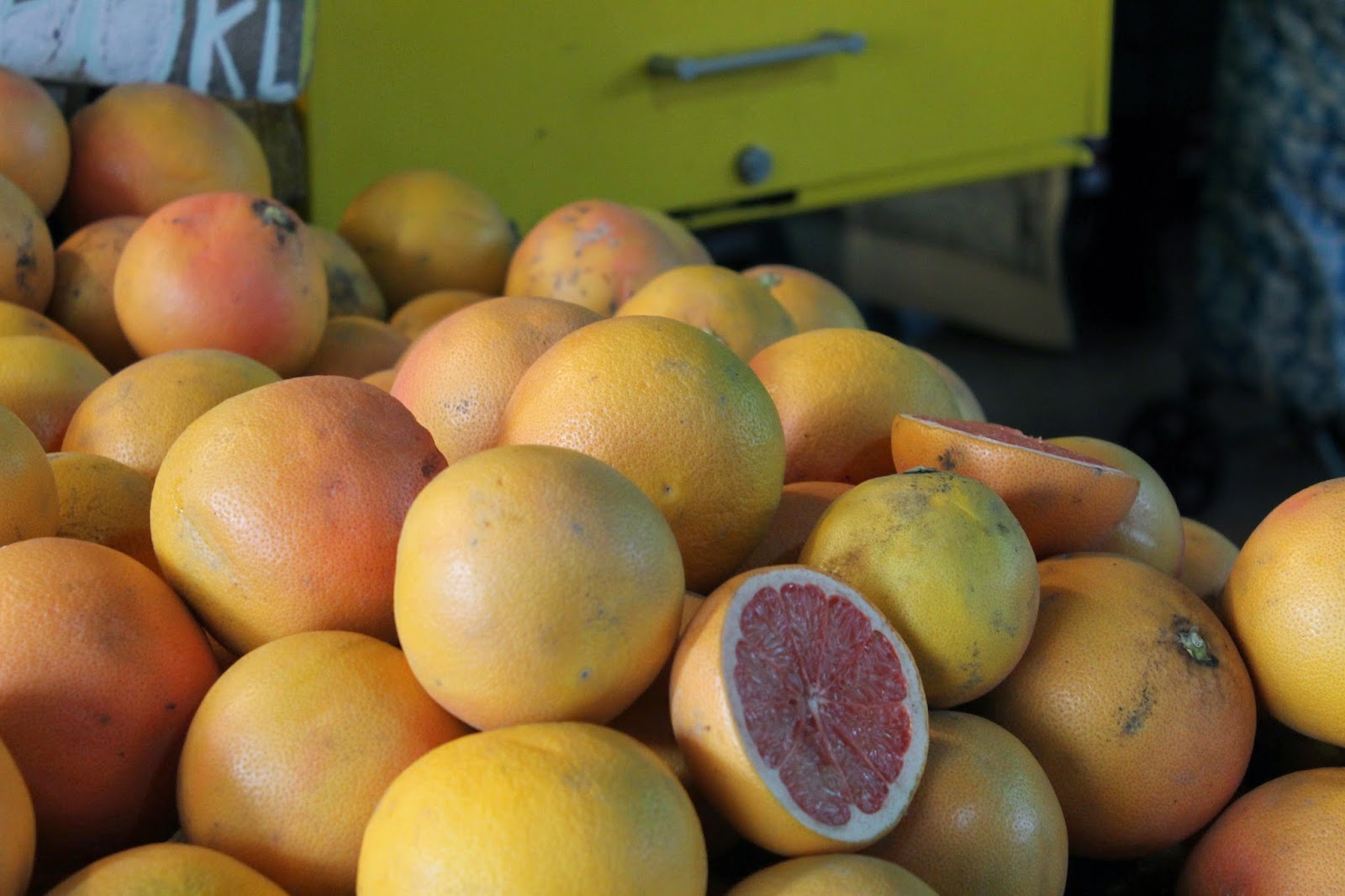 TangerinesA host of fresh fruit and vegetables line the huge containers of every shop, as greedy customers (such as myself) pluck juicy grapes and berries and wash it down with the array of fresh, tangy juices available at stands (I had, quite possibly, the freshest orange juice of my life here). 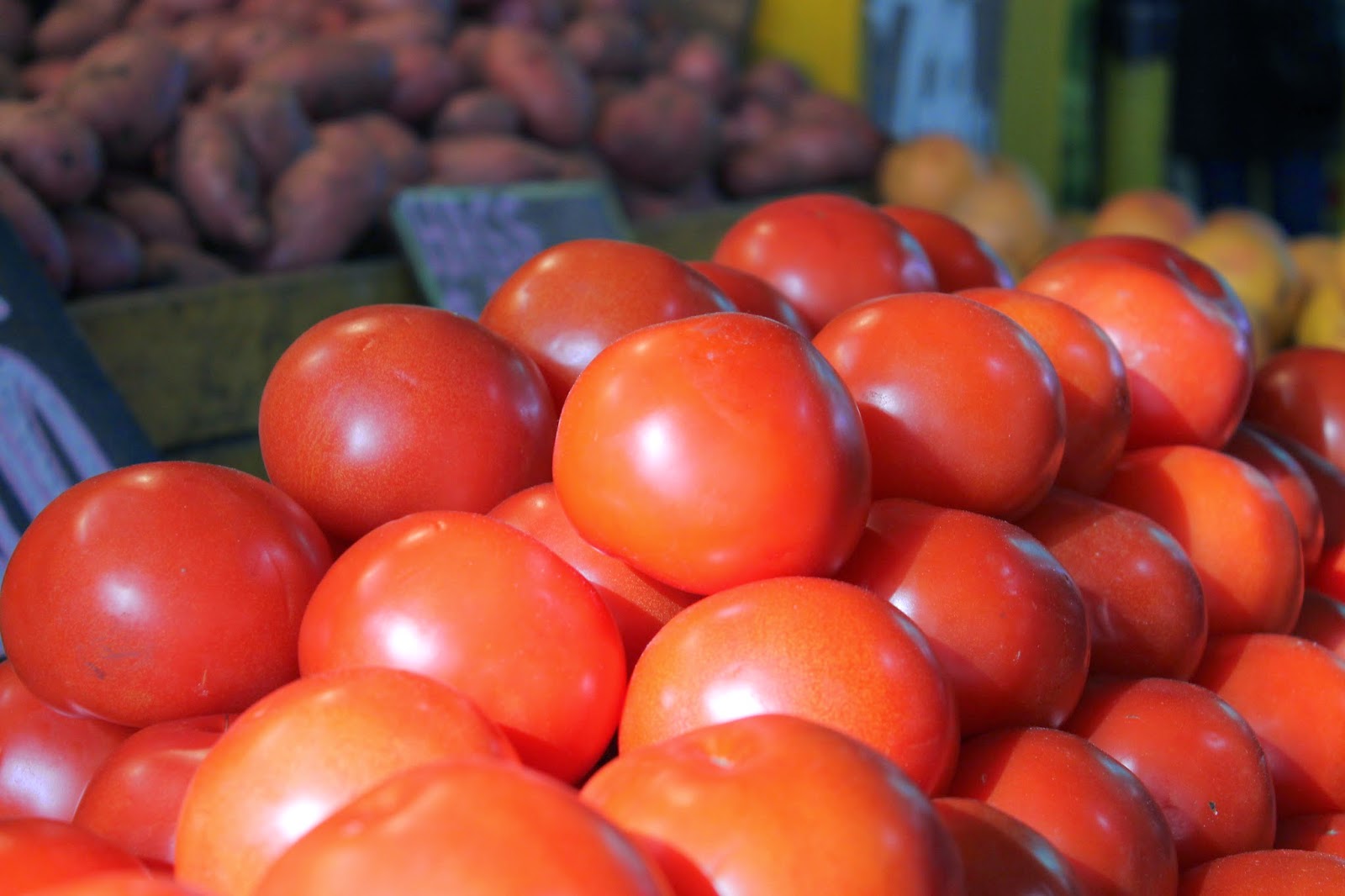 TomatoesSpices also feature heavily, with the famed Chilean merken (smoked chilli) packing quite a punch – luckily I had a bottle of water with me! 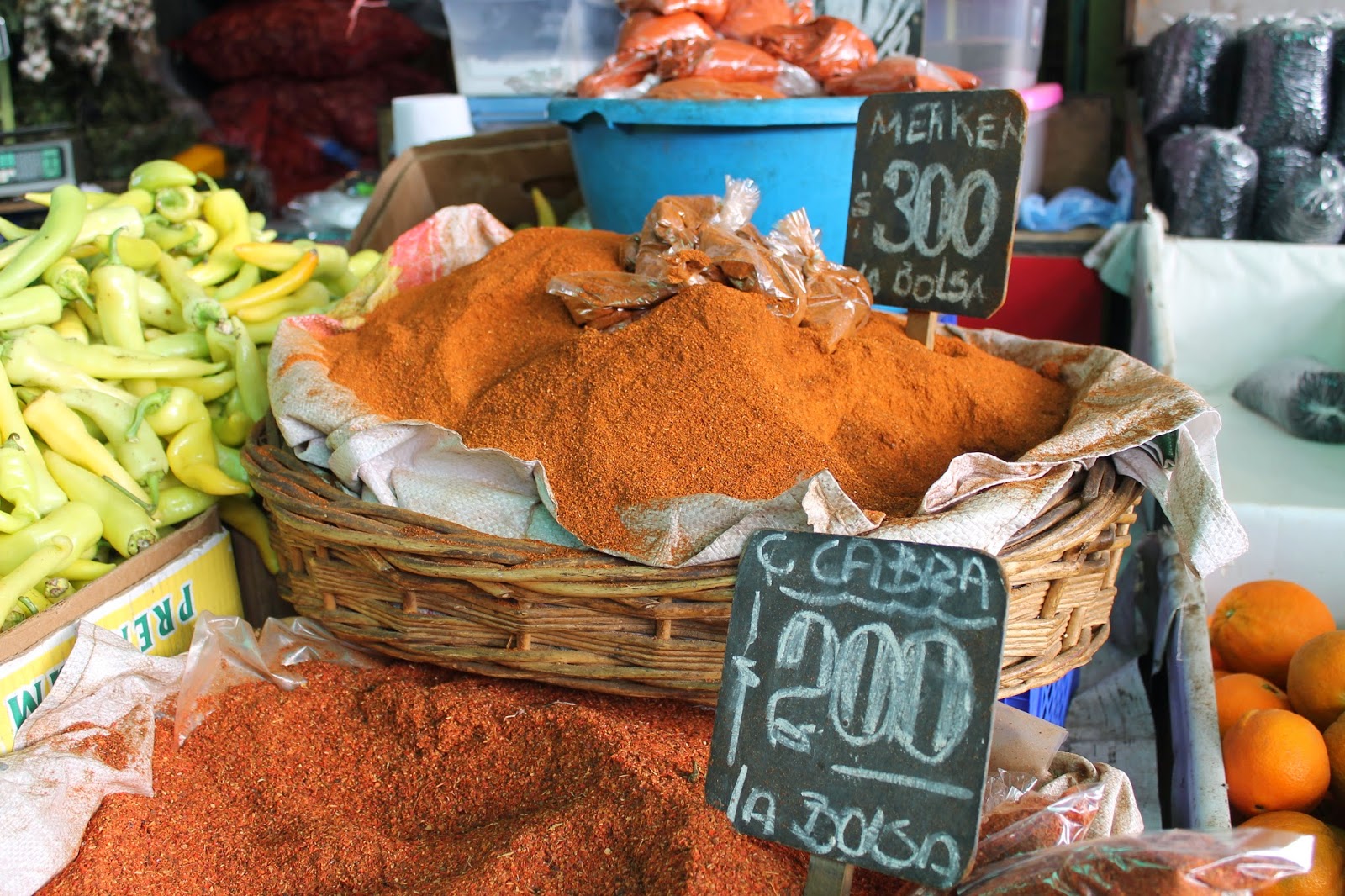 MerkenIf sampling all the fruit and veges on display doesn’t give you your fill, La Vega is also a great spot to dig into Chilean gastronomic goodies such as sopaipillas, cazuelas or humitas at the different restaurants that line the perimeter of the market. 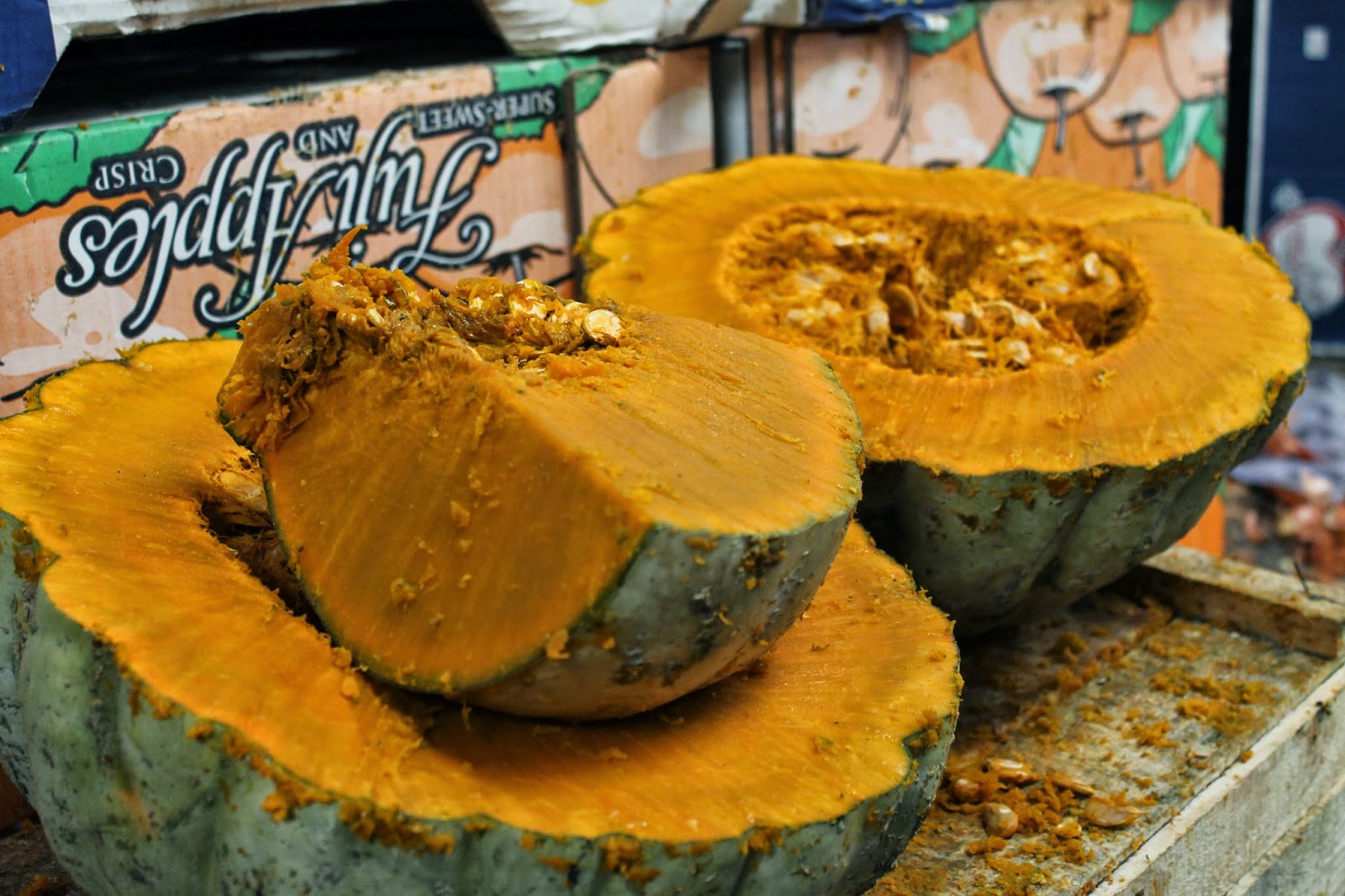 Giant pumpkinsI developed a bit of an obsession for the sopaipillas, eating them in every form possible, even managing to find some pebre (spicy Chilean salsa) for added zing! 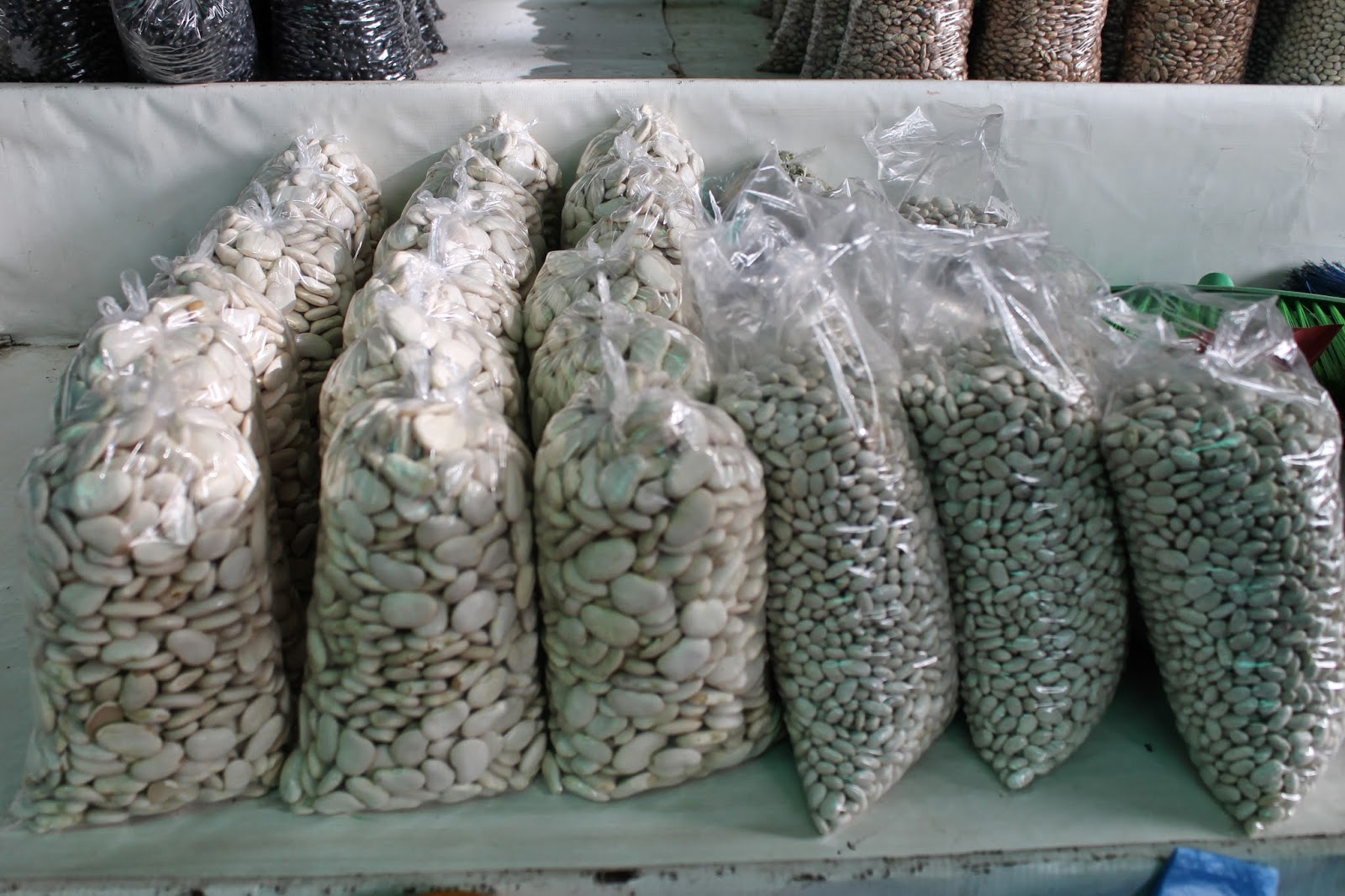 All kinds of beans!The quintessential definition of foodie paradise, the Mercado Central and La Vega markets are the best spots in Santiago to marvel (and sample) all the exotic (and delectable) foods on display. Bring your appetite!
Mercado Central21 de Mayo & General MacKenna
www.mercadocentral.cl

For more information on Chilean products in Malaysia, visit www.prochile.com