Words by Han Sen HauPhotos by The Yum List (Monica Tindall)
I had a rough Friday night. I wish I could say it was from the amount of Tequila I downed but really it was time spent alternating between Tolstoy’s colossal Anna Karenina and Meier’s horrifically addictive Civilization V. I was battling other civilizations for world dominance while commiserating with Kitty’s misplaced affections for the amorous count when I looked out my window and, in my soporific stupor, realised that it was already a Saturday morning. And so, it seemed perfectly reasonable, in my woozy state, to nurse my stupefaction with caffeine and cake instead of accepting Hypnos’s embrace, all the while bemused over my uncalled for reference to Greek mythology as I tried to locate my car keys…
Feeka Coffee RoastersThe weather was overcast so I dodged the migraine from scintillating sunlight, and chose to settle underneath the verandah of this quirky little café called Feeka along Jalan Mesui, of which, I couldn’t remember how I even got there. Compared to its more colourful neighbours, Feeka stood out in its monochrome, along with the oblique mural emulating pen-line drawings on its wall by the entrance. I was greeted by my host for the morning, Alex, who simply needed a trilby and studded earring to complement his glorious beard and Buddy Holly glasses to land a feature on GQ. After a quick exchange of handshakes, the smell of coffee wafting from inside was beginning to have an effect on me and I decided to start things slowly and smoothly… with a piccolo latté. 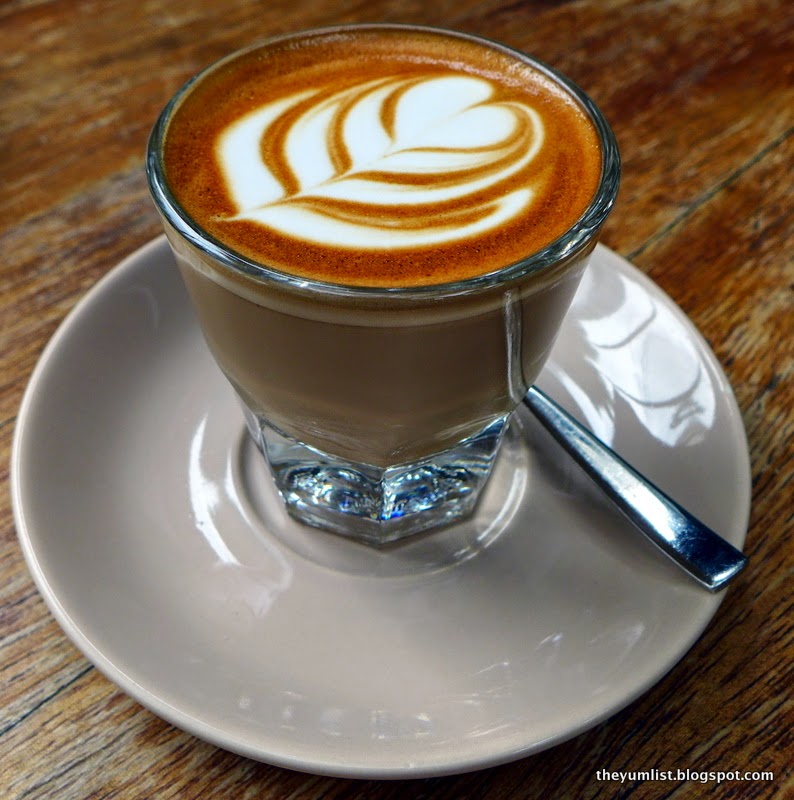 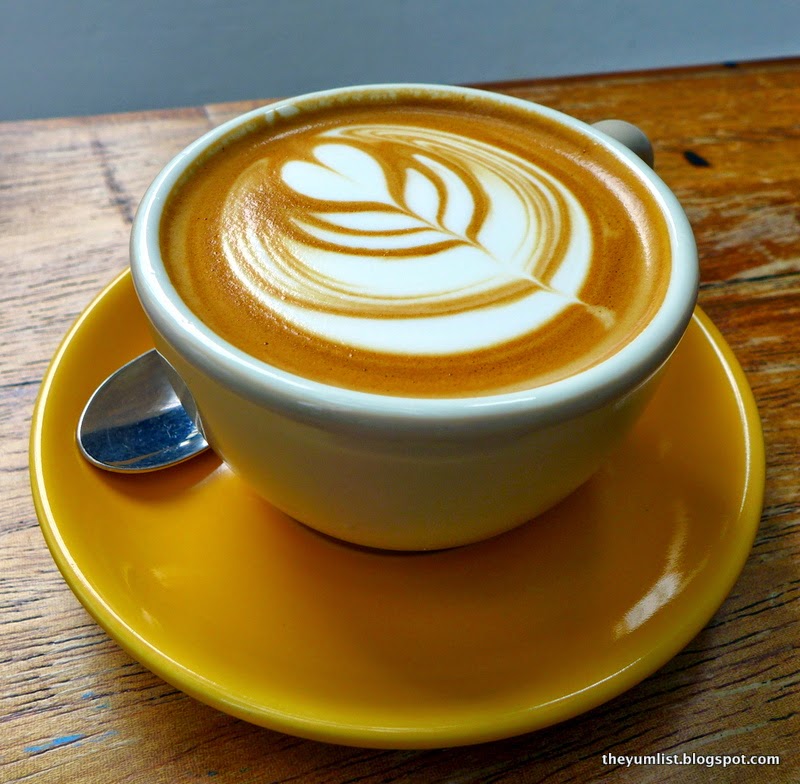 Flat WhiteI should’ve brought Tolstoy with me. The Piccolo Latté (RM10) packed a punch for its size and engulfed the palate with a well-balanced flavour. And the buzz… I was alive and kicking within minutes and felt like taking on 500 pages of Anna Karenina right there and then. This petite perk-me-up was a nice welcome to my morning and wasn’t as intrusive as anticipated, kind of like that friendly nurse who gently wakes you up, fluffs up your pillow, brings you your breakfast, then smacks you on the side with the book you should’ve finished reading weeks ago, but couldn’t, because you didn’t have latté for company. 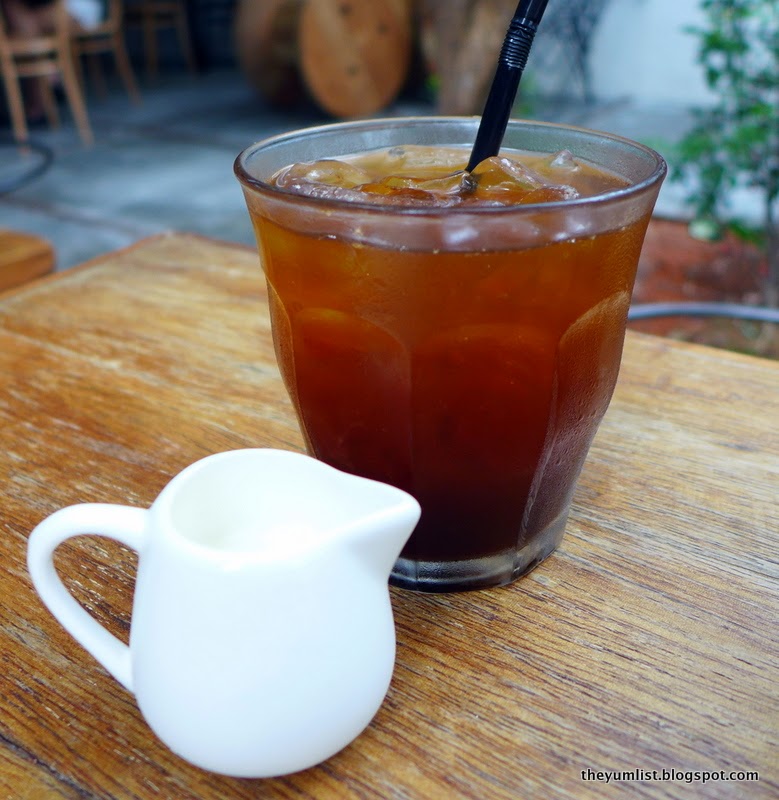 Iced Coffee – appropriate caffeine fix for a hot dayAs a student, cafés with fabulous cakes were favourite haunts of mine and I’ve always made it a personal quest to sample every single gâteau… whenever humanly possible. So while the piccolo latté was still working its magic, I endeavoured to devour three of Feeka’s cakes: Lemon Poppy Seed, Hummingbird, and Lavender Cherry Pound (RM11 per slice).
The Lemon Poppy Seed cake was familiar, fresh, zesty and incredibly fluffy. I’m glad this one wasn’t topped off with a layer of icing, which meant I could handle a couple of these on a good day, and that it’s a cake I’d bring home to meet my parents without ever worrying of their disapproving expressions, being so adverse towards saccharine. 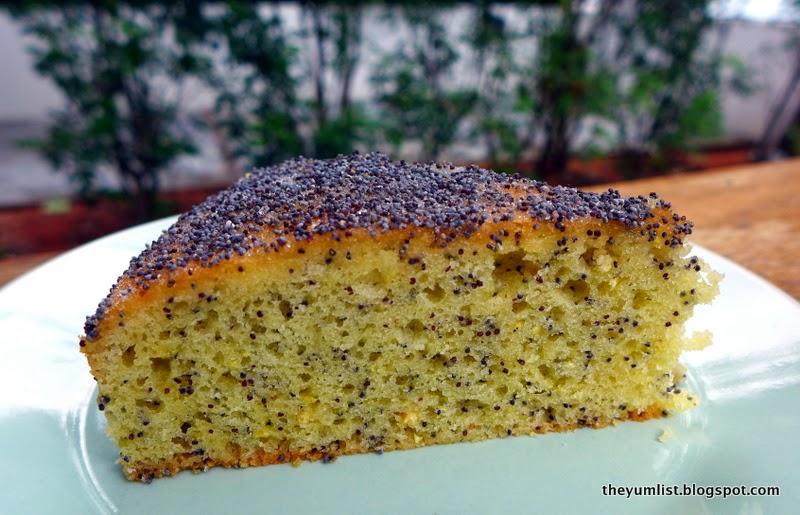 Lemon and Poppy Seed CakeOn the other hand, the cream cheese icing laced with coconut shavings atop the Hummingbird was delightful. The cake’s texture reminded me of a well-made carrot cake I absolutely had to have once a week while studying in the UK, and was improved by the chunky walnuts embedded in it. 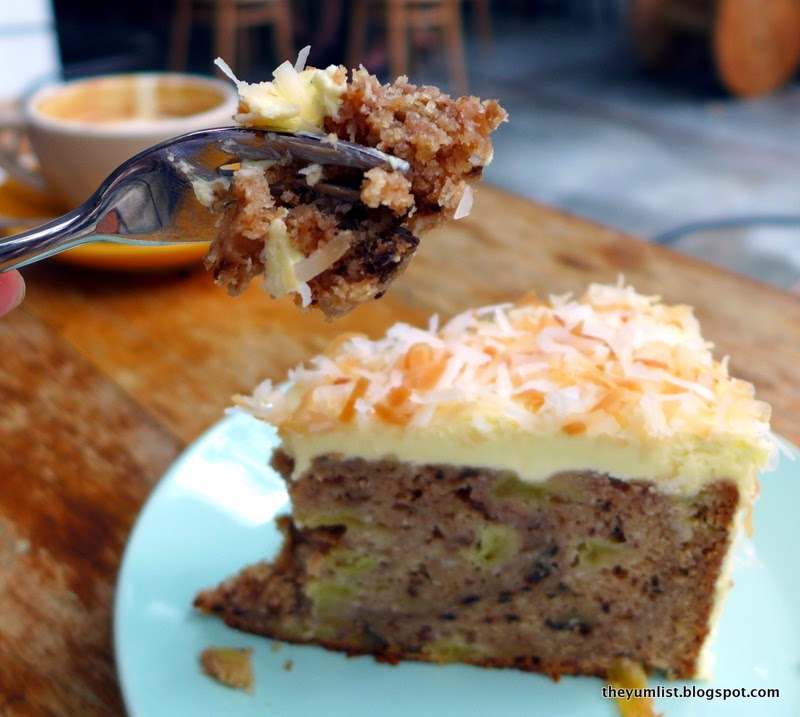 Hummingbird CakeAt this point, I suppose it’s obvious that my favourite of the trio would be the coquettish Lavender Cherry Pound cake, having saved it for last. The cake was incredibly dense, which (dare I say this) reminded me of mooncakes. It was a little on the sweet side, but I love how it’s lightly perfumed by the lavender, which incidentally, is one of my favourite flowers… I guess I’m losing credibility here. That said, it was invigorating to relish cakes of varied densities and texture, contrary to what I’d get in most bakeries. The other great thing about the cakes was that I could alternate bites between them without having the flavour of one overwhelm another, so thumbs up for balance right there. 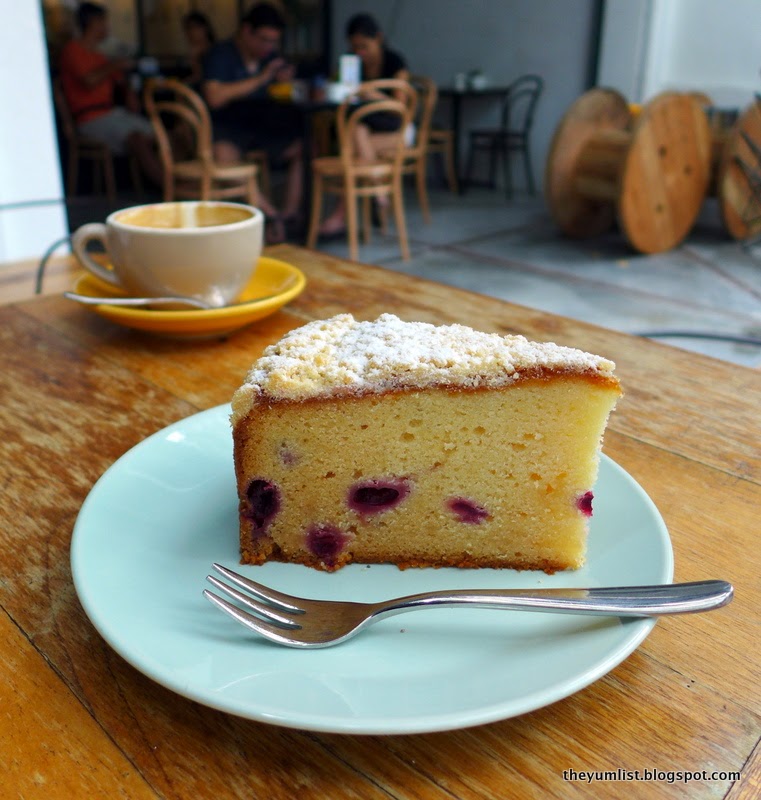 Lavender Cherry Pound CakeIn addition to the cakes, Feeka also offers pastries made on-site such as the Almond Cinnamon Raisin (RM6.50). The cinnamon roll was a nice surprise as it didn’t bombard my tongue with a cloying sweetness and a slick of excess butter. Normally, I’d stop after the first bite but this one kept me going until only crumbs were left on the plate. 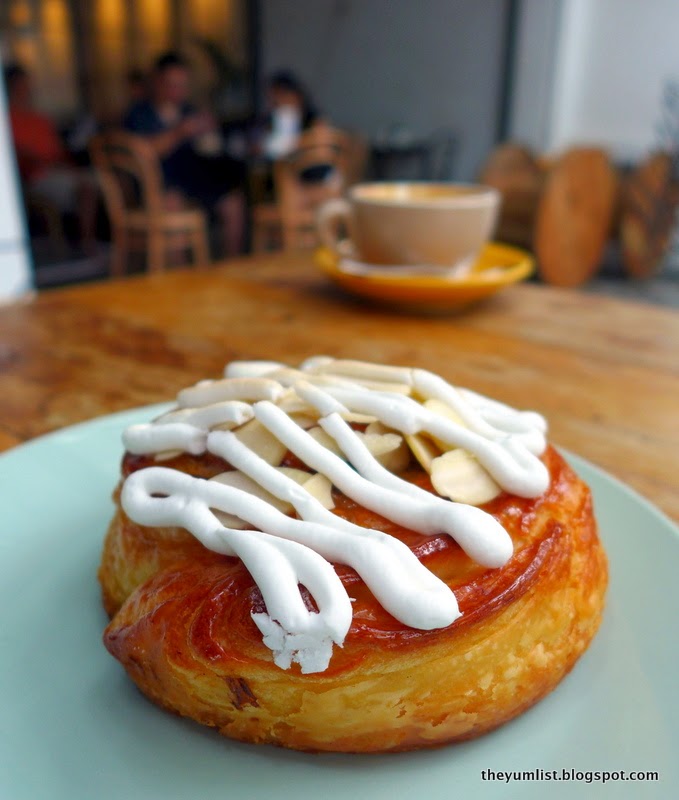 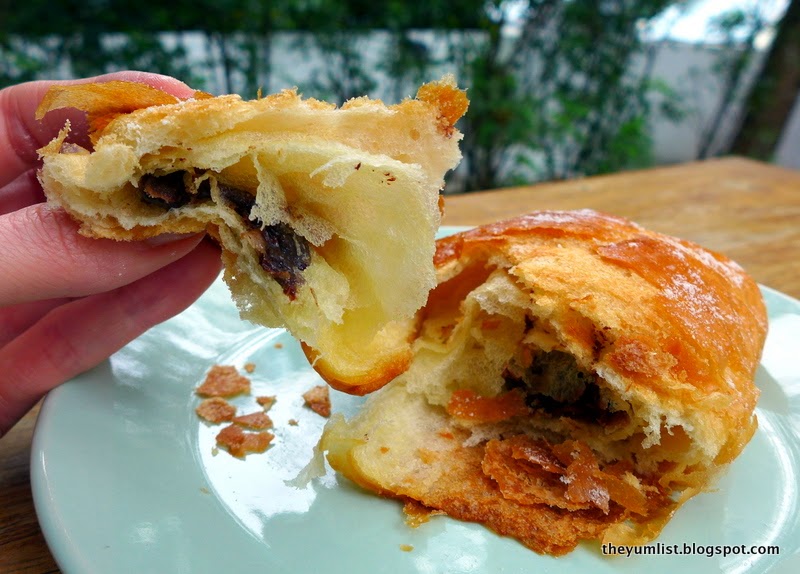 Chocolate CroissantHaving started the day beautifully with cake, cake, and more cake, I needed a palate cleanser before moving on to the heavier stuff… so a cappuccino made perfect sense since, well, more caffeine couldn’t possibly be a bad thing. The Cappuccino (RM10), to me, was a mellower variant of the Piccolo Latté: while I wouldn’t hesitate downing the latter just for kicks, I prefer taking my time with the cappuccino, having a sip every few minutes or so. With the additional stimulant saturating my veins, I suddenly had a surge of confidence (or foolhardiness) to tackle Feeka’s All Day Breakfast menu.
I began with the simple Scramble Platter (RM16)—scrambled eggs on toasted rye bread with lamb sausages. The eggs were well-seasoned and the hint of paprika peppering them was a plus. I became a little dewy-eyed over the lamb sausages as they tasted so similar to the Merguez sausages I got from Morrisons in the UK, which, I can assure you, is a compliment. 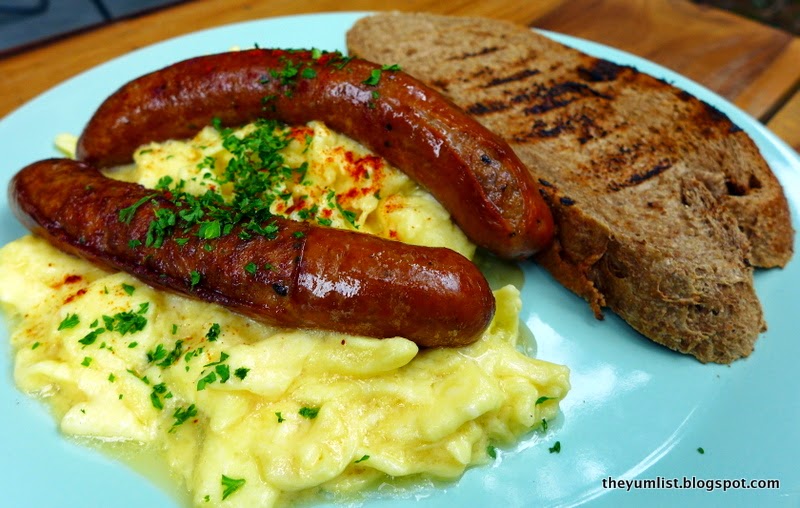 Scrambled Eggs and SausagesMy second main, the Feeka Omelette (RM16), was a real treat, though it did take me by surprise initially. As I bit into the omelette, I was alarmed by the lack of flavour despite the mild cheddar and cauliflower enveloped in it, so I took a little of the sautéed mushrooms to compensate. To my delight, the mushrooms aromatised the otherwise bland omelette, which then led me to experiment with the tomato jam. The result was sublime, and I soon learnt from my host that the dish was deliberately deconstructed and segmented to provide for a more gratifying experience—an ingenious design indeed. 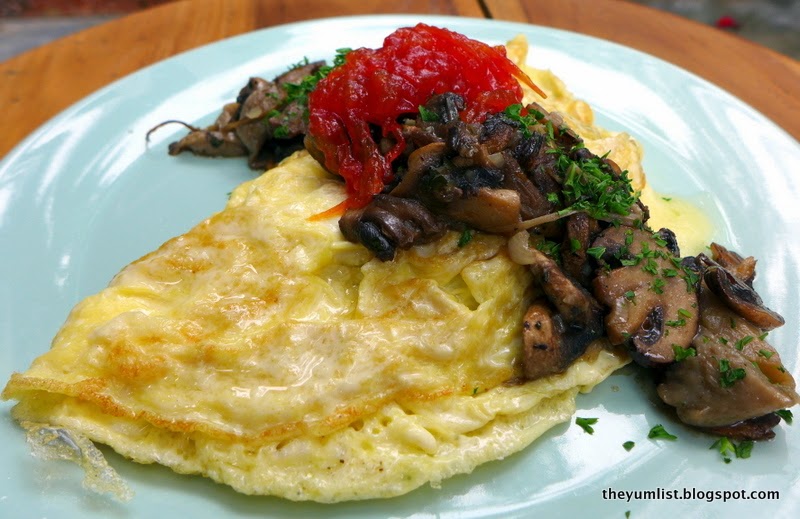 Feeka OmeletteThe Brioche French Toast (RM16) would’ve slipped my attention were it not for the distinctive use of spiced pineapple and orange sauce, consequently uplifting the dish with a citrusy tang that balanced out the rather savoury bread. 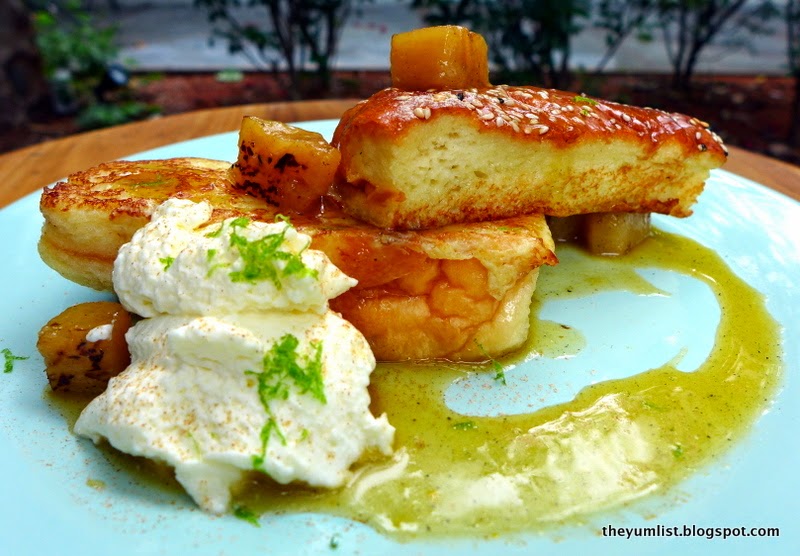 Brioche French ToastThe big surprise for the morning, however, was the Yoghurt Parfait (RM12). It felt a crime eating something so lusciously creamy and thick without feeling remorseful. Then again, I did have three cakes to begin with so I couldn’t be bothered with guilt. The yoghurt did not dribble off the spoon as I scooped it and I can’t tell you how orgasmic that is. The texture was just perfect and I’m eternally grateful that it contained watermelon chunks instead of something more sapid such as strawberries or kiwifruit. Forget about Fro-Yo, this is Fab-Yo. 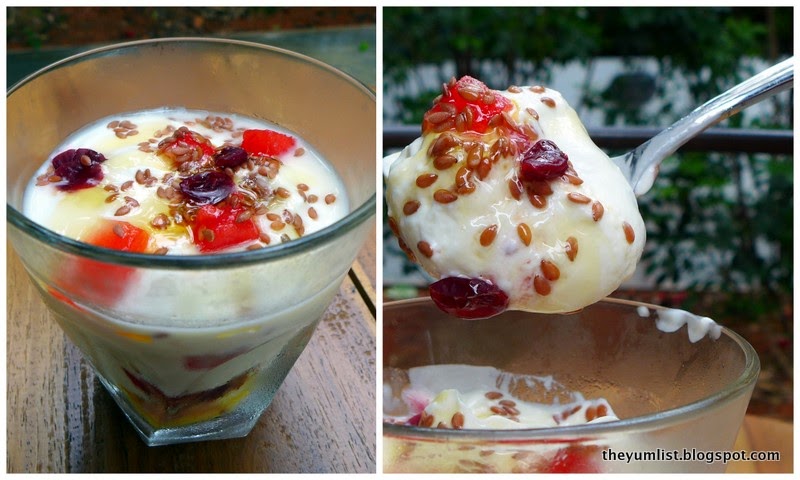 Yoghurt ParfaitTo conclude my caffeinated morning, I went for one of Feeka’s AeroPressed specialty brews, the award-winning El Salvador (RM18). The coffee was marvelously rich, with a pleasurable, lingering after taste that just slides down the throat. By the time I finished imbibing the last drip, I was one sip away from floating out of the exit… Talk about ending on a high note. 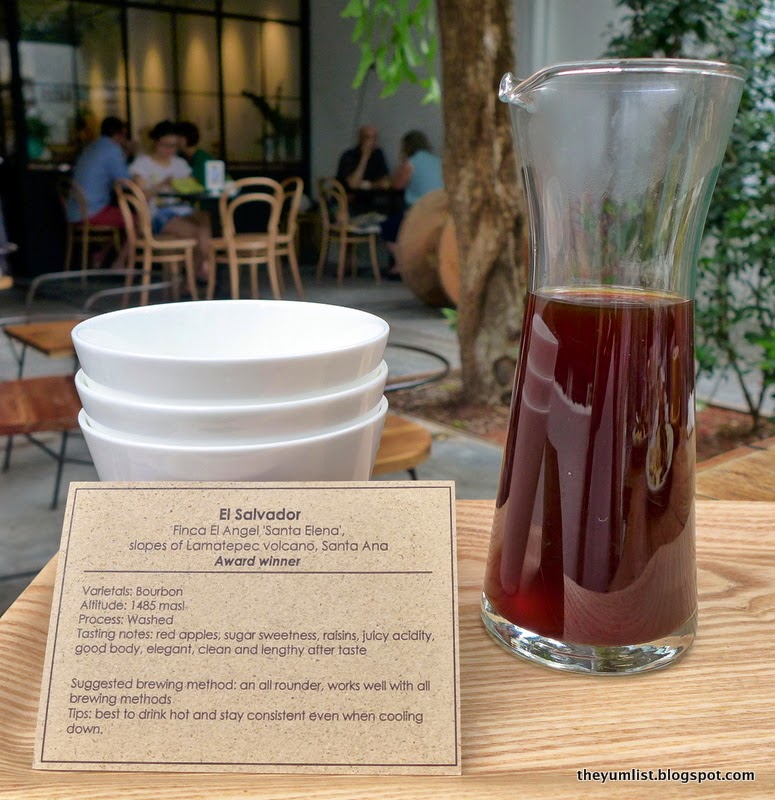 Aeropress Single Origin CoffeeWith Jalan Mesui rising in popularity as others gain notoriety, it’s fabulous to have a Bohemian café thrown into the mix of colourful bistros along the strip. It’s been a while since I’ve found a place I wouldn’t mind lounging at with a good book for an afternoon, and I think I have with Feeka. 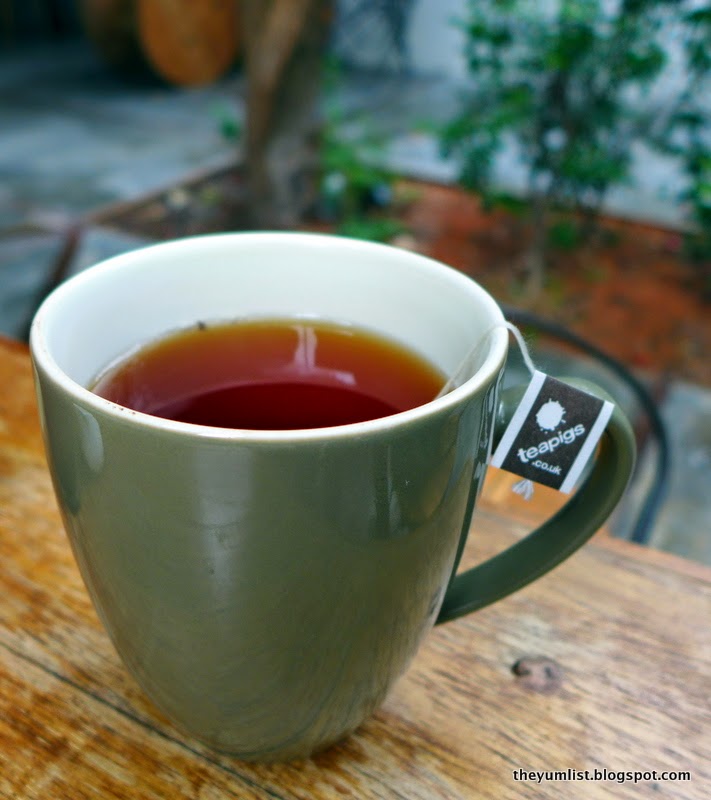