The team at Colonial Café, The Majestic Hotel Kuala Lumpur, are enticing diners in to try their offerings with set lunch and dinner menus.

The Colonial Cuisine served at the restaurant is the result of a bridging of cultures. Hainanese chefs attempting to recreate traditional British dishes for the colonists, using local ingredients and familiar cooking techniques, prompted the consequential fusion which is just as much a part of Malaysia’s heritage today as are the iconic twin towers.

Hainanese chefs leading the kitchen at The Majestic Hotel Kuala Lumpur ensure authenticity of classic dishes such as the Hainanese Chicken Chop, Prawn Cocktail, Mee Hailam and Mulligatawny Soup. While some readers might gasp at the prices, (RM55 for chicken rice balls), at least part of the expense goes towards the recreation of romanticized memories of the colonial era in a carefully and beautifully restored location. The introduction of excellent-value three and four course set meals for RM90++ and RM120++ respectively, might further return respiration to a regular pace.

The Bar at Colonial Cafe, The Majestic KLNeutral tones paint the walls and, dark polished wood furnishes the space. Warm illumination glows from wall lamps but also hangs from the circularly imprinted ceiling. Fresh floral arrangements adorn the tables dressed with crisp white linens. Lush leather chairs make a cozy seat for pre or post dinner drinks, but a spot on a bar stool almost guarantees a good yarn and sound advice from the bartender. In my opinion though, the atrium holds the best tables in the house for lunchtime indulgence. A magnificent glass ceiling fills the area with natural light, while potted orchids add sprouts of colour with their blooms. Evenings bring the smooth sounds of the legendary Maestro Alfonso Soliano family, making dining tables in the main room most advantageous for dinnertime. Whenever you choose to visit and wherever you decide to sit, you’ll be surrounded by an elegance and quality of design, that is rarely found in today’s fast-paced, throw-away society.

Featuring items not found on the regular a la carte menu, the sets hold more dishes that lean towards homey Western comfort, rather than Hainanese creations. The set menu changes daily and guests can choose to dine on either three or four courses, available both at lunch and dinner. A starter, main course and dessert are included, as well as tea or coffee. Expect to find hearty recipes such as Traditional Beef Wellington, Pepper Crusted Rack of Lamb and Prime Rib of Angus Beef.

We were fortunate enough to partake in both Wednesday and Thursday four-course sets.

Juicy Whole Baked Mushrooms began our experience. Facing bottom up, the fungi acted as cups for just-picked arugula leaves and a crunchy shredded fried egg topping. Drops of balsamic dressing gave a tangy sweetness to a starter that was eagerly devoured. Both hubby and I would love to see this available a la carte. 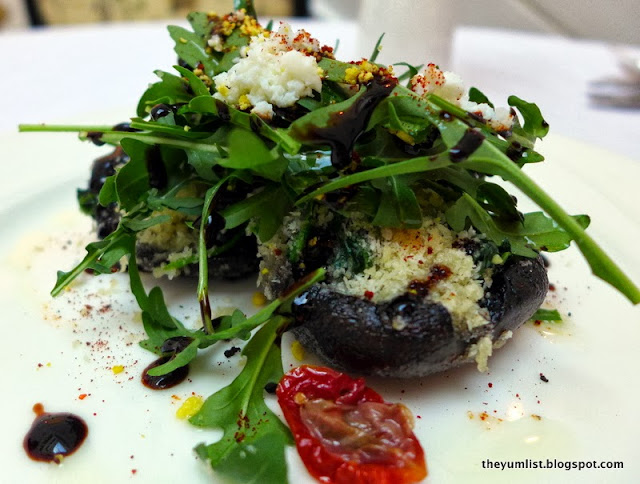 Cream of Sweet Roast Tomato Basil Sabayon filled second place in the line up with a fresh red soup, broken with a spoon of cream and centre puddle of herbs. 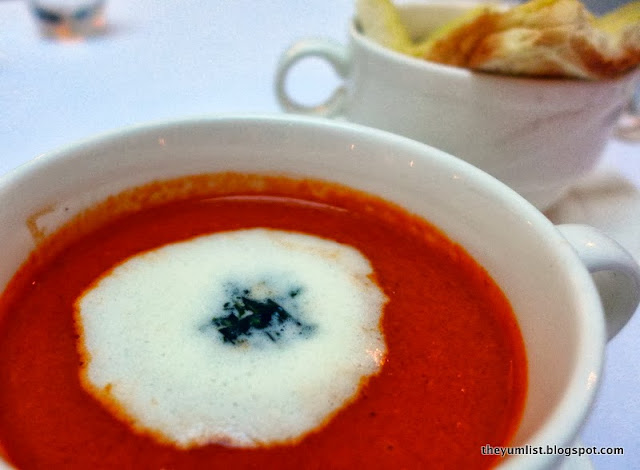 Roast Atlantic Codfish came as a hearty main. Golden chunks of flaky fish sat high upon a fluffy brie and potato mash (heavenly). A white sauce full of parsley leaves creamily slathered the top. It both looked and tasted luscious and the plate was scraped clean. 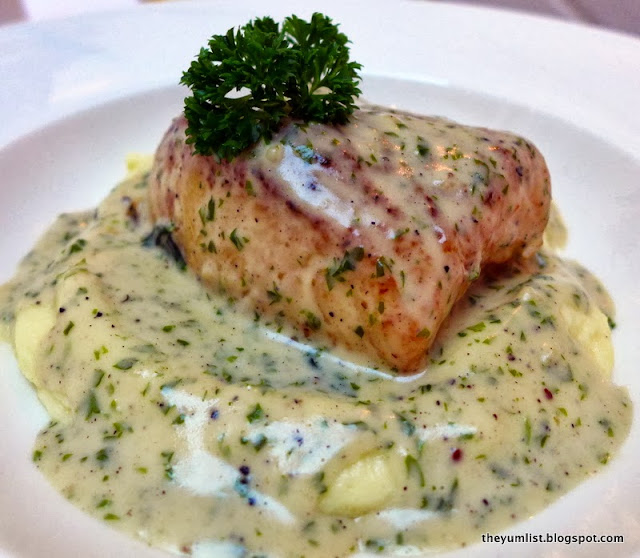 Rice Pudding finished Wednesday’s offerings. What could have been an ordinary dessert was snazzed up with a surprising caramelized (crème brûlée –like) crust and, freshened with a berry compote. Another dish where not a grain was left. 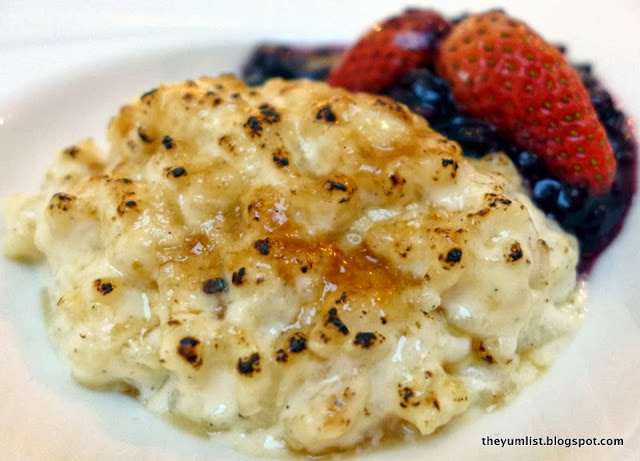 Homemade Corned Beef Hash topped with a fried egg, Madeira jus and deep fried garlic brought back fond memories of my mum’s own salted beef. A round of roughly mashed potatoes was mixed with small chunks of meat and onion and crowned with a runny egg, which oozed lusciously over its base when broken. A sprig of parsley brightened the top. It tasted like last night’s leftover’s (you know how food always has more flavour the next day) mushed together and fried up forming a great starter, but what would also make a fabulous breakfast. 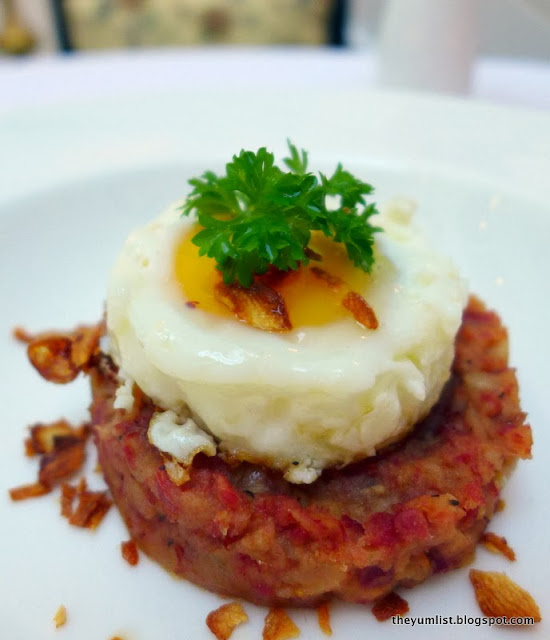 Traditional French Onion Soup looked extra homey with its covering of soft white bread and slice of Gruyere cheese baked until golden. Rich and warm, we fondly remembered winter days and wanted to take the bowl and snuggle up under a cozy blanket, to slurp it down to the very last drop. 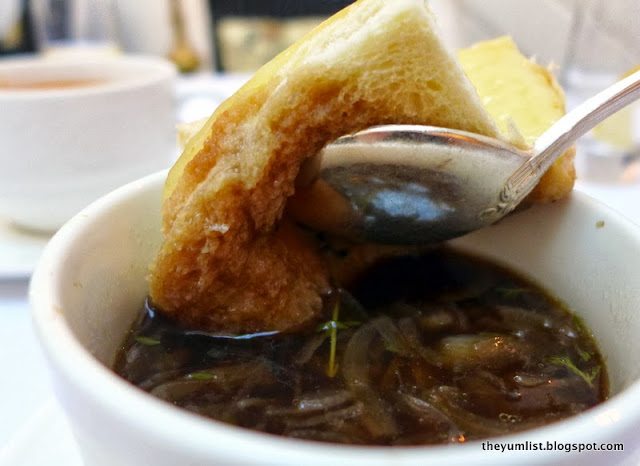 The main course of the day was the Salmon en Croute, filled with scallop, lobster spinach mousse and sided with nouvelle potatoes in a tarragon butter sauce. The dish arrived on a copper platter holding each section in individual bowls. The pastry cased salmon and its companions were so liked by hubby that he has already started making plans as to how he can recreate its loveliness at home. 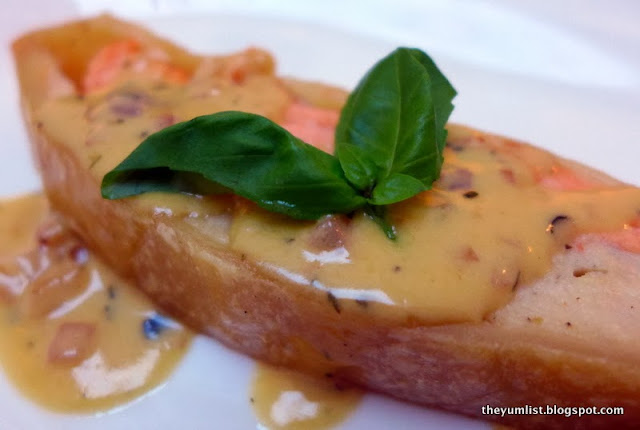