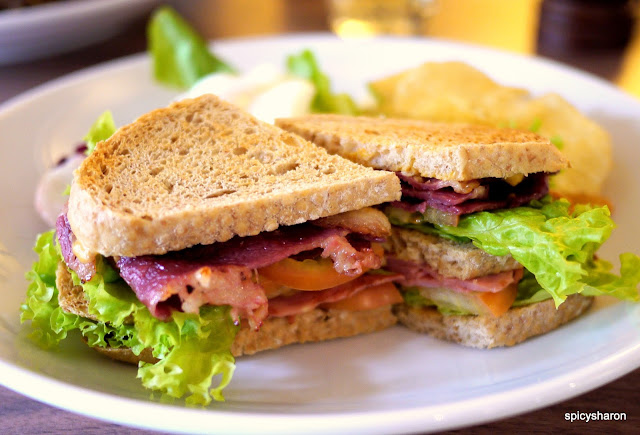 I love my big western fry-ups, never once failed to make me gleam with joy. *dabs tears away*

I also liked the thought of spending my precious Sunday over a great meal and with great company.

This time round, I will be taking you to Table Talk – they said this place serves real food. I have always enjoyed my coffee but the coffee here appeared to be a tad-off for me. I wouldn’t call it terrible, because nothing would beat the horrible one I had at Starbucks, Paradigm Mall, but this cuppa wasn’t that memorably good either.
My two cents worth – If breakfast sets are one of the key sellers at a restaurant, it would pay big time to serve good coffee as it normally comes hand in hand. Moving on…..
Lemon Ribena Soda. Rm5.50. 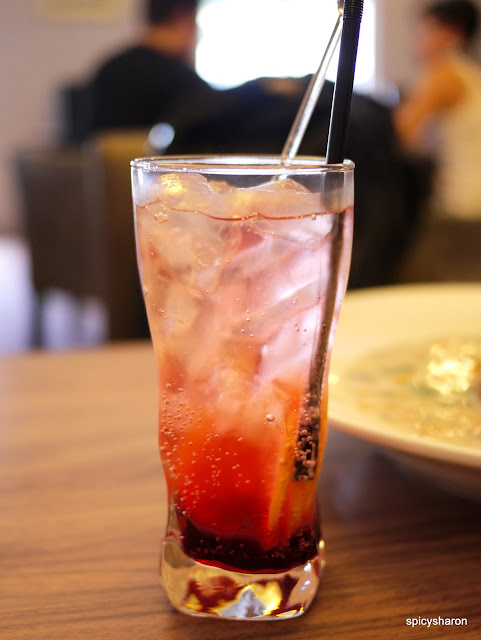 We ordered countless glasses of these and I lost count, seriously. One of my friends had three! Either it was really good or he was just plain thirsty. 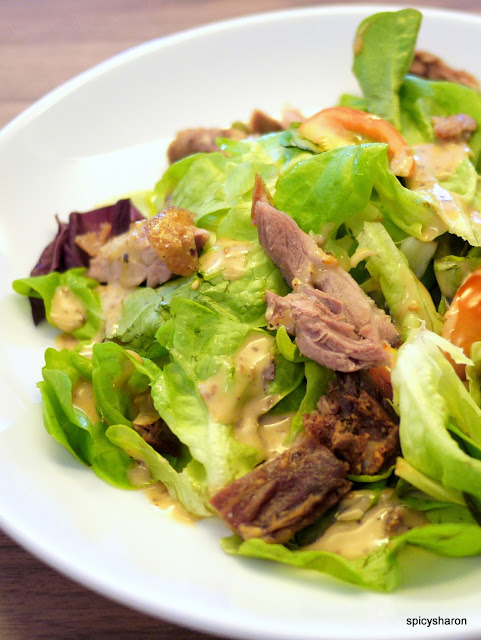 Tossed in Table Talk’s signature roasted sesame dressing, the greens were fresh and crisp and the duck meat flavorful and chewy, just the way I like it. It was a great and refreshing start to the meal. 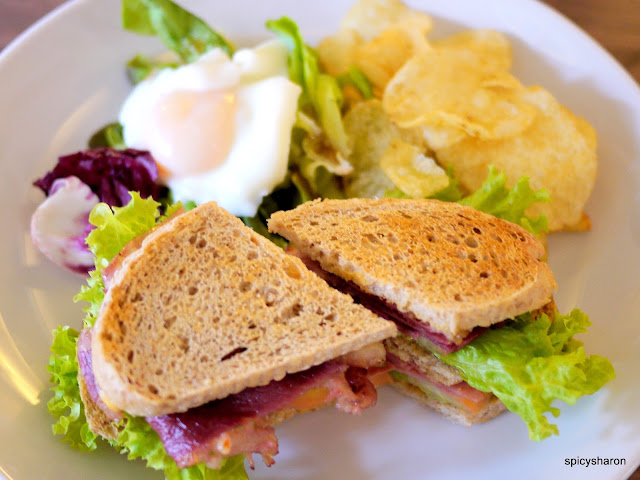 A triple decker of crusty toasted wholemeal bread spread generously with XX and filled with soft, chewy bacon and ham with just the right amount of salads to give it that texture and crunch.
What could go wrong? Dry bread + Dry meat + Dry greens – Lack of sauce = Dry sandwich.
Ultimate Brekkie. Rm18.00. 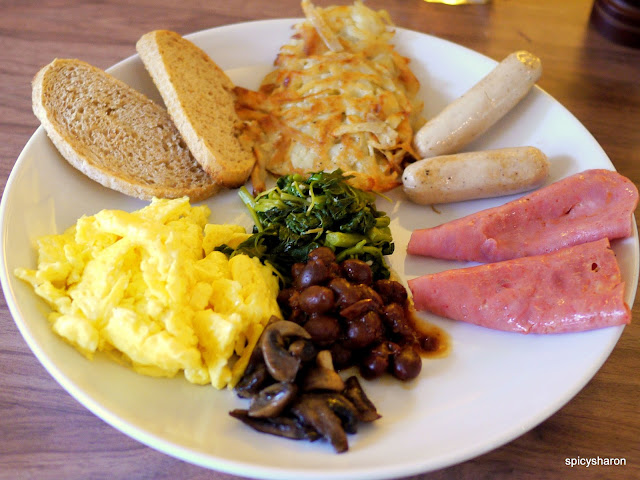 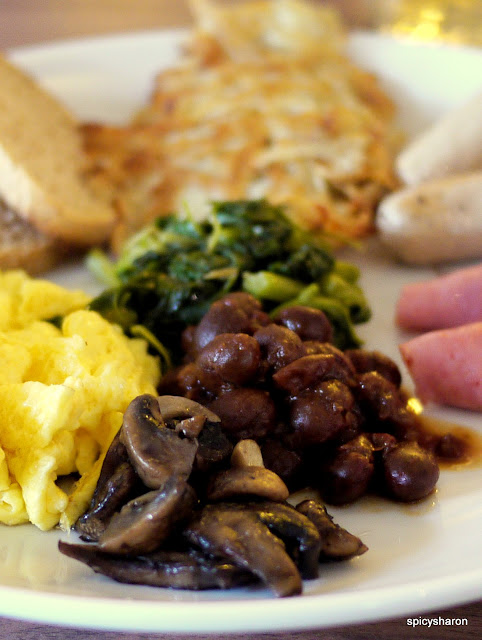 This would not be called the Ultimate brekkie if the plate wasn’t fully loaded.

This is exactly what you’d expect of a big breakfast – eggs, turkey ham, sausages, baked beans, rosti potatoes, sauteed mushrooms, baked beans and toast – it was the ultimate brunch breaker, so good. 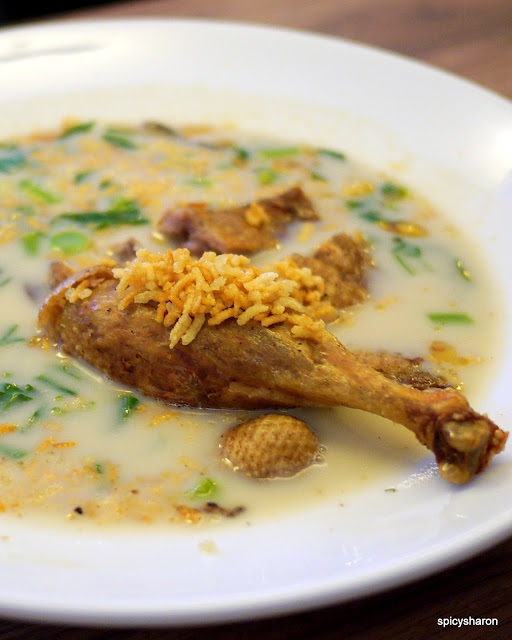 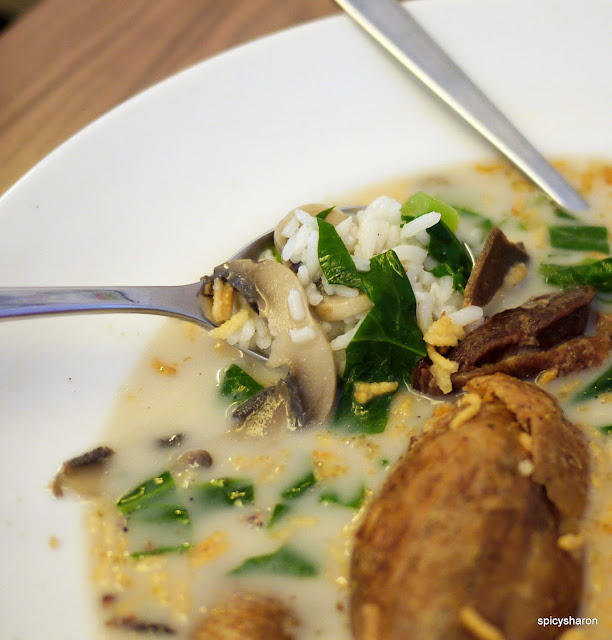 My Pick: If I were to recall a dish which I can still fondly remember and is worthy of recommendation, it would have to be this one.

I have to admit, at hindsight – the dish looked weird. I was expecting a porridge lookalike but it turned out looking much-mushier than I thought.

I scooped a spoon full, with a bit of everything on it, swallowed then smiled. It was actually and unexpectedly scrumptious.

Disclaimer: This dish is an acquired taste. 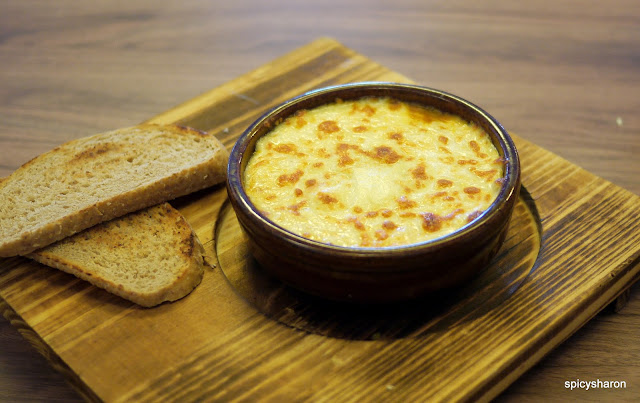 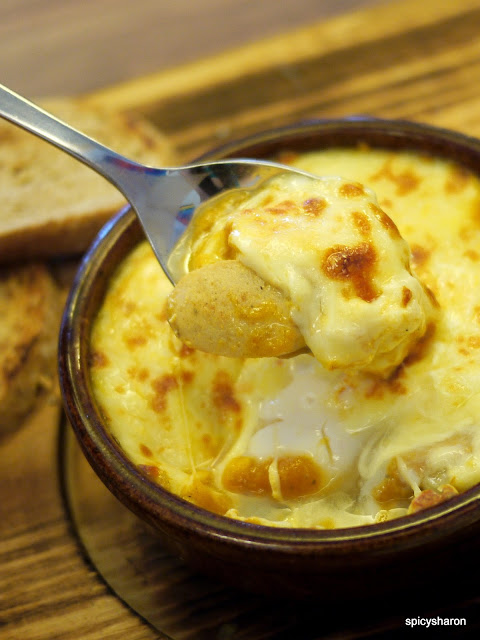 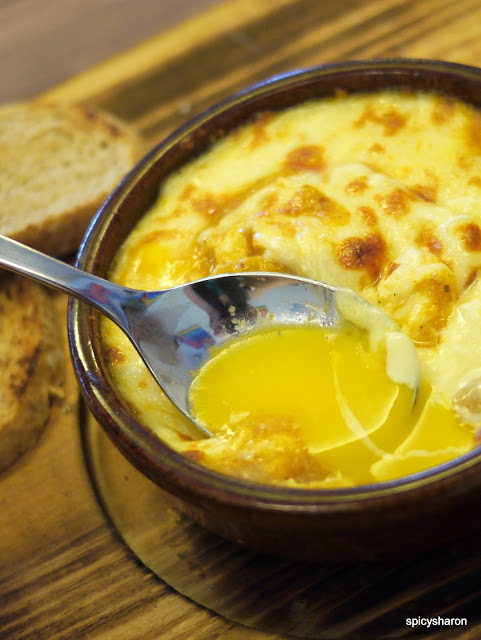 Now – I am being unfair, comparing this with the unbeatable Red Bean Bag version. High expectations come with high hopes right?
The baked cheese was nicely charred and chewy and I welcomed the raw egg yolk covered beneath the blanket, with a smile. The tomato puree on the other hand, barely registered any taste and texture. It was bland and needed a pinch more seasoning. Yet again, I’m not saying that this version is terrible, just not as good – biasness assumed.
Omelette. Rm13.00. 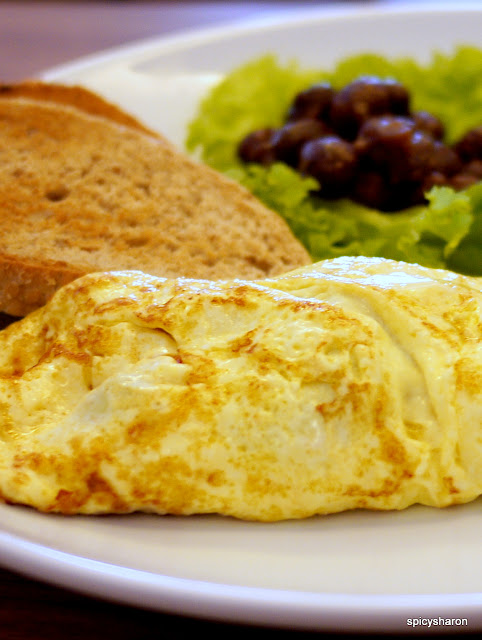 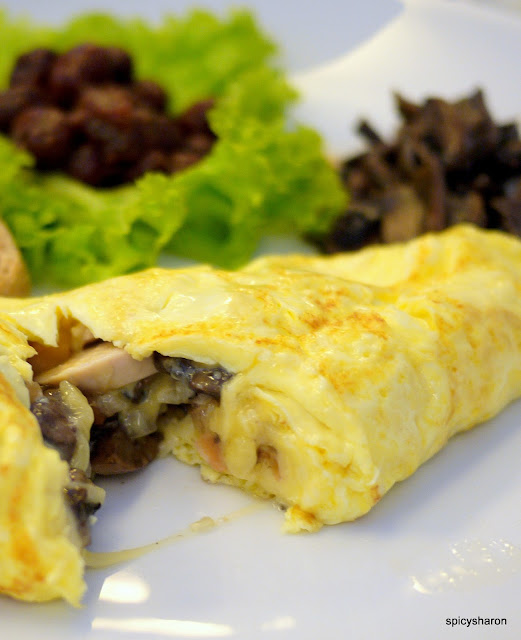 Who can resist the aromatic scent of fresh and fluffy omelettes?

Pan fried and folded delicately into a scrumptious cheese omelette with chicken sausages, mushroom and tomatoes, this was pretty good. It was pleasantly charred on the outside but still moist inside. 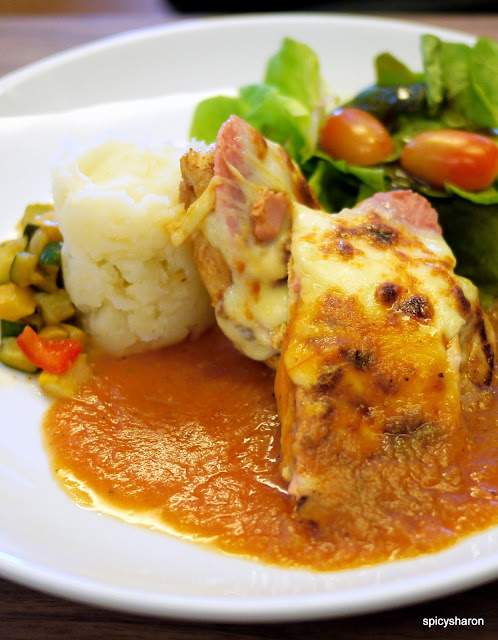 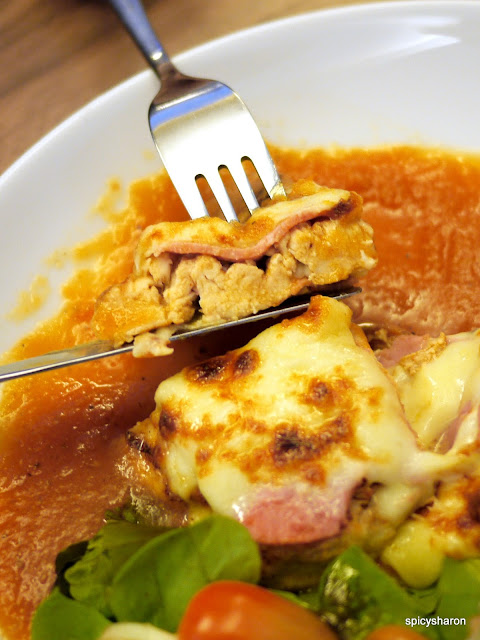 First and foremost, I don’t like photographing red-stuff, red-colored-food I meant. I can never get the balancing of colors right. *so frustrating but still learning – still learning*
The Chicken Parmesan came with a breast fillet layered with ham, lots of tomato puree poured over and melted over a thick wodge of cheese.

Not feeling satisfied with our brunch just yet, I was keen to fill the void with dessert. 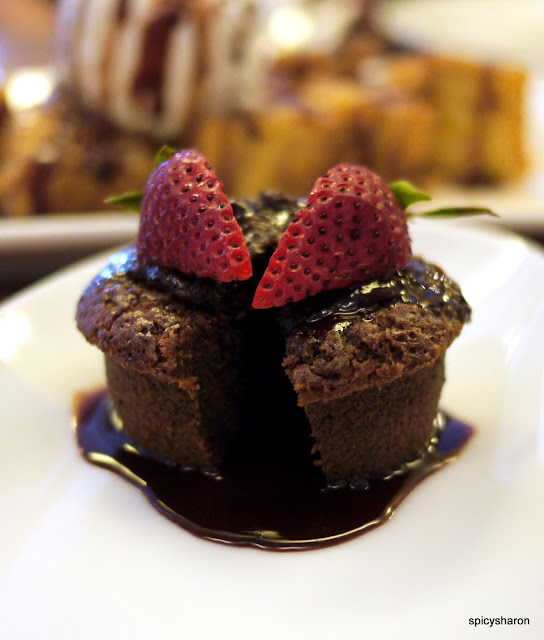 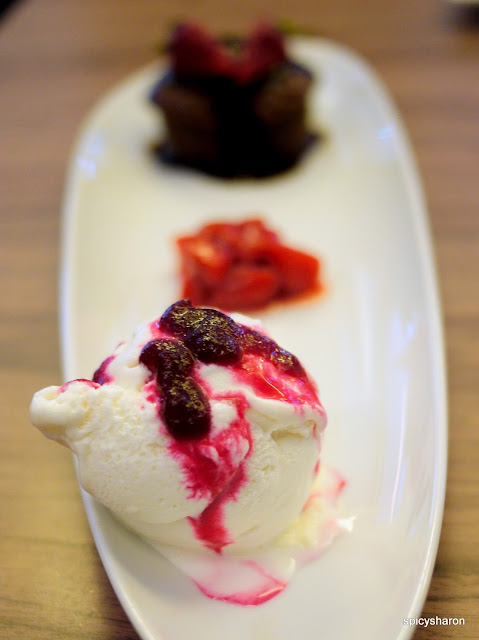 We ordered this because the next table ordered it and it looked too good to be missed. But – it was a massive miss. Dainty desserts have the tendency to look deceiving isn’t it?

The chocolate pudding felt like it came out of a Gardenia bag. It was hard and barely moist in the middle, like chocolate syrup was poured over rather than naturally oozed out. Perhaps so, since the pudding have already been sliced open when served. 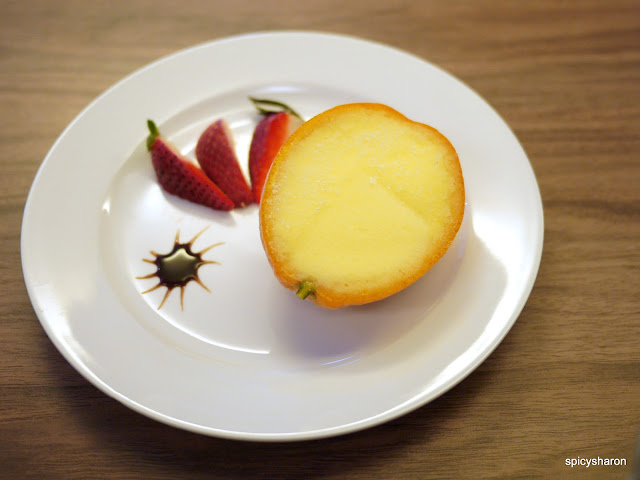 Packed tight into one half of an orange, the sorbet came simple yet refreshing. It could have been a little better in terms of presentation though. 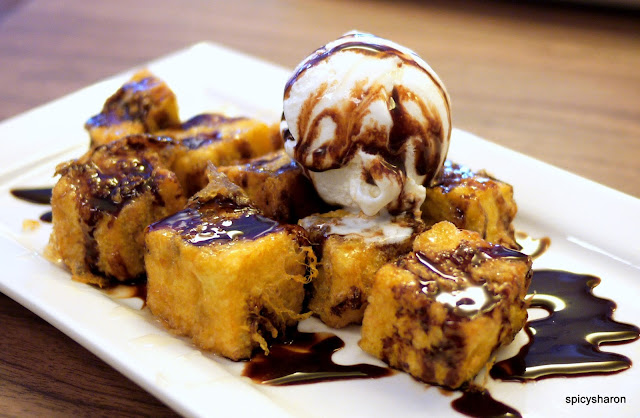 My pick: This dessert is my favourite amongst the lot.

A chunk of French toast sliced thick as a brick, spread with warm chocolate sauce and crowned high with a perfect scoop of vanilla ice cream – all sweet and shiny.

Overall Rating: 6/10. First of all, there’s a fly issue here. I was constantly being bombarded by flies and was frantically fanning it away throughout my meal, thought I was seated at the far end of the restaurant already. Secondly, the coffee needs help. That said, all in all, I would insist that the Ultimate Breakie, Crispy Rice dishes and the French toast ice cream is worth a go. 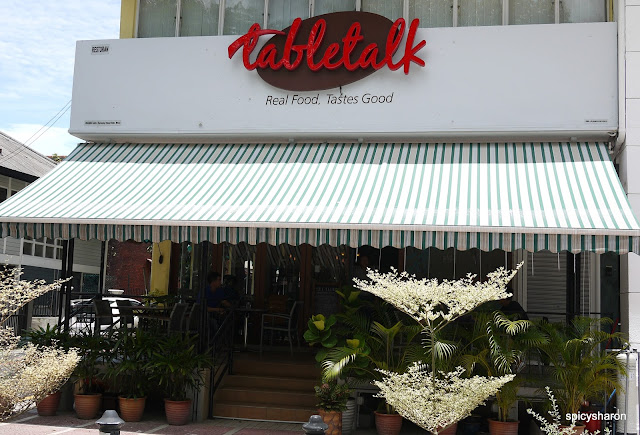 Straight Talk About Drinking Too Much Coffee and Soda