During my Australian University years, I spend a good load of my week-nights being mesmerized by delicious and jaw dropping moments on Masterchef – I was a huge fan.

Given all that, I jumped when I was thrown the chance to meet Amina, extremely psyched up by the opportunity and with much eagerness to feast at Blu Med.

In conjunction with the Ramadan festive spirit, Amina was in Malaysia as part of a global campaign to promote Masterchef Australia in collaboration with Lifetime Channel (Ch709). A little more on that later. 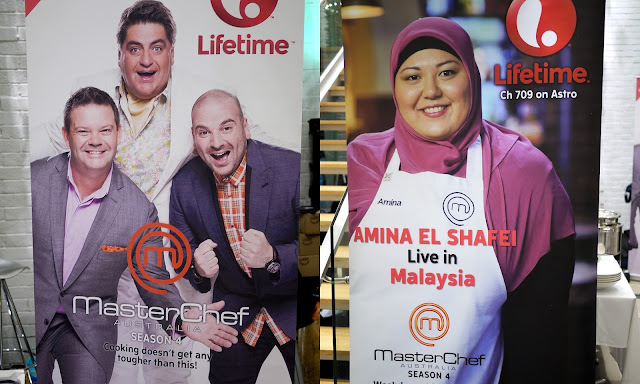 The meet and greet session was held at Blu Med – opened about 6 months ago, smacked in between Gardens and Mid Valley, this spanking posh restaurant serves Mediterranean cuisine downstairs and Italian – Japanese fusion food upstairs. To top that, this restaurant is the baby of former Ironchef Sasajima. One would only have high expectations with such reputation right? 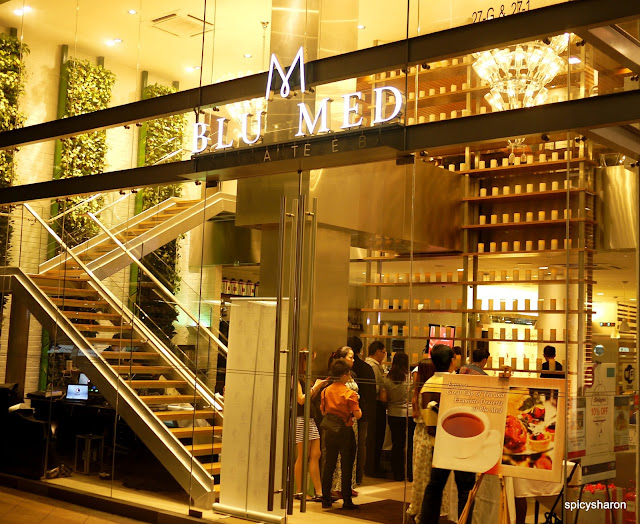 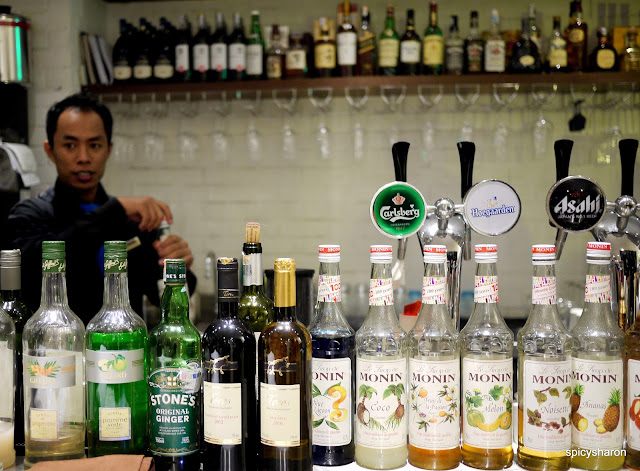 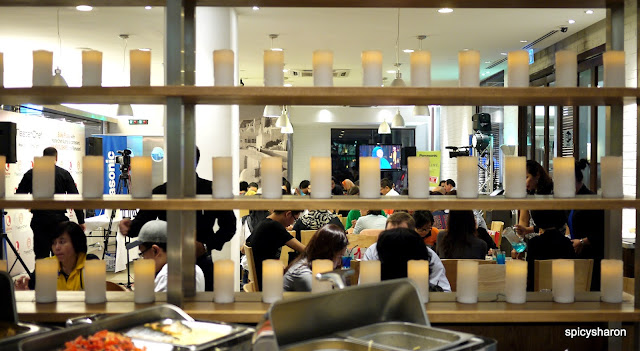 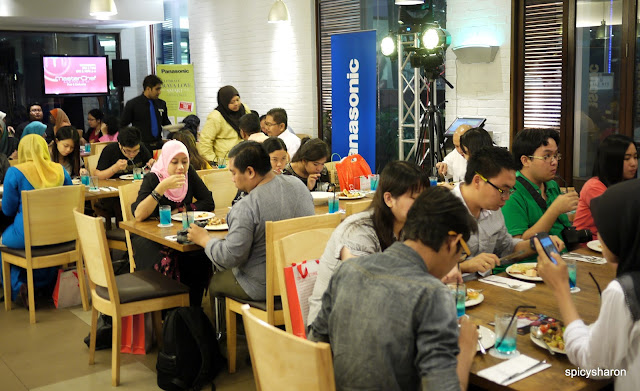 We arrived at the event at a little pass 6.30pm. I’m really not that fat, I just have really-really chubby cheeks. #lol 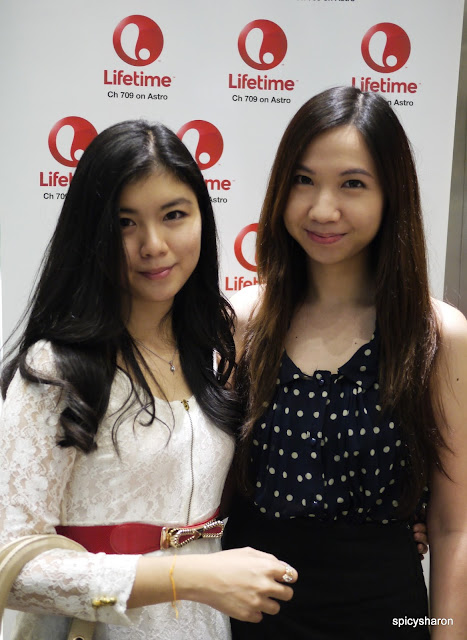 I walked into a busy restaurant, weaving my way through the then hustling and bustling place, filled with chit-chatter of patrons and click-clacking of cutlery. Since dinner was served buffet style, I immediately whipped out my camera and head straight for the buffet spread – to grab dinner and to take pictures of course! 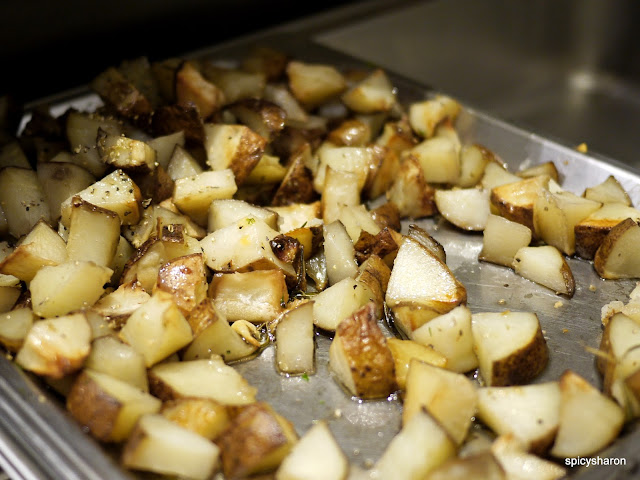 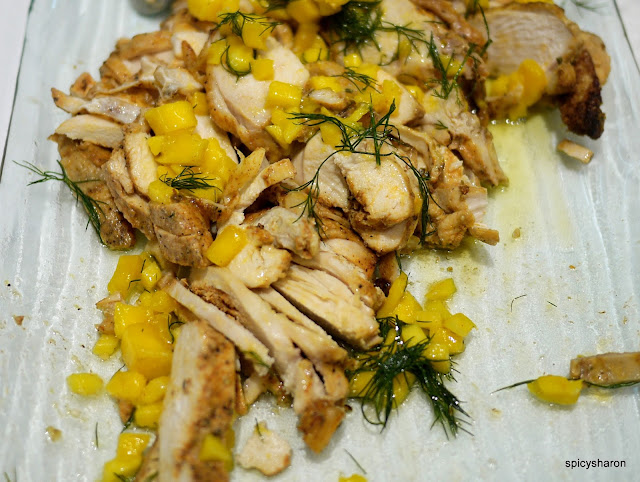 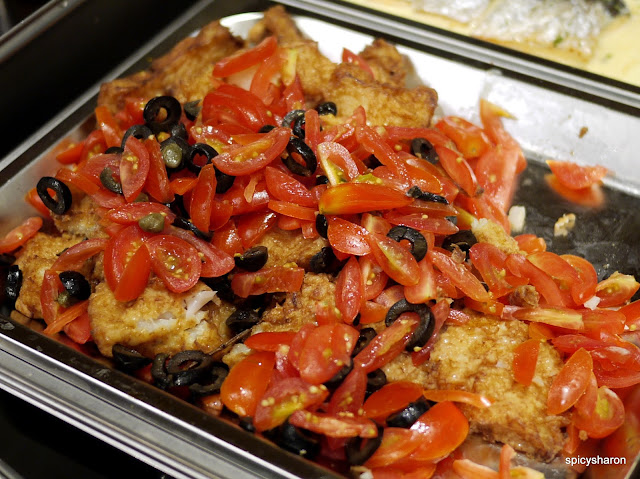 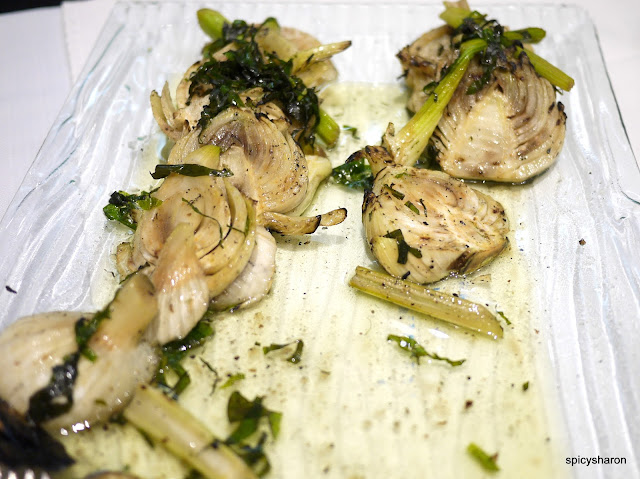 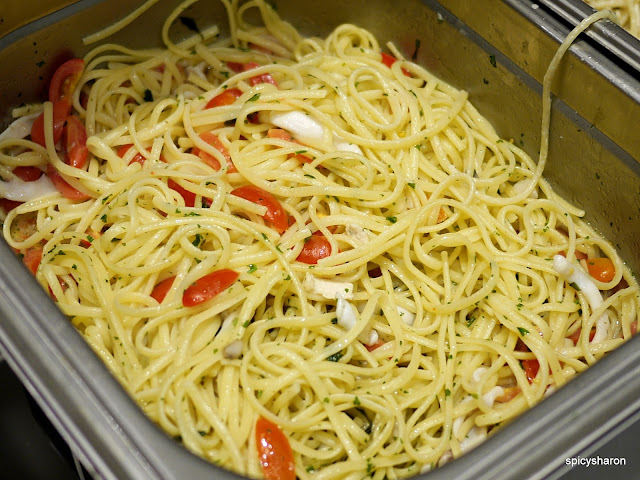 Frankly, the buffet spread was not that impressive – I didn’t have much. 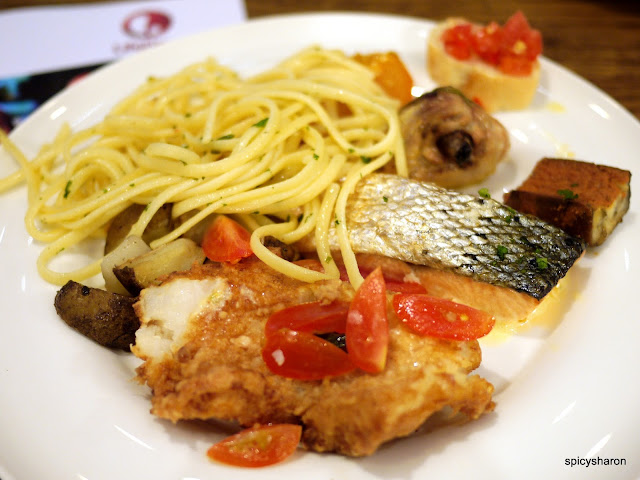 What I did enjoy though, was the tiramisu – coffee infused sponged cake topped with a nice layer of vanilla cream and sprinkled with chocolate powder with mini half-melted chocolate balls thrown in between – I was decadently spoilt. 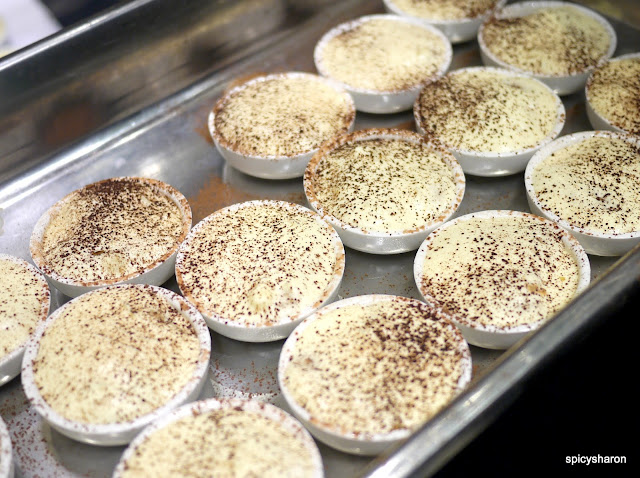 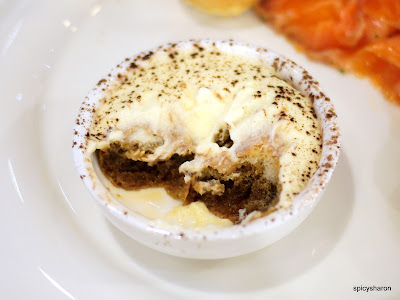 When I was just about done with my dessert, Amina walked in – with a massive aura to boost.

Amina ElShafei is one of the Top 24 that made it to Masterchef Australia Season 4 in 2012. Born and bred in NSW Australia, Amina is of Arab and Korean descent, a full time nurse by day and only 29 years of age! 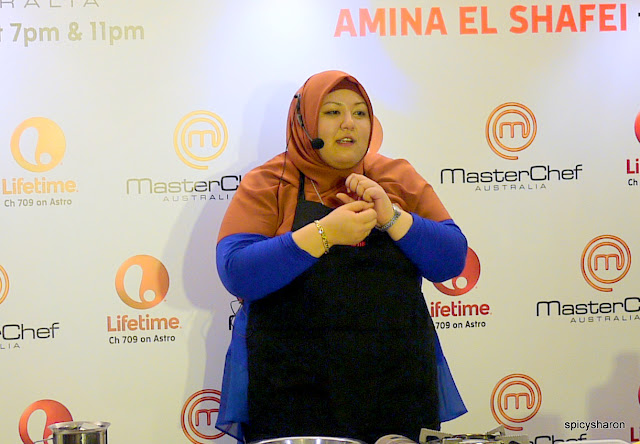 Of customary Masterchef tradition, Amina jumped straight into a Master Class upon arriving and attempted to cook up a storm of one of Malaysia’s popular local delights – steamed pandan cakes with lychee, rambutan and longan in syrup. 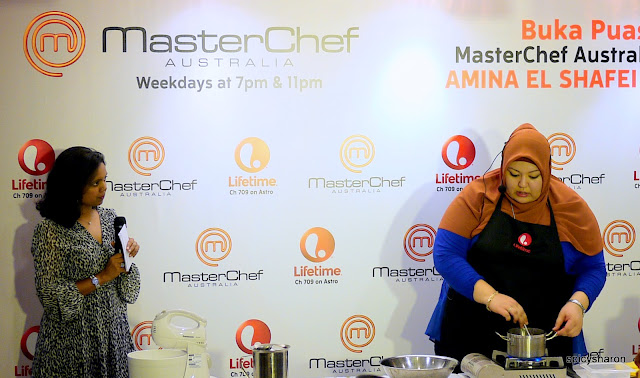 Amina was extremely enthusiastic throughout the entire session and was also kind enough to pause midway for a couple of Q&A’s. 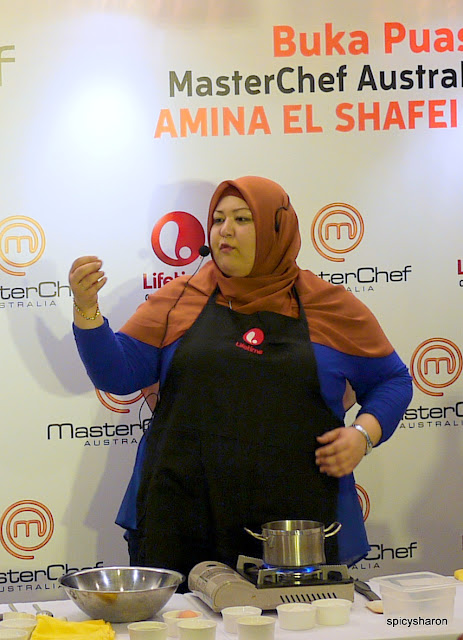 Coming from Malaysia, I’m well aware of the sensitivity faced by Muslims when it comes to handling cooking utensils and being in contact with certain meats.

So, when a fan popped a question on how’d she handled cooking pork during the competition, she simply replied, “I use gloves….. and then I dig into the pork right after”. The entire room burst out in laughter. She was chirpy and humorous, exactly like the Amina I saw on TV. 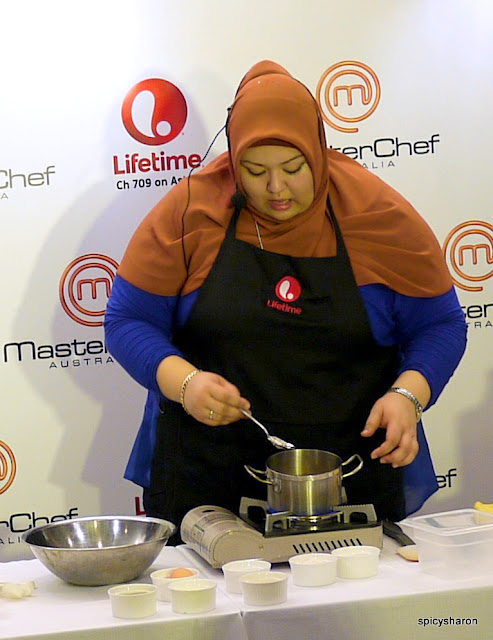 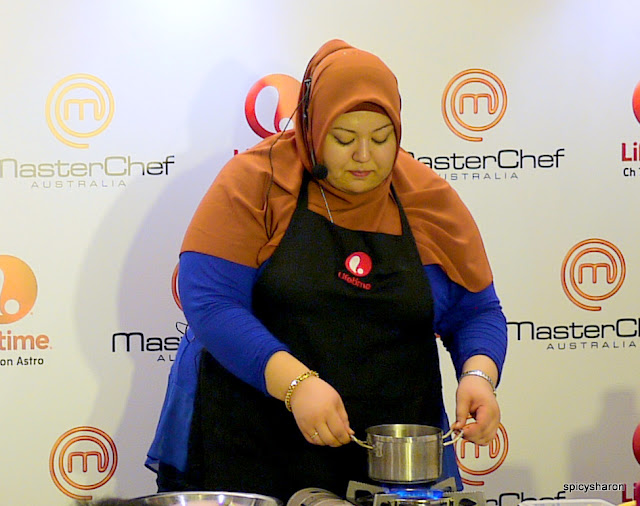 The outcome – a simple and enthralling pandan cake that was incredibly moist and tasted superbly sweet yet gratifying. It reminded me fondly of the Chinese fa-gao but slightly wetter. I was looking around for second servings but sadly, there were limited portions going around. 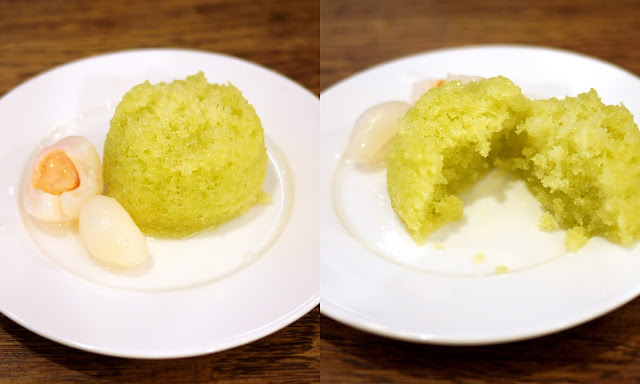 Thank you for coming Amina! 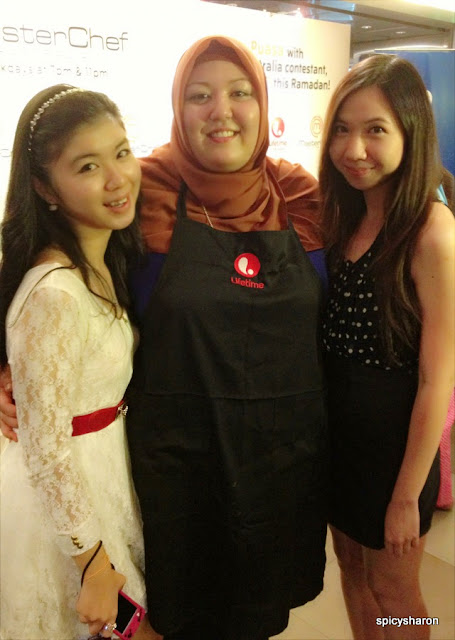 Overall Rating: 6/10. The dessert was fantastic. The event was great. The company was awesome. The food was decent. What more can I ask for?