Pork lovers – what a refreshing and wonderful way to start of the weekend.
It’s been awhile since I’ve last visited Publika, with so many interesting eateries sprouting up in the span of merely months, I have to admit – I have heaps to catch up on.

Ante have been on my ever-growing, to-eat list for a while. So, when an invitation came from
Coffee drinkers, this is for you.
All coffees served here are double shots – Great! Using espressolab coffee beans, the baristas here who are also espressolab trained. My cuppa was pretty good.
Mocktails. Rm12. 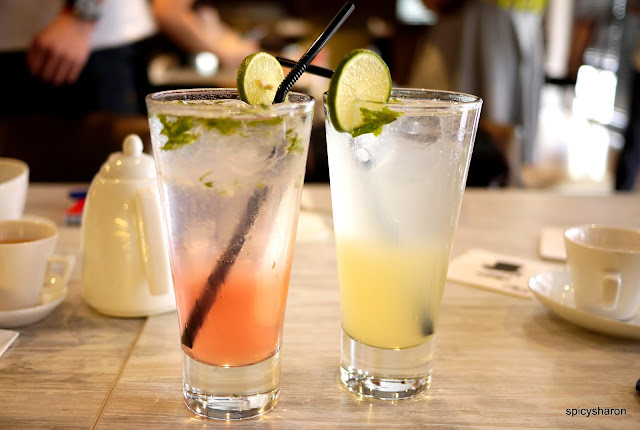 Mocktails! There were too many flavors going around, so I lost track. Anyway, I was told that the banana version did not fair well, so steer clear of that! 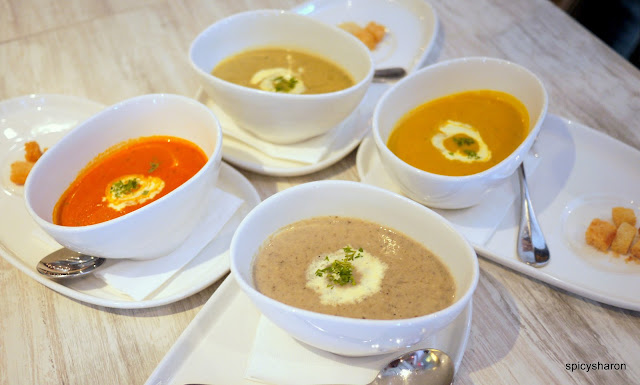 I’m not a huge pumpkin fan per se, but this version was clearly one of the better ones that I’ve had. It had great texture with just the right consistency and a distinct pumpkin taste to boost. For the more conventional mushroom soup lovers, theirs is pretty good too. Give the homemade croutons a go while you’re at it also.
Next up, we had the some light eats.
Enoki Bacon Skewers. Rm26. 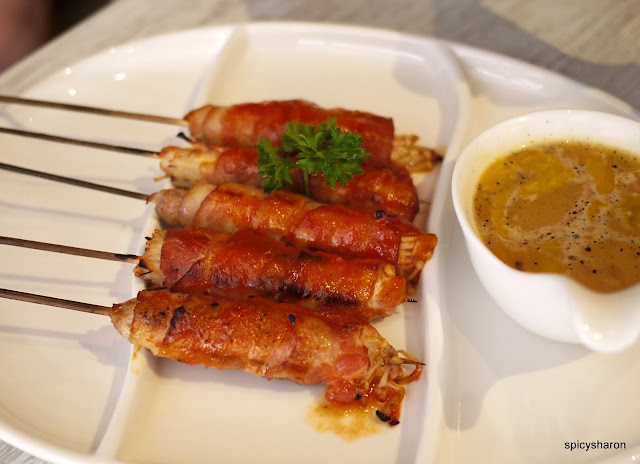 I couldn’t help ogling at that bacon – one of my favorite of the day.

The juicy pork slices and enoki mushrooms wrapped beneath the lashings of crispy bacon was simply mouth watering. The dish also came with teriyaki sauce with a raw egg inside. If not for its price, I wouldn’t mind having a whole serving of this anytime. 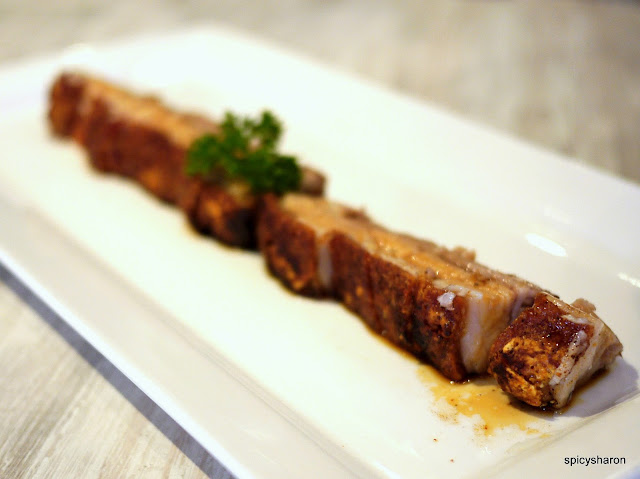 I would secretly recommend this awesome dish to everyone.

The roast pork belly was marinated with a secret ingredient, which to me – tasted a little like caramelized sugar with a tinge of soy sauce. Anyway – it was marvelous.﻿Moving on to the gastronomic meats. 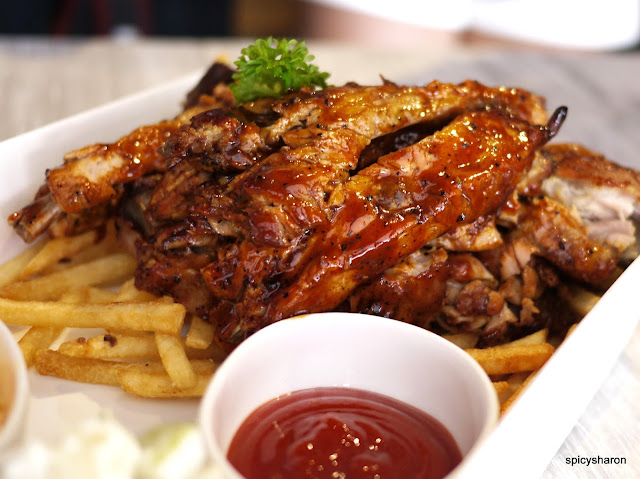 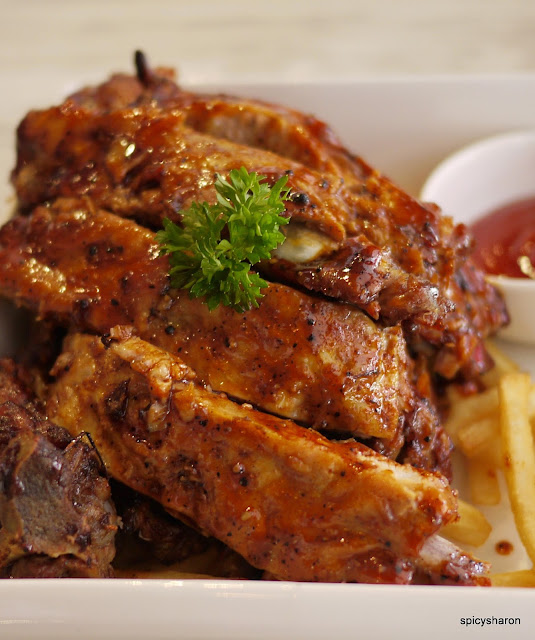 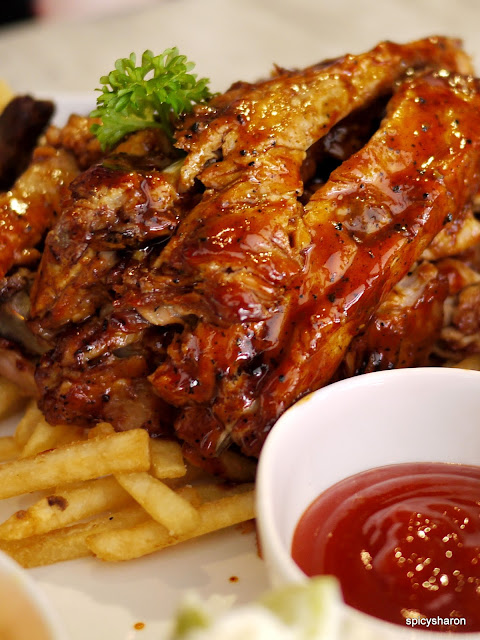 At first glance, I thought – wow, that looks really really good. How can you say no to ribs, seriously?
The ribs smells incredible. The vinegarish aroma from the barbeque sauce hit me almost instantly. The meat was piled high, marinated overnight and cooked real tender, made to slid right off its bones. I figured it could’ve been a teeny-bit more flavourful though. I hinted for seconds, but there wasn’t enough to go around – oh well. 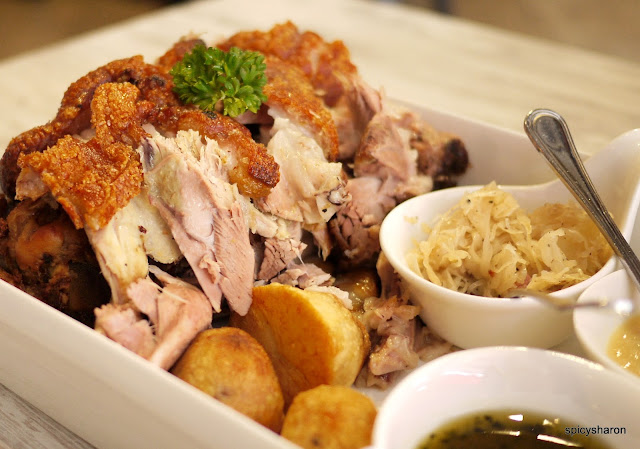 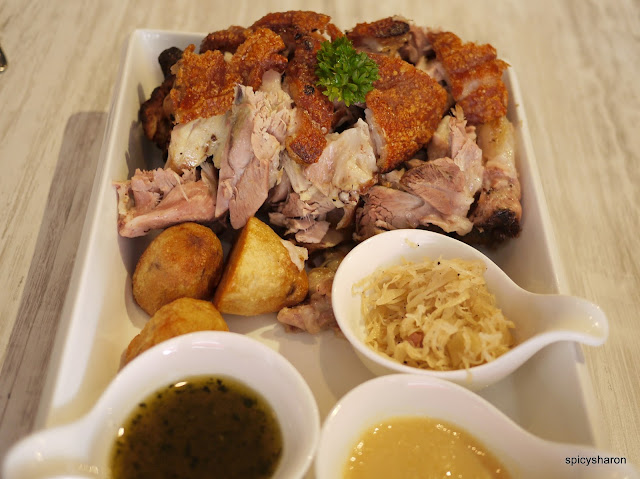 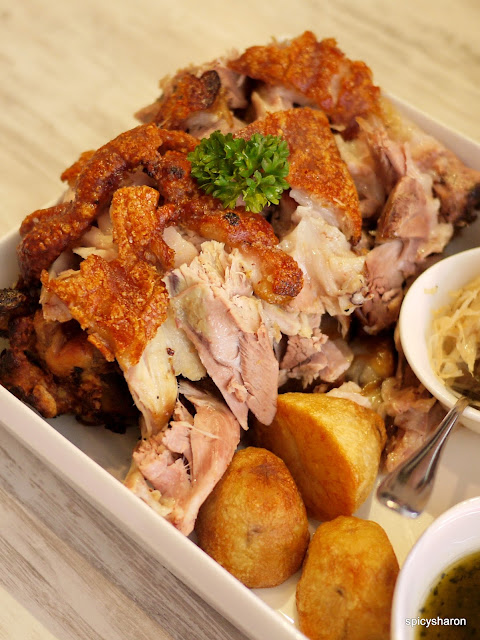 This multiplayer – is meant to be shared. Ante’s version was a good change compared to the more saltier, German versions.

The oven baked pork knuckle came plentiful. Each slice of pork have a savoury and juicy side and also a sinfully crisp side – I was instantly spoilt. Everyone was fighting for the crispy pork skin, I had my fair share and I was well satisfied.

If you are also wondering – the dish also comes with a serving of apple mustard, mint sauce and also with mini bowl of sauerkraut. The sauerkraut needs major tweaking nevertheless.
Ante Pork Burger. Rm28. 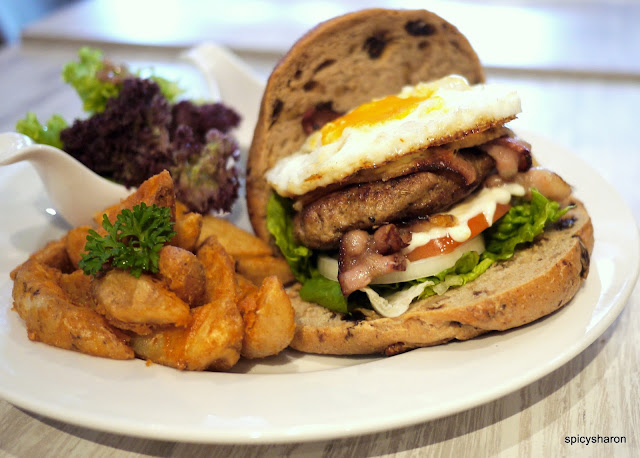 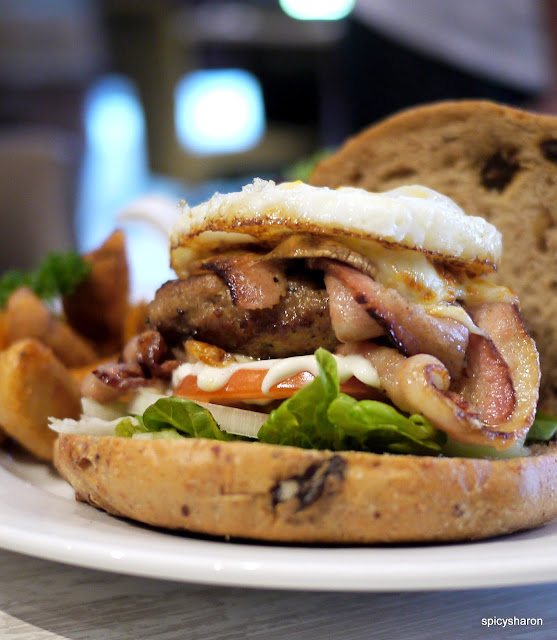 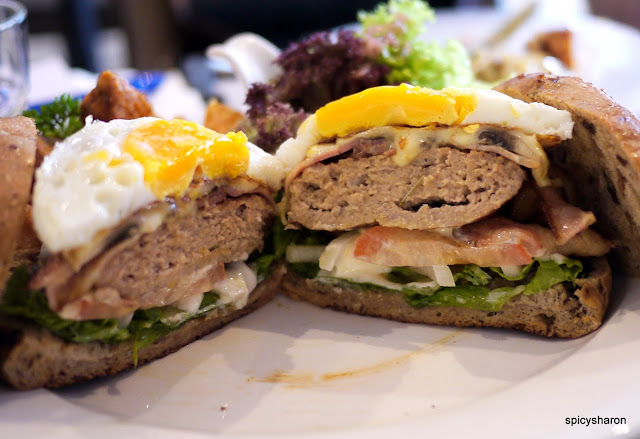 I can never say no to burgers! I was told that this burger is one of the-best pork burger in town!
This gourmet burger was everything that you’d expect – the presentation was appealing, the layered texture of the lots was perfect, the pork patty was flavoursome and the raisin and walnut bun was a clever touch. For that alone though, albeit all my humble compliments, I may think twice on ordering again because of it’s hefty price tag. Perhaps a tinge of truffle add-on? *grins* 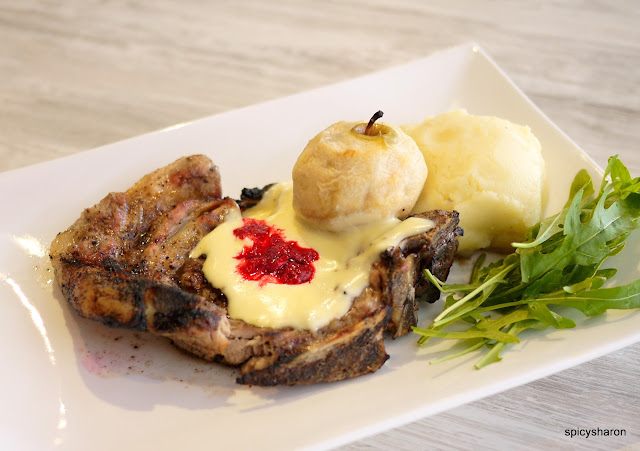 This 360gm prime cut steak was another sweet success.

The steak was cooked well and served with a dash of raspberry cream sauce and a baked apple at the side. Oddly, the combination works quite fine. The baked apple that came warm was a wonderful addition to the dish. Once pry open, it had a mushy texture and basically resembles that of apple pie puree, it did complemented the dish overall. ﻿Volcano Sacrifice. Rm30. 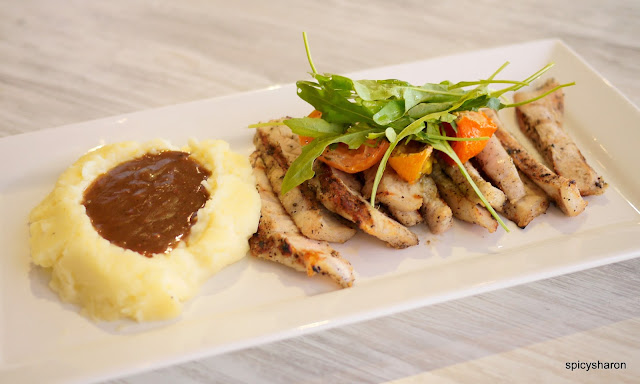 Straight to the point – the grilled pork loin came a little too dry for my liking. The mashed potato and special spicy sauce though, was a great alternative to the more conventional savoury gravy sauce. 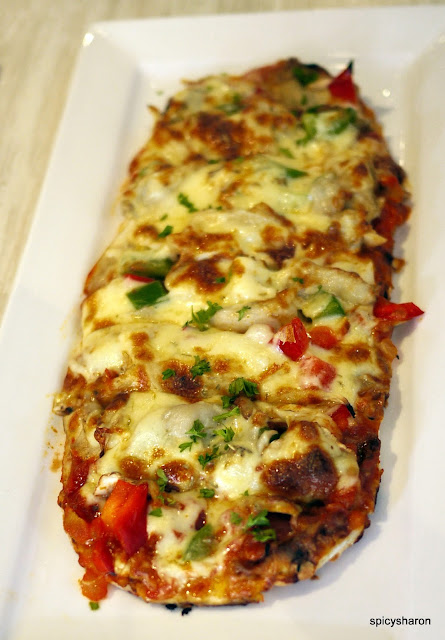 Definitely one for the mushroom lovers.
Topped with a medley of chunky mushroom on a homemade thin crust pizza base, shroom was pretty good. 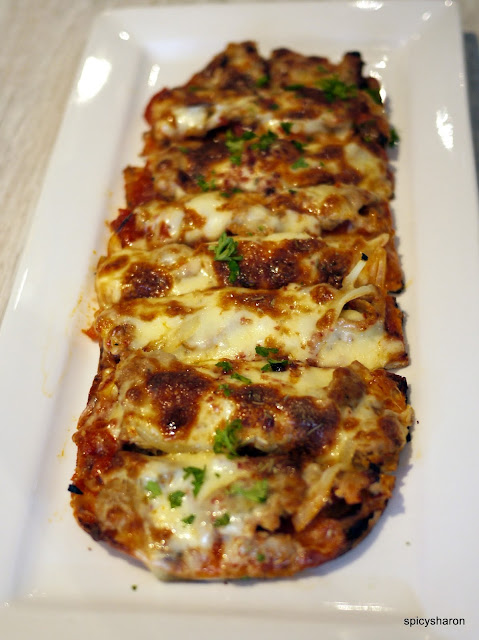 Chorizo and me – paired well.
I folded and popped the whole slice into my mouth at once. The flavours of chorizo immediately popped and I was instantly greeted with crispy and chewy textures – so delish.﻿The Real Bacon Carbonara. Rm26. 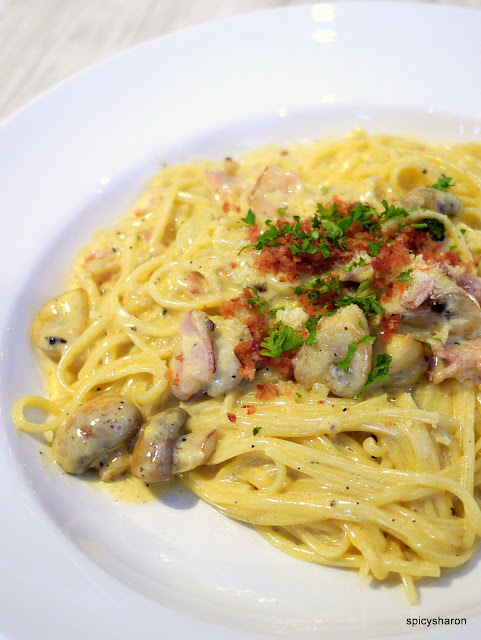 The real bacon carbonara is another dish that came highly recommended by my fellow food bloggers. I was delighted to give it a go and subsequently tantalized with a blanket of rich creamy sauce and spaghetti cooked al dente, it was wonderful.
Curry Cream Pasta. Rm26. 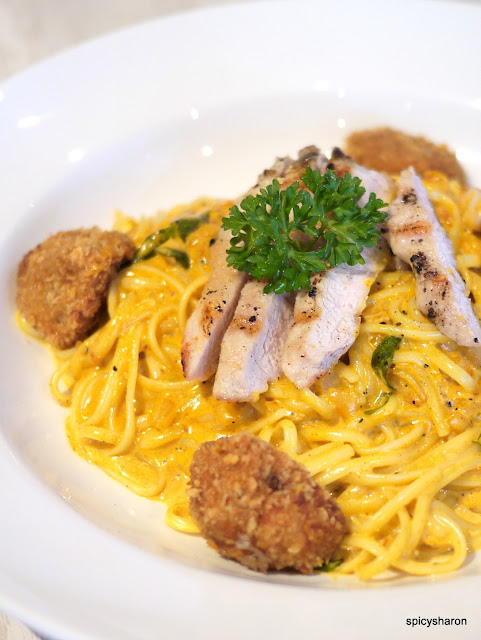 The curry cream pasta on the other hand, was an interesting dish. Fret not, there’s only a tinge …read more