It’s been a while since I last went to the SS2 Pasar Malam (every Monday night), so I thought it’ll be good to check it out again and grab dinner while we’re at it.

The SS2 Pasar Malam is one of the biggest night markets in the country, and almost the same size as the Connaught version (every Wednesday). Parking is usually a tricky affair, but if you’re willing to walk for a few minutes, there are ample parking at the residential area surrounding the SS2 square, where the pasar malam is held.

After walking about a bit, I spotted this Taiping char kuih teow stall situated just opposite McDonald’s restaurant. Seeing that business is pretty brisk, I decided to give it a try.

Of course, I had to order with Hokkien as a standard litmus test to any hawker who claims to be offering Northern food, this one passed.

the char kuih teow stall, opposite McDonald’s at SS2

The plate of char kuih teow (I had kuih teow + mee) that came was quite a good looking one. With an extra egg prepared over-easy that had some sweet soya sauce sprinkled on top, a little bit like the fried egg we had Restaurant Muar at Tengkat Tong Shin, which was a good thing.

it was delicious, did not disappoint at all

There were no prawns in this version of CKT, but luckily plenty of fresh cockles to go around. Execution was great and there was definitely plenty of “wok hei” in this dish. I would not hesitant to order this again. If you’re a char kuih teow lover, check out this version.

At RM 6 a plate with that extra egg, it is a little bit on the expensive side, but I thought it was worth it nonetheless.

After the char kuih teow, we met Edvin, our dive master, by coincidence, and he introduced us this tofu bakar for dessert.

At RM 4.50 a box, you get crispy tofu bakar with prawn crackers, a layer of sweet prawn sauce, chili paste, chicken floss, and some fresh cucumber. It claimed to be from Penang but I’ve never seen anything like this back home. Very tasty nonetheless.

salt baked chicken, I had it for breakfast the next day

Lastly, we also ordered some salt baked chicken to go. The drumstick + thigh version cost RM 7 a piece and made for awesome breakfast the next day, though I imagine it’d be even better if I had some porridge to go with as that’d tone down the saltiness just a bit.

I need to go to the Pasar Malam again! 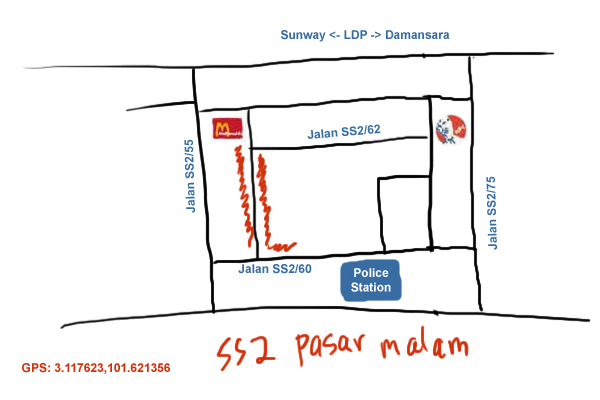